Go to the videotape. 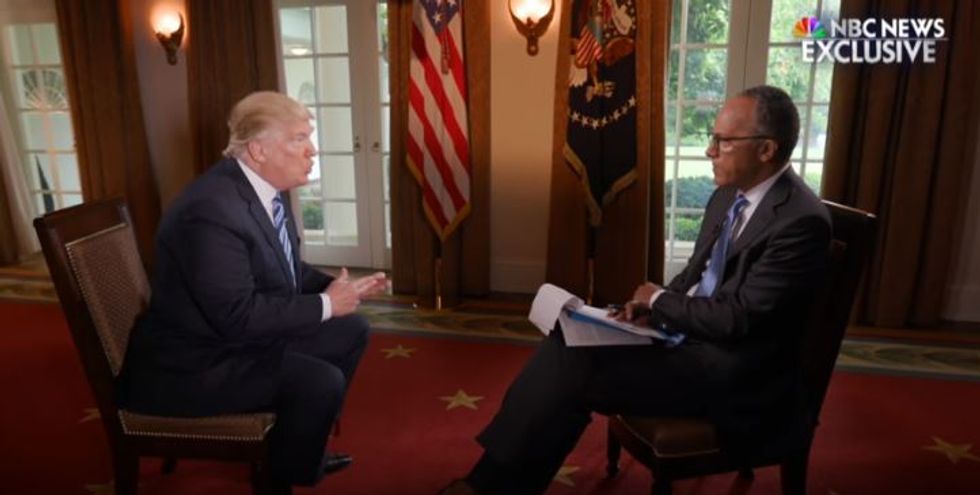 During a routine morning Twitter tirade, President Donald Trump lashed out at news organizations he said were "unable to function" due to their "hatred and extreme bias of me."

The rant primarily targeted the organization he's long perceived to be his arch nemesis: CNN. However, he targeted NBC as well, accusing veteran reporter Lester Holt of "fudging" his tape on Russia.

The hatred and extreme bias of me by @CNN has clouded their thinking and made them unable to function. But actually… https://t.co/IWek2b5bwr
— Donald J. Trump (@Donald J. Trump) 1535626220.0

He then continued his well-established pattern of vilifying the press, once again referring to them as an "enemy of the people."

Now, Twitter users are sharing the video of Holt's interview of Trump, in which the president said he fired former FBI director James Comey for "this Russia thing"--an action perceived by many to qualify as obstruction of justice.

Trump says in the interview:

"I was going to fire Comey knowing there was no good time to do it. And in fact, when I decided to just do it, I said to myself, I said you know, this Russia thing with Trump and Russia is a made up story, it's an excuse by the democrats for having lost an election that they should have won."

Despite his statements on tape, Trump has repeatedly stated that he did not fire Comey because of his refusal to hinder the Russia investigation.

Comey has been the target of much of Trump's anger since he originally stated that Trump had asked him to go easy on former national security advisor Michael Flynn for lying to the FBI.

The relationship only worsened after Comey's firing.

The former FBI director has since written a book and the two hardly hide their mutual dislike on Twitter.

James Comey will be replaced by someone who will do a far better job, bringing back the spirit and prestige of the FBI.
— Donald J. Trump (@Donald J. Trump) 1494415144.0

Despite frequent attacks from the president, Comey hasn't hesitated to call him out--albeit with somewhat more eloquence.

This was the day an American president stood on foreign soil next to a murderous lying thug and refused to back his… https://t.co/QJ67DyOKKS
— James Comey (@James Comey) 1531775179.0

Mr. President, the American people will hear my story very soon. And they can judge for themselves who is honorable and who is not.
— James Comey (@James Comey) 1521308604.0

Lester Holt has yet to issue a response to the president, but it seems clear that Americans aren't going to let the president's accusation go unnoticed.