James Comey Just Explained Step by Step How Donald Trump Gets People Around Him to Do His Bidding, and It Sounds Creepily Spot On 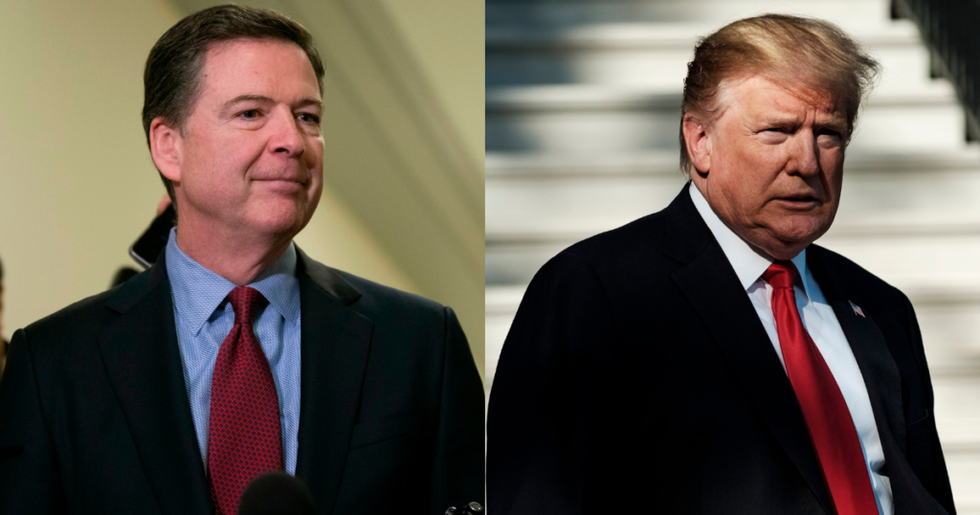 Comey, like much of the country, feels both frustrated and flummoxed with bright minds like Attorney General William Barr caving to and enabling Trump's false narrative on Special Counsel Robert Mueller's investigation into the Trump campaign's role in Russian election interference and the president's multitudinous attempts to obstruct justice.

"How could he write and say things about the report by Robert Mueller, the special counsel, that were apparently so misleading that they prompted written protest from the special counsel himself?" Comey asked of Barr. "How could Mr. Barr go before the Senate Judiciary Committee on Wednesday and downplay President Trump’s attempt to fire Mr. Mueller before he completed his work?"

Deputy Attorney General Rod Rosenstein, who oversaw the Mueller probe and will leave his post on May 11, fares no better in Comey's eyes.

Why did Rosenstein "give a speech quoting the president on the importance of the rule of law?" knowing full well that Mueller implicated Trump on 10 counts of obstruction of justice? Why did Rosenstein "thank a president who relentlessly attacked both him and the Department of Justice he led for 'the courtesy and humor you often display in our personal conversations?'"

Indeed, "people are complicated," Comey wrote, but there is also something deeper.

"Accomplished people lacking inner strength can’t resist the compromises necessary to survive Mr. Trump and that adds up to something they will never recover from."

Trump "eats your soul in small bites," Comey said, and "sitting silent while he lies, both in public and private," makes you "complicit by your silence."

That silence, coupled with Trump's disjointed and "rapid-fire" speaking style, renders checking Trump nearly impossible and "makes everyone a co-conspirator to his preferred set of facts, or delusions."

Comey also lamented the "public displays of personal fealty at places like cabinet meetings," where department heads "talk about how amazing the leader is and what an honor it is to be associated with him."

"So you praise, while the world watches, and the web gets tighter."

Even when Trump attacks our sacred institutions, such as referring to ex-FBI agents as "scum," leaders "are silent," Comey noted. "Because, after all, what are you supposed to say? He’s the president of the United States."

Comey believes that even though career public servants may personally abhor Trump's behavior, their senses of duty force them to "preserve and protect the people and institutions and values you hold dear," while they convince themselves they are "too important for this nation to lose, especially now."

This "will be your contribution, your personal sacrifice for America," Comey said, because those people "are smarter than Donald Trump, and you are playing a long game for your country, so you can pull it off where lesser leaders have failed and gotten fired by tweet."

Comey closes with the biggest challenge of working for Trump:

"Of course, to stay, you must be seen as on his team, so you make further compromises. You use his language, praise his leadership, tout his commitment to values.

And then you are lost. He has eaten your soul."

Comey's take on Trump is on point.

@nytimes What Mr. Comey says certainly makes sense to me. I have asked myself time and time again what causes this… https://t.co/CJpoHSCu4c
— Hope Nelson (@Hope Nelson) 1556732850.0

But some think Barr's eagerness to kowtow to Trump is precisely the reason he was hired.

@nytimes Barr is no leader. He sought out this position for the purposes of protecting this president. Trump didn't… https://t.co/Pa0SGx1UmF
— Steven Hunter ⚛ (@Steven Hunter ⚛) 1556729016.0

@nytimes They even reveal bank-connections, the logic of their limited mind-set & religious preferences without act… https://t.co/rVoZvkfYYp
— Alex Luthiger (@Alex Luthiger) 1556730897.0

Where do we go from here?