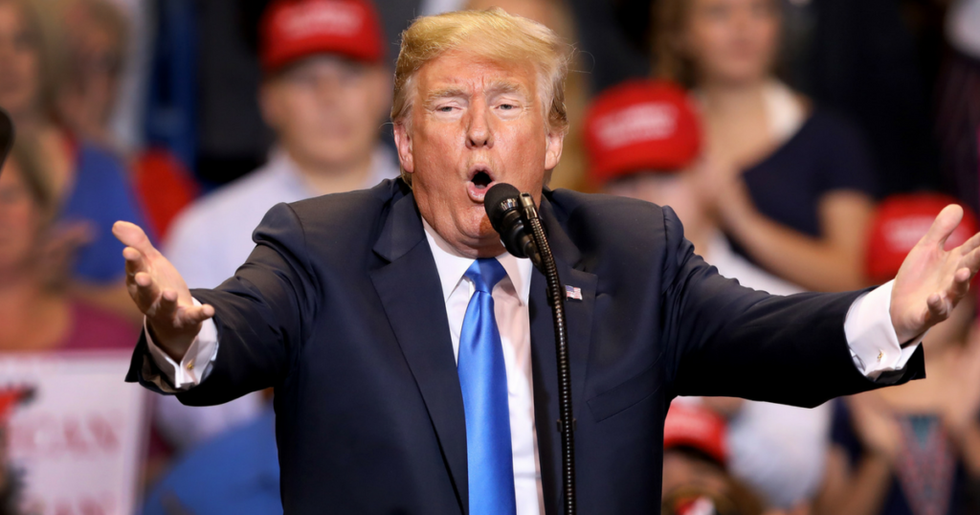 WILKES BARRE, PA - AUGUST 02: President Donald J. Trump singles out the media during his rally on August 2, 2018 at the Mohegan Sun Arena at Casey Plaza in Wilkes Barre, Pennsylvania. This is Trump's second rally this week; the same week his former campaign chairman Paul Manafort started his trial that stemmed from special counsel Robert Mueller's investigation into Russias alleged interference in the 2016 presidential election. (Photo by Rick Loomis/Getty Images)

FBI Agent Peter Strzok, the 22-year veteran intelligence officer who has been in the spotlight for having sent inflammatory text messages about President Donald Trump during the 2016 election, was fired from the agency on Friday.

Strzok is the third high-ranking FBI official involved with the Russia probe and the investigation into Hillary Clinton's email to be fired since Trump took office.

Strzok's attorney Aitan Goelman said the FBI made the decision to terminate his client on Friday even though the office investigating the matter had recommended a 60-day suspension and a demotion.

"The decision to fire Special Agent Strzok is not only a departure from typical Bureau practice, but also contradicts FBI Director Christopher Wray's testimony to Congress and his assurances that the FBI intended to follow its regular process in this and all personnel matters," Goelman said in a statement.

Goelman added that Strzok's firing was a violation of typical FBI disciplinary protocol.

"This isn’t the normal process in any way more than name," Goelman said. "This decision should be deeply troubling to all Americans."

Strzok was removed from Special Counsel Robert Mueller's investigation into the Trump campaign's possible ties to Russia after it was revealed he exchanged text messages with FBI lawyer Lisa Page, with whom Strzok was having an affair.

Page: Trump is "not ever going to become president, right? Right?!"

Strzok told Congress last month that the texts were "off the cuff" and in no way indicated bias in the FBI's probe and that he was confident that the American people would reject Trump's ballistic behavior as a presidential candidate.

Strzok apologized for sending the texts as part of his testimony before Congress.

"At no time in any of these texts did those personal beliefs ever enter into the realm of any action I took," Strzok said. "The suggestion that I'm in some dark chamber somewhere in the FBI would somehow cast aside all of these procedures, all of these safeguards, and somehow be able to do this is astounding to me -- it simply couldn't happen."

The Investigator General at the Department of Justice's June report said Strzok's texts "cast a cloud" over the FBI's role in the investigation, however, the IG stopped short of saying there was any anti-Trump bias within the investigation itself.

This hasn't stopped Trump and his lawyers from citing Strzok's texts as evidence that Mueller's investigation is a "rigged witch hunt" and a "hoax."

Following the news of Strzok's termination from the FBI, Trump took to Twitter to excoriate Strzok and attack Mueller's probe.

Trump claimed Strzok was "in charge of the Witch Hunt" (he wasn't, James Comey was until Trump fired him in May 2017 over "this Russia thing").

In a second tweet, the president said Strzok "was in charge of the Crooked Hillary Clinton sham investigation. It was a total fraud on the American public and should be properly redone!"

Social media rebuked Trump's remarks, noting that the only tactic Trump employs is the character assassination of his critics...

... for the purpose of swaying public opinion, regardless of what the evidence suggests.

Like Strzok's lawyer, some feel Strzok was fired for political reasons - and they reminded Trump of his historic unpopularity.

@realDonaldTrump So you fire Peter Strzok for Political reasons, I hope he sues the Hell out of you and tells every… https://t.co/eOFIMcXZIR
— Vicky @ Resister (@Vicky @ Resister) 1534179069.0

@realDonaldTrump Here we once again have the sitting POTUS… demanding an investigation of his former political oppo… https://t.co/zpvvNJK4nn
— Ryan Hill (@Ryan Hill) 1534176722.0

The "witch hunt" is finding an awful lot of witches.