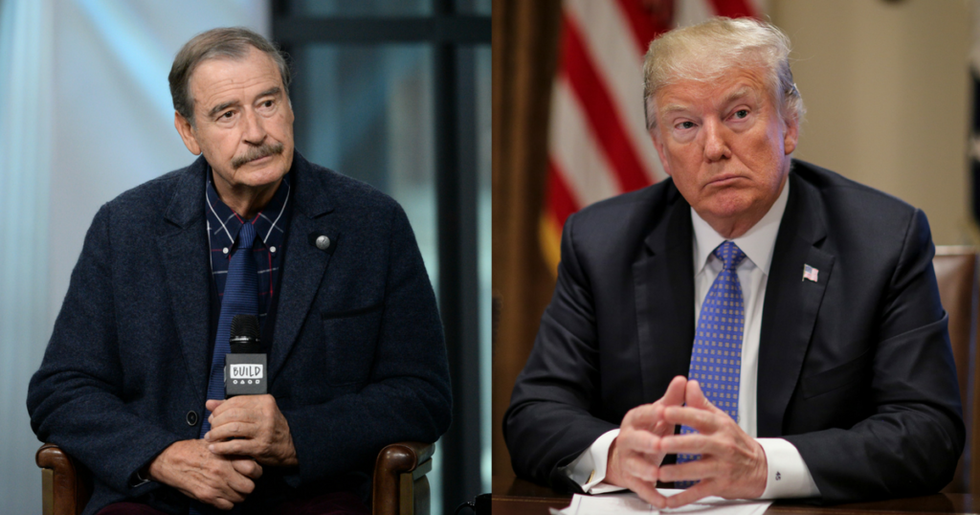 Former Mexican President Vicente Fox, perhaps best known in the United States for his social media sparring with President Donald Trump, has once again trolled Trump on Twitter, this time over the firing of FBI Agent Peter Strzok.

Strzok, one of our nation's most accomplished counterintelligence officers, was fired last Friday because he sent anti-Trump texts to FBI lawyer Lisa Page prior to the 2016 presidential election. Strzok led the election-era investigation into Hillary Clinton's use of a private email server during her time as Secretary of State.

Trump boasted in a Monday tweet that "the Crooked Hillary Clinton investigation" was a "sham." He then called for the Clinton email probe to be reopened.

It was a total fraud on the American public and should be properly redone!

Fox responded with his own version of the tweet that used Trump's own words against him.

I would love to read a tweet that says:

Just fired @realDonaldTrump, now former president of the U.S., was in charge of the most crooked administration ever. It was a total fraud on the American people and should be properly corrected.

Reactions poured in on social media. Many found Strzok's firing to be a disturbing, politically-motivated maneuver.

@VicenteFoxQue @realDonaldTrump Strzok was one of FBI's top spycatchers. This firing is an assault on the Republic. Is anyone LISTENING?
— #ImpeachTrump (@#ImpeachTrump) 1534179131.0

Though some dreams are more farfetched than others.

The American people get their first referendum on Trump in the November midterm elections in 85 days.

Strzok is the third high-ranking FBI official involved with the Russia probe and the investigation into Hillary Clinton’s email to be fired since Trump took office.

Trump fired FBI Director James Comey in May 2017 over the investigation into the Trump campaign's ties to Russia. Comey's deputy, Andrew McCabe, was fired in March of this year just hours before he was set to retire to full benefits.

Strzok had previously been removed from Special Counsel Robert Mueller’s investigation into the Trump campaign’s possible ties to Russia after it was revealed he exchanged text messages with fellow agent Lisa Page, with whom Strzok was having an affair.

Page: Trump is “not ever going to become president, right? Right?!”

Strzok told Congress last month that the texts were “off the cuff” and in no way indicated bias in the FBI’s probe and that he was confident that the American people would reject Trump’s ballistic behavior as a presidential candidate.

Strzok apologized for sending the texts as part of his testimony before Congress.

“At no time in any of these texts did those personal beliefs ever enter into the realm of any action I took,” Strzok said. “The suggestion that I’m in some dark chamber somewhere in the FBI would somehow cast aside all of these procedures, all of these safeguards, and somehow be able to do this is astounding to me — it simply couldn’t happen.”