Donald Trump Was Just Asked Whether He Has Confidence In His Intelligence Chiefs, and His Response Was So Trump It Hurts 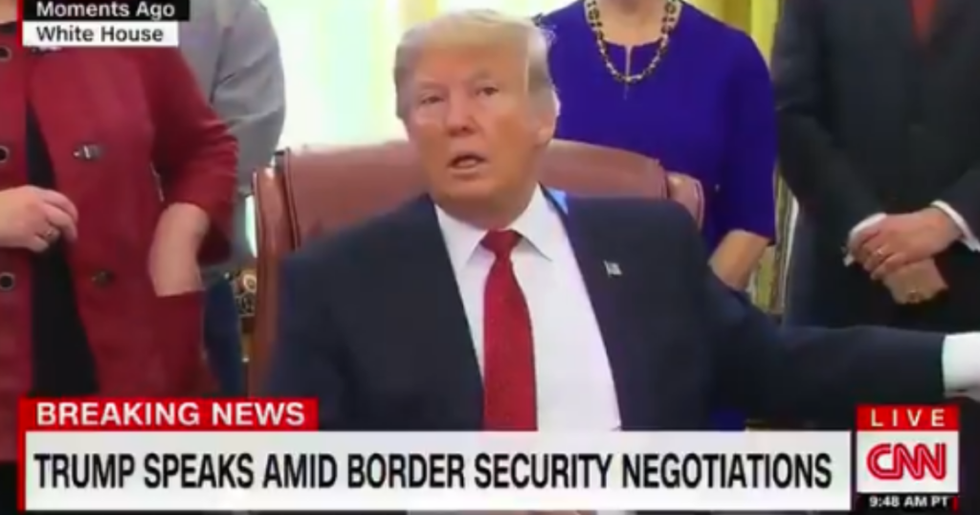 President Donald Trump said Thursday he does not have confidence in two top American intelligence officials.

CIA Director Gina Haspel and Director of National Intelligence Dan Coats testified before the Senate Intelligence Committee on Tuesday and contradicted Trump's own claims about North Korea, ISIS, and Iran.

On Thursday, during a break in the negotiations to keep the federal government open past February 15, Trump was asked by a reporter if he has "confidence in Gina Haspel and Dan Coats" to give "good advice."

The president said "no."

"No, I disagree with certain things that they said. I think that I'm right, but time will prove that. Time will prove me right probably."

Trump thinks he will be vindicated... "probably."

Trump has maintained that North Korea is denuclearizing; that ISIS has been defeated; and that Iran is trying to build a nuclear weapon.

The president has not - ever - offered a single piece of evidence to back up what he says.

@kylegriffin1 Why has the press not asked where he’s getting his information. Who are his investigators since it’s… https://t.co/euRC6vp4oV
— Plant Kindness 🐝 (@Plant Kindness 🐝) 1548963399.0

@kylegriffin1 I know they have a lifetime of experience and an army of people compiling and analyzing facts and inf… https://t.co/jfgUBUK9x9
— Cal_HAM (@Cal_HAM) 1548961959.0

@kylegriffin1 The most flagrant and blatant example of the Dunning-Kruger effect ever seen.
— Tom Baker (@Tom Baker) 1548961703.0

@kylegriffin1 So just because he believes something does not make it true. He does not live in a fact-based world
— Vicki Snowflake (@Vicki Snowflake) 1548961407.0

This makes our country, and the world, far less safe.

@kylegriffin1 This should scare everyone oh, that he thinks he knows more that our intelligence community. We all k… https://t.co/Jqx6XnKuGy
— Tim Mcbrim (@Tim Mcbrim) 1548966713.0

@kylegriffin1 After he leaves, every major US institution will have been diminished or besmirched. Such is the coll… https://t.co/3s3uKYa4x1
— Daniel Johnson (@Daniel Johnson) 1548961449.0

Congressman Ted Lieu (D-CA) even kindly offered Trump a 'whom to trust' guide for intelligence sourcing.

Meanwhile, Haspel and Coats—both of whom were appointed by Trump—refuted all of Trump's claims in their Senate testimony, citing the latest intelligence.

Trump, however, is willfully impervious to information that does not perfectly align with his self-generated world view.

This is not good.

@kylegriffin1 The way his face twitches here reminds me of his expression when Hillary brought up Russia in one of… https://t.co/tjP4aE6ZiF
— debbie downer (@debbie downer) 1548961352.0

@kylegriffin1 If he doesn't get intel briefings, how does he know they're wrong? Where is he getting his informatio… https://t.co/3JSeVMVMkj
— Snarky Tweeter (@Snarky Tweeter) 1548961448.0

People are concerned about what lengths Trump will go to in order to be 'right.'

Those fears were stoked on Wednesday when Trump swiped at Coats, Haspel, and other intelligence leaders for disagreeing with him.

"Perhaps intelligence should go back to school," the president balked on Twitter, having repeated his fake news about Iran.

The Intelligence people seem to be extremely passive and naive when it comes to the dangers of Iran. They are wrong… https://t.co/PEJcIG3Gde
— Donald J. Trump (@Donald J. Trump) 1548856255.0

Note Trump's misuse of 'there' while implying others are uneducated.