To "Deter Movement" at Border, Homeland Security Wants to Leverage the Kids 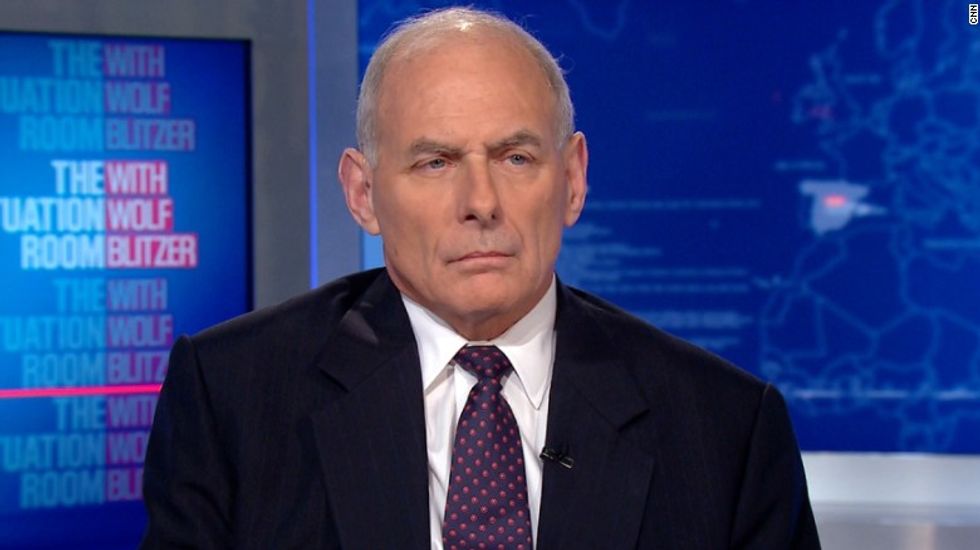 The Department of Homeland Security is considering separating children from their parents at the border, DHS Secretary John Kelly said Monday. The move is part of a broader effort to deter the exploitation of children and to discourage families from making the trek from Mexico across the U.S. border. Currently, families contesting deportation or applying for asylum are generally released from detention quickly, and able to stay in the country, pending disposition of their cases.

"We have tremendous experience of dealing with unaccompanied minors," Kelly told CNN's Wolf Blitzer on The Situation Room. "We turn them over to [Health and Human Services] and they do a very, very good job of putting them in foster care or linking them up with parents or family members in the United States... Yes I'm considering [that], in order to deter more movement along this terribly dangerous network. I am considering exactly that. They will be well cared for as we deal with their parents. ... It's more important to me, Wolf, to try to keep people off of this awful network."

Earlier this week, a senior DHS official confirmed to CNN that the Department would consider implementing the policy. "We are trying to find ways to deter the use of children in illegal immigration," he said at the time. "We are seeing kids essentially kidnapped and used to get here and stay." Children are being exploited in numerous ways, the official added, citing parents taking them on dangerous journeys and smugglers and non-parents who claim the children as their own in bids to enter and stay in the United States.

In a statement to CNN, DHS spokesman David Lapan expressed similar concerns, saying the agency "continually explores options that may discourage those from even beginning the journey." The "journey north is a dangerous one," he said, "with too many situations where children -- brought by parents, relatives or smugglers -- are often exploited, abused or may even lose their lives."

The statement received a harsh rebuke from Representative Henry Cuellar (D-Texas) whose district includes about 200 miles of the U.S.-Mexico border. "Bottom line: separating mothers and children is wrong," he said. "That type of thing is where we depart from border security and get into violating human rights."

According to Leon Fresco, who led the Office of Immigration Ligation under President Barack Obama, the previous administration considered, but ultimately rejected, the move. "It was never implemented because the idea was that it was too detrimental to the safety of the children to separate them from their parents, and the thinking was it was always preferable to detain the family as a unit or release the family as the unit," Fresco said.

Fresco added that the ruling in Flores v. Lynch also factored into the administration's decision. The United States Court of Appeals for the Ninth Circuit ruled that detaining children violated a long-standing agreement that bars the government from detaining children in a jail-like setting, even if they are accompanied by their parents. Immigration officials apprehended 54,000 children and their guardians between Oct. 1, 2016, and Jan. 31, 2017, more than double the number caught over the same time period a year earlier, according to one report.