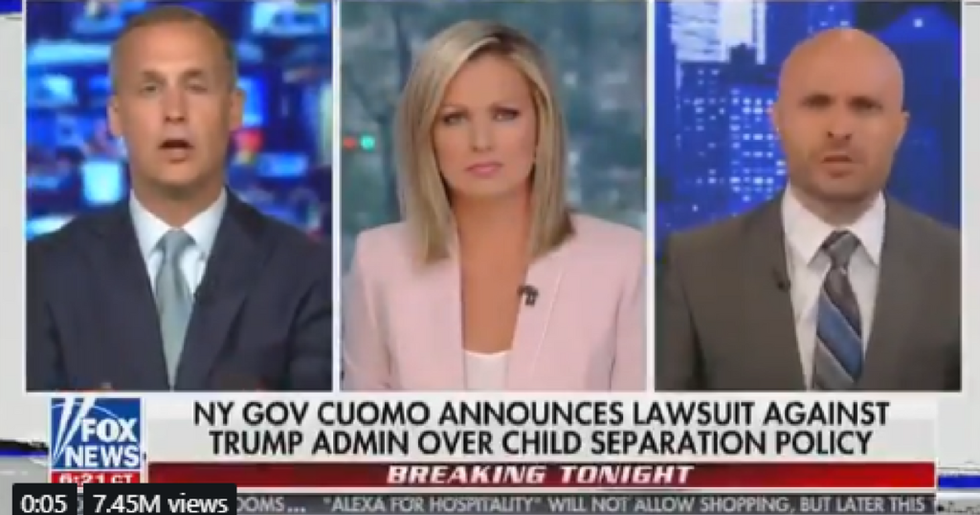 Mexico’s Foreign Affairs Secretary Luis Videgaray held a press conference on Tuesday in which he mentioned that one of the children separated from their parents at the U.S.-Mexico border was a 10-year-old girl with down syndrome.

In an appearance on Fox News Tuesday night, President Donald Trump's former campaign manager Corey Lewandowski mocked the 10-year-old girl's experience, which was a result of Trump's "zero tolerance" policy that separates children from their parents at our southern border.

"I read today about a 10-year-old girl with down syndrome who was taken from her mother and put in a cage," said Democratic strategist Zac Petkanas.

"Womp, womp," Lewandowski callously interrupted. Petkanas then tore into Lewandowski, who attempted to clarify his remarks but was completely outgunned by and enraged Petkanas.

Videgaray had said the girl and her brother were just two of more than 2,300 children that have been separated from their parents in the last six weeks. The girl's father is reported to be a legal U.S. resident.

NBC's Megyn Kelly slammed Lewandowski, saying "there is no low to which this coward Corey Lewandowski won’t sink."

There is no low to which this coward Corey Lewandowski won’t sink. This man should not be afforded a national platf… https://t.co/iHgd18bfkV
— Megyn Kelly (@Megyn Kelly) 1529454741.0

Another user said Lewandowski has "earned a special place in Hell."

@passantino @Zac_Petkanas Sometimes I want to reach into my phone and personally slap some common sense into this disgrace of a human being.
— CLawGrL🇵🇷🇺🇸 (@CLawGrL🇵🇷🇺🇸) 1529452175.0

@passantino @Zac_Petkanas .@CLewandowski_ keep defending this monster @realDonaldTrump. See where it lands you in the after life.
— jimmy williams (@jimmy williams) 1529452183.0

It's only Wednesday, but Fox News has been outdoing itself this week.

Attorney General Jeff Sessions went on Fox News Monday night to defend the Trump administration’s “zero tolerance” border policy, which has resulted in nearly 12,000 migrant children being placed in detention centers, a policy that some have compared to Nazi concentration camps.

Sessions explained to Laura Ingraham that these claims are “exaggerations,” because “in Nazi Germany, they were keeping the Jews from leaving the country.”

Children, like the 10-year-old girl with down syndrome, are being kept in large cages, many of which are lit 24/7, rendering sleep impossible. Many kids are sleeping on mats on the floor, and are only allowed outside for 1-2 hours per day.

Parents and children have described the conditions in the detention centers as “freezing cold” and lacking “good food.”

On Monday, Wikipedia added the detention centers to its list of concentration camps, citing the crowded conditions and abuse children are facing from being separated from their families.

Sessions, a member of United Methodist Church, is facing calls from his congregation that he should be charged with child abuse over the family separation policy, which he enacted last month.