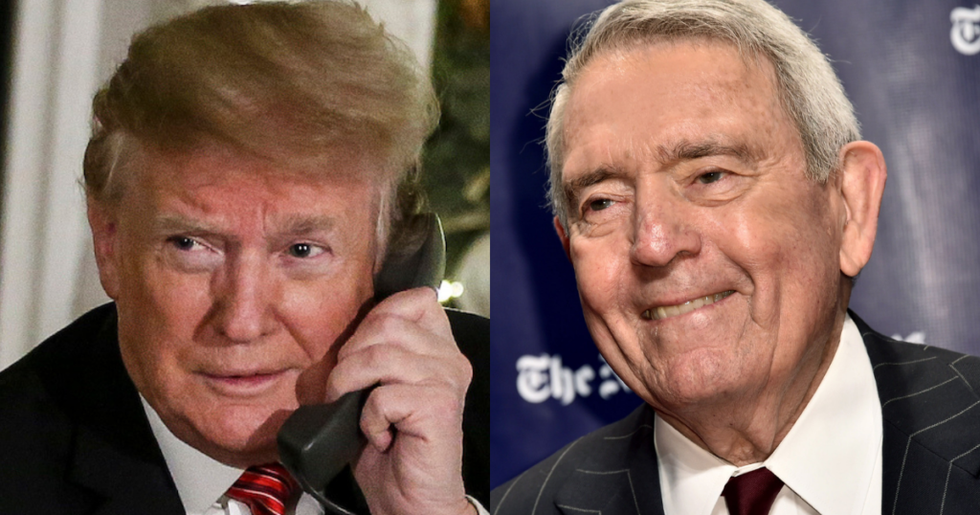 After President Donald Trump belittled a seven-year-old girl's belief in Santa Claus as "marginal," news legend Dan Rather challenged Trump to apply the same standard to his denial of climate change.

"Are you still a believer in Santa?" Trump asked on a Christmas Eve call with children monitoring NORAD's Santa tracker. "'Cause at seven, it's marginal, right?"

Last month, Trump gave his latest excuse for refusing to accept the reality of climate change in the face of overwhelming empirical data and scientific consensus.

"One of the problems that a lot of people like myself, we have very high levels of intelligence, but we're not necessarily such believers," Trump told WaPo. "As to whether or not it’s man-made and whether or not the effects that you’re talking about are there, I don’t see it."

Rather was not having the double standard.

"Just a thought," Rather tweeted on Christmas Day, "which should be considered more 'marginal' - believing in Santa at age 7 or not believing in climate change at age 72?"

Rather went for the jugular and Twitter loved it.

@DanRather @IanHartley_ ... or believing in a supreme being who lives in the clouds who determines everything and h… https://t.co/tAs8t7DZSU
— Citizen White Rock (@Citizen White Rock) 1545797336.0

As some pointed out, kids believing in Santa is "marginal" and they generally outgrow it, because there is no evidence supporting Santa's existence.

@DanRather @IanHartley_ ... or believing in a supreme being who lives in the clouds who determines everything and h… https://t.co/tAs8t7DZSU
— Citizen White Rock (@Citizen White Rock) 1545797336.0

@DanRather You could add “or continuing to advocate for abortion when science and reason long ago told us we’re kil… https://t.co/FEVIcg5ZTs
— Ryan Speicher (@Ryan Speicher) 1545848848.0

Climate change, on the other hand, is backed by decades of data, experiment, and observation, and humanity is running out of time to act.

@DanRather @KevinMcCallum You don't have to believe in climate change it's something to know because proven by fact… https://t.co/KI7fxcyQfW
— Gert Basson (@Gert Basson) 1545799910.0

@DanRather @MargaretSheftic And believing all is right with the world while it's crumbling around him.....I mean us
— Minister Frank (@Minister Frank) 1545799819.0

@DanRather How about believing in climate change yet doing everything possible to make it worse, like our ruling… https://t.co/oH2ZWBCxrl
— Bill Kennedy (@Bill Kennedy) 1545806729.0

Trump's and the Republican Party's baseless denial is irresponsible and imperils us all. All they have to do is pay attention.