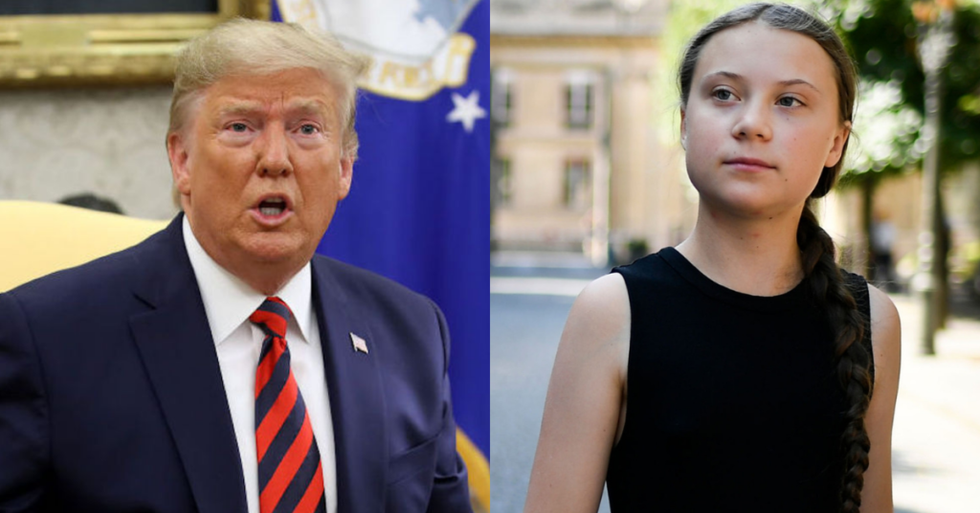 On Monday, in a late-night tweet, President Donald Trump decided to similarly weigh in on Thunberg. In an example of the cyber bullying First Lady Melania Trump's Be Best campaign is supposed to address, the 73 year-old President of the United States shared video of an impassioned speech Thunberg delivered at the U.N. calling out world leaders' inaction on the climate with the caption:

"She seems like a very happy young girl looking forward to a bright and wonderful future. So nice to see!"

Alone it sounds like a nice sentiment, but paired with the video of a visibly upset Thunberg the intent to mock is clear.

But it was Greta herself who got the last laugh with a subtle dig at the President's tweet contained in her updated Twitter bio:

"A very happy young girl looking forward to a bright and wonderful future."

And people were so here for it.

As for Trump's initial attempt at humor, the Good God Above thought Trump should look in a mirror before criticizing others' attitudes.

While others commented on the lowered expectations Trump instilled for the POTUS.

Others asked why so many adult men are so upset about Greta Thunberg.

Some thought petty jealousy might be a factor for at least one older man attacking Thunberg.

@realDonaldTrump And she's gonna win a Nobel Prize. Unlike elections and Republicans, those can't be bought.
— John Pavlovitz (@John Pavlovitz) 1569321941.0

@realDonaldTrump While you mock her, she's drawing far bigger crowds than you could ever hope to. #BeBest
— Arlo Walker (@Arlo Walker) 1569311637.0

Many had responses directed at the President.

The President was not the only Trump to face backlash over conservative cyberbullying of Thunberg.

The FLOTUS' pet project made many of the mentions of her husband mocking Thunberg.

The sitting President of the United States is gleefully cyber-bullying a 16 year-old girl with aspergers because sh… https://t.co/6CcL9ZawJc
— Translate Trump (@Translate Trump) 1569324583.0

Unlike many of the adults attacking her, Thunberg has handled their insults and false accusations with grace.

When haters go after your looks and differences, it means they have nowhere left to go. And then you know you’re wi… https://t.co/0LHxi6ZUa4
— Greta Thunberg (@Greta Thunberg) 1567287890.0

Before I started school striking I had no energy, no friends and I didn’t speak to anyone. I just sat alone at home… https://t.co/6yxkDTTQmf
— Greta Thunberg (@Greta Thunberg) 1567288073.0

The President nor First Lady has responded to the backlash created by Trump's Twitter attack on Thunberg.

Show your support for Thunberg and other young climate activists with this shirt available here.