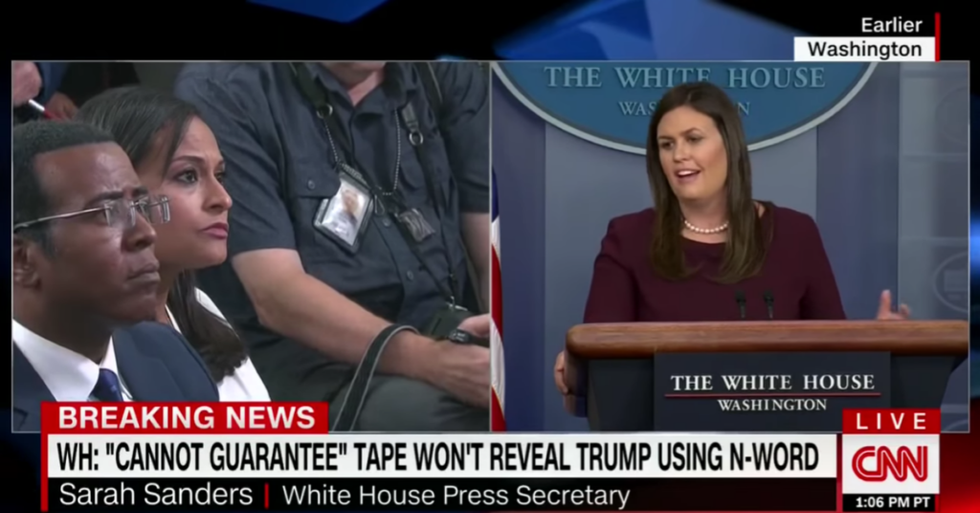 Several anchors at CNN—a favored target of President Donald Trump in his attacks on the media—found themselves wondering at the response of White House Press Secretary Sarah Huckabee Sanders to questions about her boss during Tuesday's press briefing. When asked to guarantee no Trump n-word tapes would surface, Sanders would not.

But Trump stated on Twitter Monday night, the n-word never passed his lips in the entirety of his life as it is not in his vocabulary.

I don’t have that word in my vocabulary, and never have."

.@MarkBurnettTV called to say that there are NO TAPES of the Apprentice where I used such a terrible and disgusting… https://t.co/qH7J8U3RCF
— Donald J. Trump (@Donald J. Trump) 1534211405.0

As her boss leaves no doubt to the possibility of any tape ever surfacing, CNN host Jake Tapper on The Lead and Anderson Cooper on Anderson Cooper 360 both asked why Sanders could not guarantee no tape will someday surface.

During the White House press briefing Tuesday, NBC's Kristen Welker asks Trump's press secretary if she asked the President about the possibility of tapes or if he said the n-word. Each time, Sanders demurred stating since the President already addressed the question on Twitter, it made her asking him unnecessary.

That adherence to her standard response—'the President already addressed that'—matched prior press briefings as a review on Anderson Cooper 360 showed. But then Sanders went off script for Welker's final question.

Can you stand at the podium and guarantee the American people they’ll never hear Donald Trump utter the ‘N-word’ on a recording, in any context?"

This time, Sanders offered two disclaimers in her responses.

Welker noticed and followed up with, "Just to be clear, you can't guarantee it?"

To which Sanders responded:

Look, I haven’t been in every single room."

Sanders then repeated her usual standard response of 'the President already addressed that.'

I mean, that's pretty stunning. First of all, I'm not sure why today of all days she decided that lying was something she wasn’t willing to do so kudos to her for the truth on that.

The President’s tweet seems pretty definitive, at least definitive enough for his press secretary to give it the kind of definitive statement like these she’s repeated for past presidential tweets."

Cooper then played a number of clips where Sanders took a response by Trump as the final word on a matter and proof positive. So why not this time?

Why then add the statement, 'Look, I haven't been in every single room'? Does Sanders know or at least think a tape exists?

Or is Sanders finally engaging in some self-preservation?

The White House Press Secretary routinely receives heavy criticism for false statements made behind the podium in the White House briefing room. And maybe unfairly as she did not create the lie, she only repeats it.

But pundits and the public alike point out each time she repeats the claims of her boss or another member of the Trump administration only to have those claims backtracked or contradicted by the President, Rudy Giuliani or the truth made public.

Sanders famously once said, in a response to why she repeated an easily debunked lie, that she only gave the best information she had at the time. Has even she grown wearing of such excuses or the consequences of making repeated false statements publicly like being asked to leave a restaurant?

Is this Sanders turning over a new leaf in general—only guaranteeing claims she personally knows are true—or is this only because of the subject of the discussion—racism and the use of the n-word by a powerful White man.

Racism often holds the position in the United States as the elephant in the room. Everyone sees it, but no one wants to discuss it or even acknowledge it.

Only Sarah Huckabee Sanders knows for certain why she chose to give herself wiggle room on Trump's use of the n-word. As for the fallout for her less than ringing endorsement of her boss, that remains to be seen as well.