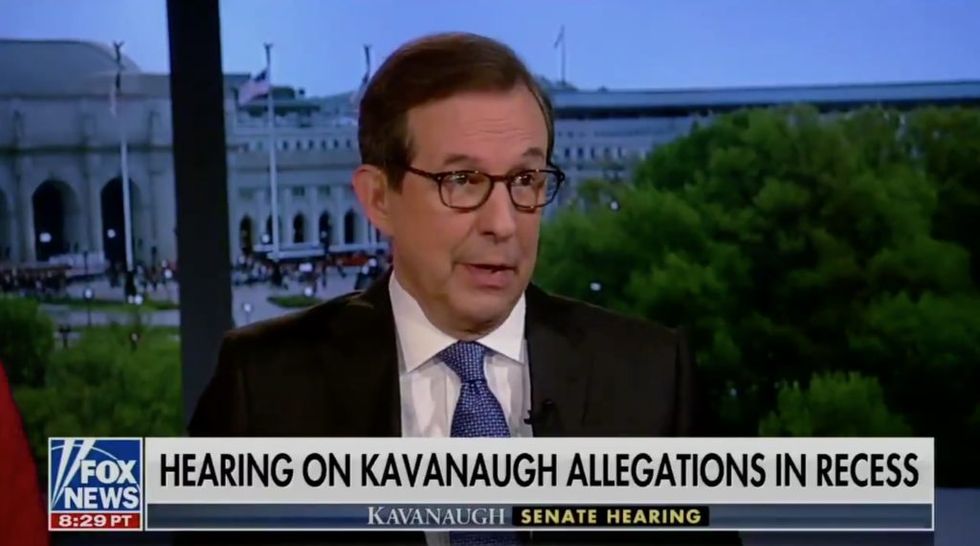 After being thrust upon the national stage having coming forward with sexual assault allegations against Supreme Court nominee Brett Kavanaugh, Dr. Christine Blasey Ford testified against the nominee in a highly-anticipated Senate Judiciary Committee hearing today.

To many, Ford was as collected as could be under the circumstances, sincere, and ultimately credible. So much so that Fox News host Chris Wallace praised Ford's testimony, saying:

"This was extremely emotional, extremely raw and extremely credible."

"Nobody could have listened to her deliver those words and talk about the assault and the impact it has had on her life and not have your heart go out to her. She obviously was traumatized by an event."

"This is a disaster for the Republicans."

Wallace also mentioned that his two daughters confided in him about things that happened to them in high school. He asserted that teenage girls often feel compelled to keep silent about events like this.

Fox News' CHRIS WALLACE says in wake of Kavanaugh allegations "two of my daughters have told me stories that I have… https://t.co/JmlVZluEyY
— Aaron Rupar (@Aaron Rupar) 1538056617.0

The statement comes just a day after President Donald Trump dismissed the allegations as a "big fat con," while simultaneously praising Fox News' coverage in an unhinged press conference at the United Nations General Assembly.

The president was reportedly on a flight back to Washington as Wallace made the statements.

Many began to imagine if Trump would be singing a different tune following this coverage.

@samstein Sarah Sanders says he is watching. And there are also reports that he is furious about what he is seeing,… https://t.co/0IToMFgbeB
— CatteNappe (@CatteNappe) 1538069371.0

Fox is famously Trump's favorite network, speculated by many to be because of its conservative leanings and its willingness to mislead its viewers.

Twitter took notice that Wallace made the assertions on the infamously conservative network.

Kavaugh is set to testify later today, but due to his interview with Fox News earlier this week to deny the allegations, it was Ford under the most pressure to convince the American public. The odds were stacked against her but according to many, she came through.

I have witnessed well over 500 witnesses testify in court and in deposition over the course of my career. There is… https://t.co/4wHAoqcycT
— Michael Avenatti (@Michael Avenatti) 1538062910.0

It's unclear at this moment whether or not Fox News will remain objective (by its standards) on the testimony, or if Kavanaugh's statements later today will be enough to convince them. Regardless, Wallace's words and his empathetic connection of the testimony to the statements of his daughters is certainly doesn't do Kavanaugh's status as the nominee any favors.