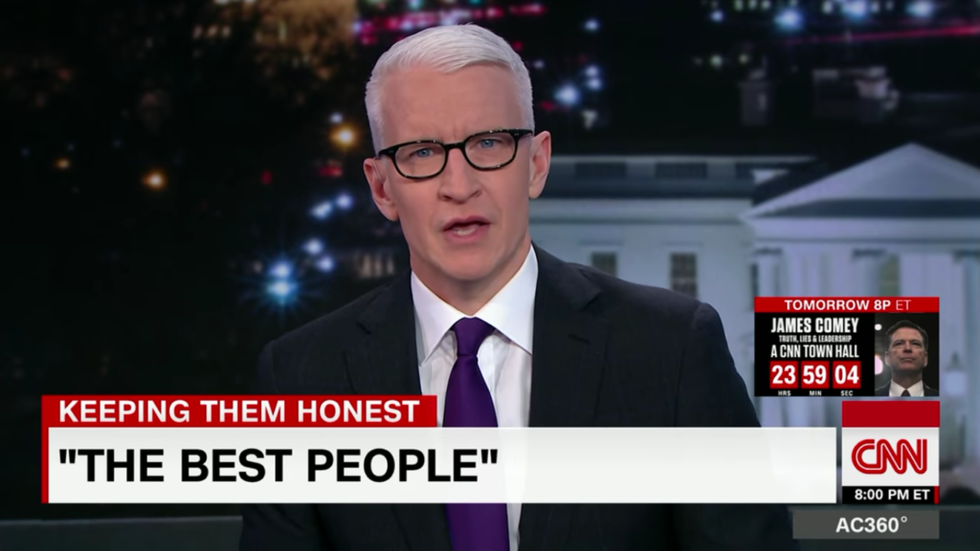 During his 2016 presidential campaign, President Donald Trump stated his lack of political experience did not matter because he would get the best people for his administration. On his self-titled CNN program Tuesday, Anderson Cooper questioned that pledge.

If the president hires only the best people, why aren’t they still on the job? Why have so many left the administration? Why are others serving under ethical clouds? Why are some facing so much difficulty getting confirmed?”

The Trump administration spent their first year struggling to fill vacancies and having filled vacancies mired by scandals, leading to some officials being fired or resigning. From presidential advisers resigning over problems with security clearances because of domestic abuse to cabinet members resigning due to questions of financial impropriety, the troubles finding the right people for the job are evident.

"The supposedly best people have been hired and fired at a brutal clip,” the host said on Anderson Cooper 360.

Rarely has the phrase ‘serving at the pleasure of the president’ been taken quite so literally.”

An analyses of the first 14 months of first term presidential administrations, focused on 21 top White House and cabinet positions, from President Bill Clinton to Trump, shows how unusual Trump's staffing issues are. Nine of the 21 positions have turned over at least one time during the Trump presidency versus only three times under Clinton administration, twice under President Barack Obama and only once under President George W. Bush.

The latest such problem involves the president's selection to head the Department of Veterans Affairs. Doctor Ronny Jackson provided a glowing bill of health for Trump for his annual physical and now he's the president's latest nominee for a spot in his administration.

But the doctor is facing numerous allegations of improper conduct on and off the job. And like most Trump nominees, he has no prior experience to help him in leading an agency the size of the VA.

For now, Jackson's confirmation hearings are on hold while all the allegations against him are investigated.

A record number of turnovers in the Trump administration leave many questioning the president's best people claims. More than three dozen high-level officials were fired or resigned, including Secretary of State Rex Tillerson.

Tom Price, Trump's Secretary of Health and Human Services, resigned after news of his excessive travel bills became public knowledge. He is only one of the Trump appointed and confirmed cabinet members cited for excessive spending.

Some positions within Trump's administration are more volatile than others. There have been four different White House communications directors, some lasting less than a week (Anthony Scaramucci) to more than six months (Hope Hicks). Sean Spicer held the position on two separate occasions. At present the position remains unfilled, awaiting a fifth person to hold the title.

In addition to questions regarding improper use of government funds, Trump's cabinet members face harsh criticism regarding their fitness for the jobs they were given. Most have no prior experience. Many, like Environmental Protection Agency head Scott Pruitt and Education Secretary Betsy DeVos have histories of speaking about dismantling the agencies now under their supervision.

Cooper is not the first person to question Trump's campaign promise to staff his administration with only the best people. Like many of his other quotes, his words or Tweets came back to haunt him on Twitter.