Mitch McConnell Just Got A Major Challenger for His Race in 2020, and Her Launch Video Will Give You All the Feels 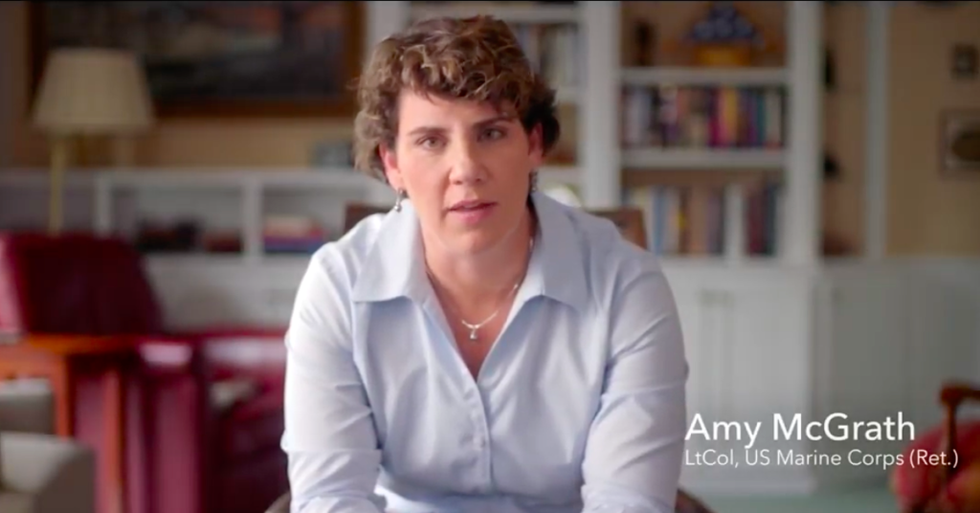 Amy McGrath attained the rank of Lieutenant Colonel in the United States Marine Corps after the Kentucky native became the first female pilot to fly the F/A-18 on a combat mission. Now the woman who flew on over 85 combat missions takes on a new challenge: defeating Mitch McConnell in the 2020 election.

McGrath announced her candidacy with a campaign ad that is garnering attention in her home state and nationwide. In it, the decorated Marine begins by calling out McConnell for not responding to the letters of his constituents, including one a 13 year-old McGrath wrote.

"I’m running to replace Mitch McConnell in the U.S. Senate. Everything that’s wrong with Washington had to start somewhere—it started with him."

"With your help, we can defeat Mitch and defend democracy. Join us: AmyMcGrath"

Her tweet echoed one message in her campaign ad, where McGrath stated:

"Everything that's wrong in Washington had to start someplace. How did it come to this? That even within our own families we can't talk about the leaders of our country anymore without anger and blame."

Over a photo of a younger McConnell, McGrath said:

"Well, it started with this man who was elected a lifetime ago. And who has bit by bit, year by year, turned Washington into something we all despise. Where dysfunction and chaos are political weapons. Where budgets and health care and the Supreme Court are held hostage."

"A place where ideals go to die."

"I'm running for Senate because it shouldn't be like this."

People agreed with McGrath's assessment of Senate Majority Leader McConnell—who has been in the Senate since 1985 or 34 of his 77 years. In the past, McConnell boasted of his obstructionism and continues to thwart legislation in his role in the Senate.

@DemWrite @AmyMcGrathKY I just contributed to Amy McGrath for Senate. I know Amy McGrath. I maxed out on her House… https://t.co/glIJhlvZCF
— Gerald Weaver (@Gerald Weaver) 1562678505.0

@AmyMcGrathKY Democrats taking back Senate majority is the other part of this fight. @swingleft has picked 8 incumb… https://t.co/JAQ6HmMbH0
— Adam Best (@Adam Best) 1562680320.0

People were on board with McGrath's campaign.

@AmyMcGrathKY If this campaign launch video is any indication of how you’ll be running your campaign, Mitch McConne… https://t.co/yLP03SGrl9
— Jon Cooper 🇺🇸 (@Jon Cooper 🇺🇸) 1562673547.0

Some pointed out how McConnell plans to retain his seat with help from President Donald Trump's Secretary of Transportation, Elaine Chao who also happens to be McConnell's wife.

@AmyMcGrathKY @BrienneOfSnark_ Never ever forget...No one in Washington has been dirtier, longer, than Elaine Chao… https://t.co/ApKKicqWiZ
— eva maria (@eva maria) 1562671039.0

The 2020 election is now 482 days away. While in the 2018 midterms, the Democrats had far more of their Senate seats up for reelection, in 2020 the Republicans have to defend 22 seats in the Senate.

In that 2018 midterm, McGrath was narrowly defeated by incumbent Kentucky Republican Representative Andy Barr who retained his seat in the House with just 51 percent of the vote in deep red Kentucky.

McGrath is one of several women featured in the book Band of Sisters: American Women at War in Iraq, available here.

"Band of Sisters presents a dozen groundbreaking and often heart-wrenching stories of American women in combat in Iraq, such as the U.S.'s first female pilot to be shot down and survive, the military's first black female pilot in combat, a young turret gunner defending convoys, and a nurse struggling to save lives, including her own."

You can show your support for McGrath with this shirt, available here, sold by Kentucky Democrats to Ditch Mitch.