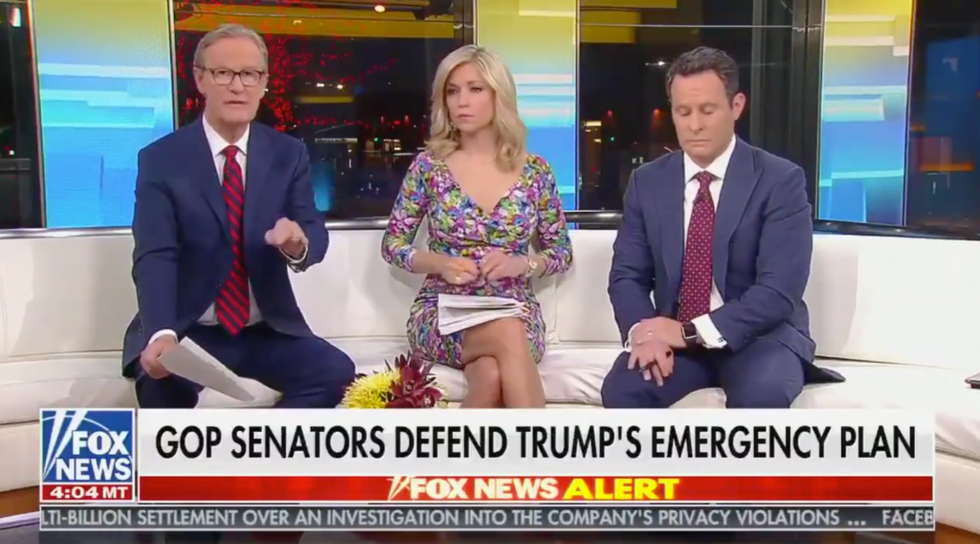 The hosts of Fox and Friends were hard at work defending President Donald Trump's controversial intention to declare a national state of emergency at the southern border, citing an illegal immigration crisis.

“This is one of the reasons people went to the polls to vote for him – for that wall, and if you ask Republicans who support him and support the wall, they say it’s common sense.”

So, by Earhardt's logic, the majority of Americans voted against the wall.

People on Twitter were quick to point this out.

@revrrlewis @mmfa Someone should tell her that the US is not a dictatorship. The President should represent the peo… https://t.co/vjzXxkCvGx
— Rudy (@Rudy) 1550239214.0

@revrrlewis @mmfa I fully expect that based on this precedent she will say the imposition of single payer health ca… https://t.co/KW6iyrzGcp
— Stevo Orestis (@Stevo Orestis) 1550233364.0

@revrrlewis @mmfa He LOST the popular vote by more then 3 million votes. Stop saying people went to the polls and he has a mandate.
— Andrew Stevens (@Andrew Stevens) 1550240357.0

The hosts weren't spared either.

Americans lampooned the willingness of hosts Ainsley Earhardt, Steve Doocy and Brian Kilmeade for constantly misrepresenting reality at the expense of millions of Americans.

At least they have the President's approval.