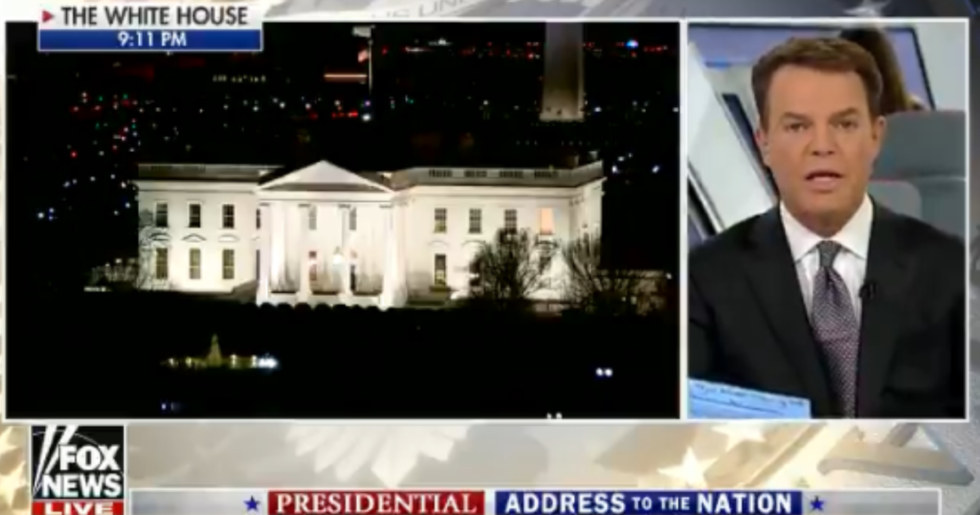 Trump, desperate to have his campaign promise of a border wall with Mexico come to fruition, went on a gloomy ten-minute rant riddled with falsehoods, which Shepard Smith of Fox News fact-checked in real time.

A reality check from Shepard Smith on some of the numerous pieces of inaccurate information in @realDonaldTrump’s s… https://t.co/pzDoYVZDoq
— Ann McLane Kuster (@Ann McLane Kuster) 1547004873.0

First, Smith shredded Trump's false claims that undocumented immigrants have been responsible for tens of thousands of murders.

“Statistics show that there is less violent crime by the undocumented immigrant population than by the general population," Smith said. This is true.

Next, in his latest pitch for a border wall, over which Trump shut down the government on December 22, the president said drugs such as "meth, heroin, and cocaine" are pouring over the southern border between ports of entry.

Smith corrected Trump citing “government statistics" which "show much of the heroin actually comes not over the unguarded border but through ports of call," meaning places of legal entry into the United States.

Despite what Trump says, illegal border crossings have decreased over the last decade, Smith added. “There is more outward traffic than inward traffic," Smith said.

And then came the crux of this whole shutdown mess: funding for a border wall. Trump has demanded roughly $5 billion for a wall or barrier made of steel slats, which House Democrats have declared a non-starter.

This is, of course, the opposite of what Trump promised during the campaign; Mexico, he insisted, would pay for the wall. Now, the president boasted, Mexico will indirectly pay for the wall through the latest trade deal struck between the U.S., Mexico, and Canada.

“As for the trade deal he mentioned with Mexico, which he said would pay for the wall,” Smith continued, “that trade deal is not yet complete.”

Last month, Trump said he would be "proud to shut down the government for border security," and as Smith correctly pointed out, it was Trump "himself who said he would own the shutdown.”

Trump also lied when he said law enforcement was requesting funding for a border wall.

The fact that Fox News held truth to power made a lot of people happy.

@thedailybeast Thanks @ShepNewsTeam You are an encouraging voice in a polluted sea....better known as @FoxNews
— Rock-it (@Rock-it) 1547004782.0

Could the right-wing media tide be turning on Trump? That remains to be seen.

Oh, and in case you missed it, Trump's reelection campaign sent out a fundraising email shortly before his Oval Office Address, proving once again that Trump is all about the show and siphoning attention from matters of actual importance - like the humanitarian crisis his administration has manufactured at the southern border.

In case you thought @realdonaldtrump's border security address tonight has nothing to do with his 2020 re-election,… https://t.co/TaCos48zSR
— Dave Levinthal (@Dave Levinthal) 1546977212.0

This is not normal.