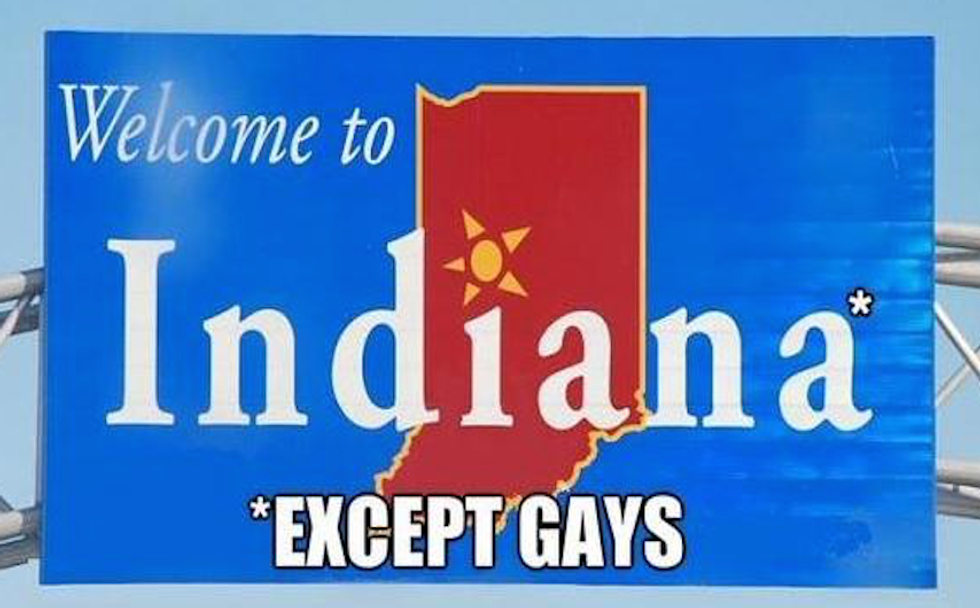 In “an attempt to balance civil rights and religious liberty,” Indiana lawmakers have moved to amend Indiana’s Code concerning civil rights. Many argue, however, that the bill provides little meaningful protection for LGBT people, and may result in further discrimination.

On its face, the bill—known as Senate Bill 100—promises to extend the state’s civil rights to forbid discrimination based on sexual orientation and gender identity. In theory, this would mean that LGBT people are protected from discrimination in housing, employment and public accommodations.

However, its detractors argue that the number of exemptions and carve-outs would leave the LGBT community worse off than if the bill does not pass.

The provisions related to the use of restrooms is perhaps most evocative of the mid-20th century discriminatory practice of “separate but equal” accommodations. Under the bill, “It is not a discriminatory practice or unlawful separation or segregation” to maintain separate restrooms or locker rooms for LGBT people, or to enforce rules and policies concerning their use. (The law does not, however, require the building to build new facilities or renovate or alter existing facilities.)

It is also not considered discriminatory to “establish, use, and enforce dress code rules and policies” based on sex, sexual orientation, or gender identity. As one commentator noted, this “means that if an employee is trans, and, let’s say, has a full beard, chest hair, and

no breasts, it is ‘not a discriminatory practice’ to make him wear a dress and high heels, because at my for-profit business, that’s how I say things should be.”

Additionally, the bill explicitly exempts employers with fewer than four employees from the law, effectively allowing small business owners to discriminate with impunity.

The bill is also causing concern because it preempts cities and towns from enacting any anti-discrimination ordinances that are “more stringent” than the protections laid out in the bill. This would remove protections already in place for LGBT people in 17 cities and towns that have passed protections on the basis of sexual orientation and gender identity, and would forbid any future protections. So, for example, even if a more liberal town wanted to prohibit small business owners from openly refusing service to a lesbian, it could not.

In the face of opposition to Senate Bill 100, another bill was introduced this month, Senate Bill 334, which would ban discrimination based on sexual orientation, but not gender identity – removing protections for transgendered people until transgender protections could be “further studied.”

Republican Senator Travis Holdman, who introduced the bill, called it “sort of a compromise piece.” “Folks understand the gay issue, the lesbian issue, the

bisexual issue,” he said. “The transgender piece is different enough. ... The whole psychology of that is just different enough. It takes away some of the angst folks were having, because folks don’t understand the issue.”

Reaction was quick from LGBT activists, who called the bill “a non-starter.” “We are for full protections for all LGBT people, said Chris Paulsen of Freedom Indiana, which advocates for gay and transgender rights.

Although both bills have been introduced to the Senate, it is unclear when they will be taken up. The House, in particular, does not seem eager to step into the debate. “I just don’t think [LGBT protection] was a priority for legislative leaders,” said Republican House Speaker Brian Bosma, after unveiling the legislative agenda for House Republicans in 2016.

In the meantime, said Freedom Indiana, “The more lawmakers try to dance around the need for real, clear LGBT protections, the more it looks like they want a way to maintain the status quo: a state where you can be fired, denied housing or turned away from public places because of who you are or whom you love.”