Don Jr. Got a Retroactive Permit from Mongolian Officials After Killing a Near-Endangered Sheep on a Recent Hunting Trip

Junior insists that Burisma Holdings, the energy company on which Hunter Biden is a board member, traded the board position for influence in the White House, giving Hunter Biden special treatment because of his last name.

According to a report from ProPublica's Jake Pearson Anand Tumurtogoo, Don Jr. shot and killed an argali sheep in Western Mongolia during a hunting trip this past summer.

The argali are the largest sheep in the world with majestic curved horns that sometimes grow to six feet in length. The species is considered threatened under the Endangered Species Act, and permits to hunt sheep in the region are extremely rare and little is known about the process, other than it's usually issued to those with money and connections. According to ProPublica, only three permits have been issued in the region.

Being granted that permit retroactively is even rarer.

That seems to be what happened in Don Jr.'s case however, with officials granting his permit on September 2, after he'd left the region. Notably, Junior met with Mongolia's president while on the trip, though it isn't known what they discussed.

While no pictures of Trump Jr. with the animal's body were posted, a Republican donor reportedly accompanying Trump on the Trip, Kevin Small, was pictured with an argali carcass around the same time. 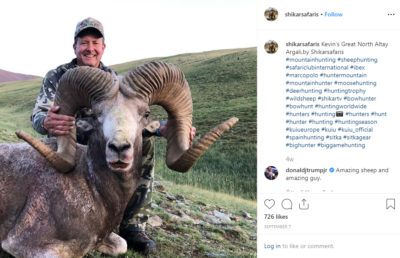 Don Jr. are often criticized for their hobby of big game hunting, and this time was no different.

Who could have ever guessed that the son of a vicious, vindictive, malignant narcissist and wannabe gangster would… https://t.co/TKv4IsNhmL
— Eric Jones (@Eric Jones) 1576104398.0

Trump Jr.'s frequent claims that Hunter Biden got special treatment because of his last name didn't help his case either.

"What are the chances the Mongolian government would've done any of that to someone who wasn't the son of the Unite… https://t.co/ALgUwwKlt8
— ItzLisa (@ItzLisa) 1576087396.0

The Trump administration has taken significant steps to weaken the Endangered Species Act.