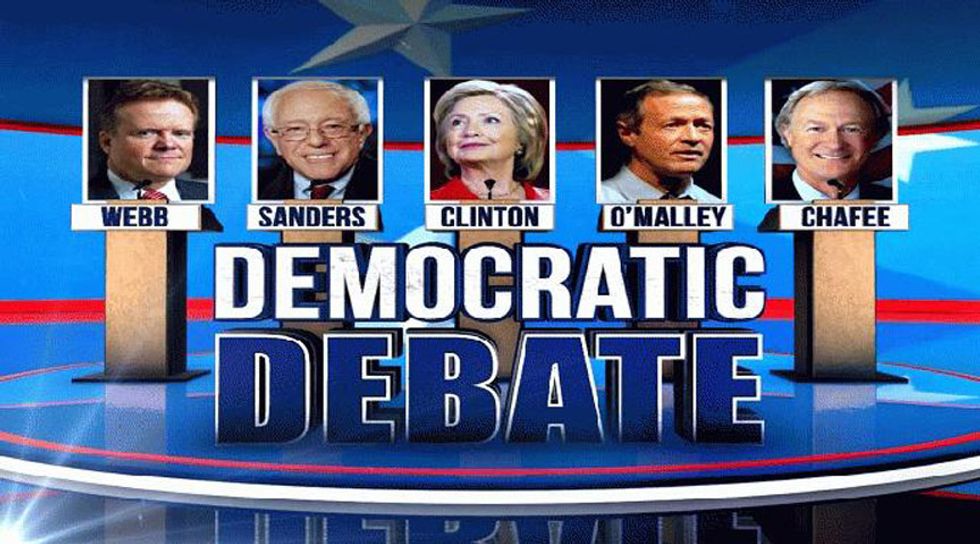 If you missed the first Democratic Presidential Debate, here are the evening’s highlights:

CNN opened the debate with a video message from President Barack Obama in which the President urged Democrats to come together and get out to vote; he also listed some of his administration’s greatest accomplishments, as a few images of Vice President Joe Biden briefly appeared on screen. The choice to acknowledge “the candidate who wasn’t there” might have been a nod to Democrats who had hoped the Vice President might participate in the debate; the move also, however, could end up adding fuel to the “will he or won’t he” speculation. Ultimately, Vice President Biden only has a few more weeks to make his decision as November filing deadlines are swiftly approaching.

Out of the Gate

From Right to Left

The five candidates revealed early on where they stood on the political spectrum. Webb, for instance, discussed his views on affirmative action and limiting diversity programs. In the process, he proved just how tone-deaf he really is with regard to race. Also, Anderson Cooper called out Chafee for actually having been a Republican not that long ago. Chafee responded by arguing that though his party affiliation had changed, he’d been “a block of granite when it comes to the issues.” Hillary Clinton focused on the fact that she holds a “range of views” that she says are “rooted in values and experience.” When asked if she was

a centrist or a progressive, she said “I’m a progressive, but I’m a progressive who likes to get things done,” implying that she might be the most able to work with a Republican Congress while holding true to essential progressive ideals. If Martin O’Malley stood out for anything, it was that his political views are somewhere between Centrism and Socialism—Sanders, on the other hand, stood firm and explained his “democratic socialism.” When Anderson Cooper pointed out that “the Republican attack ad writes itself,” Sanders explained that Democrats win when lots of people vote and that excitement brings people to the polls; Sanders also pointed out that he is already drumming up plenty of excitement within the party.

The take away, though, was the Clinton-Sanders battle of values: Sanders worked hard to sell socialist ideals, while Clinton called for a more moderate hope to “reign in” capitalism’s excesses.

Despite CNN’s best attempts to make the debate a mud-slinging contest, the Democratic candidates for President focused most of their attention on the issues:

Syria and the Gods of War

For the first time in the debate, Clinton distanced herself from the Obama administration, saying that she would take a tougher stance with Russian President Vladimir Putin over his involvement in the Syrian crisis. Sanders and O’Malley immediately took the opportunity to criticize Clinton for calling for a no-fly-zone over Syria. Clinton fired back, though, thanking O’Malley for having endorsed her for President in 2008.

Anderson Cooper attempted to stir up a kerfuffle between Jim Webb and Bernie Sanders over the War in Vietnam, pointing out that Webb had served in combat and Sanders had been a conscientious objector. The candidates didn’t take the bait—instead, Sanders spoke of his respect for Webb’s military service; Webb, in turn, expressed that he did not have a problem with individuals who, based on their principles, went through the proper legal process to avoid serving in Vietnam.

Anderson Cooper, it seemed, couldn’t resist bringing up Clinton’s e-mail scandal. Clinton acknowledged that having a private e-mail server when she was Secretary of State was a mistake. She was also quick to point out the scandal had been used as a primarily partisan attack. But when Cooper pressed her, pointing out that even President Obama had suggested that the scandal was worthy of discussion in an interview with 60 Minutes on Sunday, Bernie Sanders came to Hillary’s defense. With one of the best quips of the night, Sanders chimed in saying “the American people are sick and tired of hearing about [Clinton’s] damn e-mails.” Lincoln Chafee did not agree—arguing that the scandal represents an issue of American credibility abroad. When asked if she wanted to respond, Clinton’s one word reply, “no,” won her a round of applause.

A video question posed by a law student led to a discussion of the Black Lives Matter movement and the state of race relations in America. Sanders answered first, arguing that we must “combat institutional racism” and fix our broken criminal justice system. O’Malley echoed Sanders, agreeing that we have undervalued black lives in our country and that a lot of work needed to be done. Clinton chimed in next, pointing out that President Obama has been “a great moral leader on these issues.” She also discussed the need for criminal justice

reform, tackling mass incarceration and instituting early childhood education. Finally, rather than discussing the issues in broad terms, Webb focused on his experience with criminal justice reform in Virginia.

The 1% vs the Middle Class

When the debate shifted to a discussion about the struggling middle class, the two heavyweights in the debate clearly overshadowed their three lesser-known competitors. Sanders began by promising to rebuild America’s infrastructure and to raise the minimum wage. He also discussed the need to promote equality for female workers and his plan to make college tuition free. When Clinton was criticized for being a member of the 1%, she did not shy away from acknowledging her advantages, but also pointed out her hopes for all Americans to reach their full potential; Clinton brought up her five point economic plan as a means of reaching that goal.

It was at this point that Lincoln Chafee had his lowest moment of the night—when asked about his vote to repeal Glass-Steagall, a Depression-era law that prevented commercial banks from engaging in speculative activates, Chafee remonstrated with a laundry list of excuses for his vote. For instance, he said that it had been his first vote in Congress and that he had been grieving his father’s death at the time. The audience’s reaction wasn’t positive, and it’s not surprising—after all, the President of the United States can’t make excuses for poor decisions.

Next, the candidates were confronted with a series of questions about immigration and whether to offer tuition assistance and healthcare to individuals who are in the country illegally. Hillary Clinton dominated this part of the debate. Clinton expressed that immigrants should have access to health care benefits, although she stopped short of saying that they should receive the same Obamacare subsidies as citizens. She also argued that whether to provide in-state tuition to undocumented workers should be an issue for each state to decide.

Not Just More of the Same

Each of the candidates was asked to give a rapid-fire explanation of how their approach to the Presidency would differ from that of President Obama. Their answers, again, showed the diversity of their views.

All in all, it was a very civil debate and a surprising number of substantive issues were discussed in broad terms. Clinton and Sanders proved why they are at the head of the pack; Chafee and Webb, on the other hand, failed to inspire. Chafee, for instance, made excuses rather than accepting responsibility for his early political blunders. And Webb? Webb spent most of his time whining about how he didn’t have enough time to speak. As for O’Malley, he made some good points, but ultimately missed his chance to define himself as the clear middle ground candidate between Capitalist Clinton and Socialist Sanders.