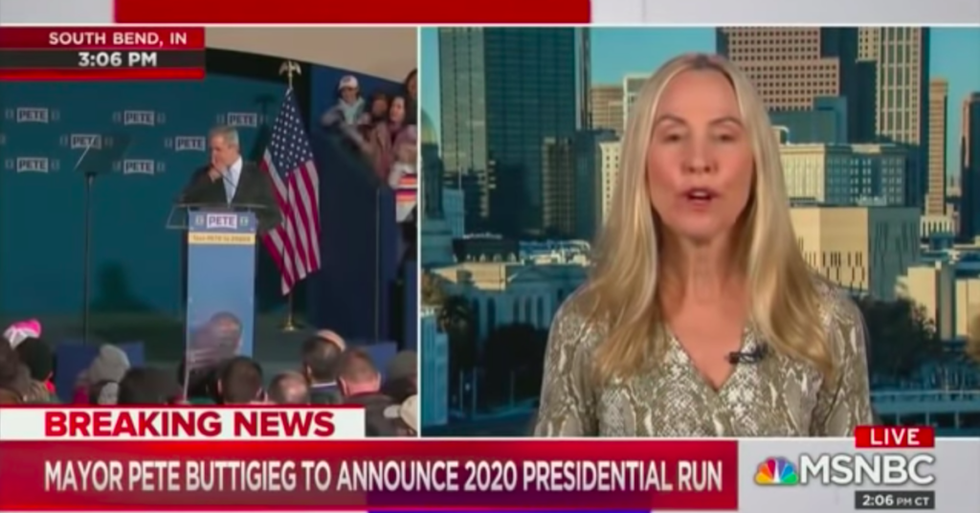 On Sunday as MSNBC contributors commented on South Bend, Indiana Mayor Pete Buttigieg's announcement of his official entry into the 2020 presidential campaign, each commentator expressed a different view. Some felt Buttigieg was too young while others thought his age was a positive compared to other candidates.

But one guest, conservative radio host Chandelle Summer had a unique take on Buttigieg's candidacy. She thought the diversity that Buttigieg brings to the presidential race would be a benefit to President Donald Trump's chance for reelection.

"He will be the first Maltese-American and Episcopalian gay, millennial war veteran ever to have reached for the presidency."

"He is so far from the norm when it comes to political candidates that I think that voters will flock in droves to Donald Trump as a candidate just because they will find this so unusual and frightening."

While fear of diversity is something conservatives are often accused of, rarely do they openly admit it on a live broadcast.

After some banter back and forth, Sirius XM host Danielle Moodie-Mills of Woke AF stated:

@cookie_grrrl @RawStory Yes. And the Christian Left, which Pete represents, is a huge threat to their own religious… https://t.co/QKokiNbS7Q
— Beckzilla (@Beckzilla) 1555324817.0

Summer then attempted to walk back her remarks. She clarified that it was not her personal opinion that Buttigieg was "unusual" and "frightening."

Rather, that was her evaluation of the character of voters in the United States.

"I don’t think it’s personally terrifying. I think that the American public will find it so abhorrent and different from the usual candidates and won’t be able to wrap their heads around it."

Summer then tried to claim it was not because of the reasons she originally listed that voters would find Buttigieg unusual, frightening, abhorrent and different. In her revised remarks, it was all about Buttigieg's age.

"The age is a huge problem. I mean, he is 37 years old. I can remember when I was 37 years old and my thought process, the way I analyze things is different than now and you need experience in life to be a good leader and to understand all the different dynamics of the economy, the world, the global situation, national security."

"I just don’t think voters will trust someone that young and I don’t think the fact that he’s gay is a big problem personally. I feel like we have crossed that bridge in this country."

People were not buying Summer's revised reasons however.

People got the message loud and clear despite Summer's attempts to backtrack. Many pointed to Summer's own credentials and relevancy to comment on a national story.

@RawStory Part-timers on small-market talk radio are the bottom of the barrel of right-wing nutjobbery.
— StevyB (@StevyB) 1555278932.0

@RawStory If this is the best conservatives can come up with, they are in serious trouble and definitely feel threatened by Mayor Pete
— Richyritsch (@Richyritsch) 1555294698.0

And one commenter offered an alternate reason why conservatives should fear Pete Buttigieg's decision to run for President in 2020:

@RawStory Untrue. So called conservatives are scared to death of Pete Buttigieg as he is can counter their usual ta… https://t.co/0KtF82BEoi
— Barry J Kurtz (@Barry J Kurtz) 1555276704.0

Mayor Pete Buttigieg made his intention to run for President in 2020 known in a press conference on Sunday. If you want to learn more about Buttigieg, his book Shortest Way Home: One Mayor's Challenge and a Model for America's Future is available here.