Trump Takes Most Extreme Stance To Date on Muslims 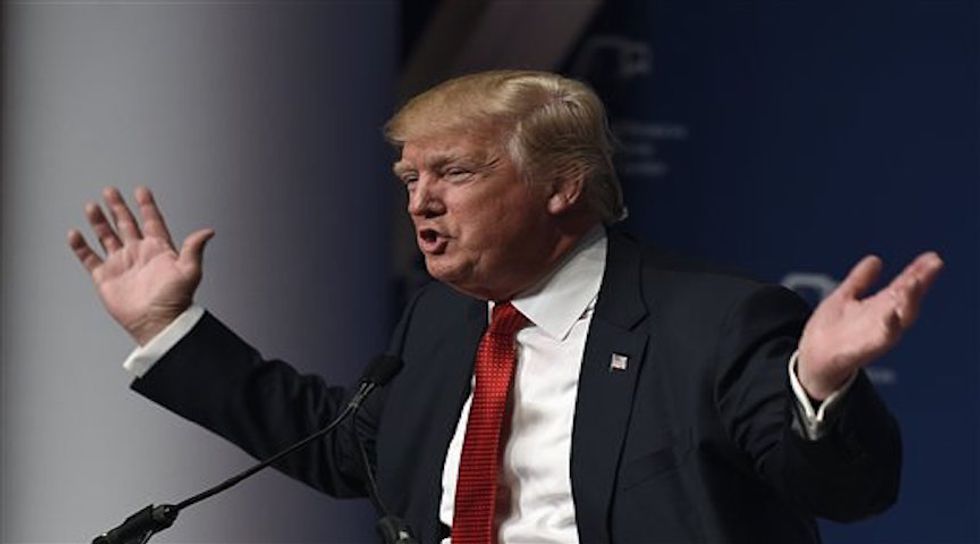 In what is likely Presidential candidate Donald Trump’s most incendiary statement to date, Trump called for a “total and complete shutdown of Muslims entering the United States until our country’s representatives can figure out what is going on.”

Trump cited support for his position, aired in a December 7th campaign press release, from unnamed Pew Research data and a poll from the Center for Security Policy, an organization run by anti-Muslim extremist Frank Gaffney. But Trump urged Americans to look beyond the questionable poll itself, playing to generalizations: “Without looking at the various polling data, it is obvious to anybody the hatred is beyond comprehension. Where this hatred comes from and why we will have to determine…[O]ur country cannot be the victims of horrendous attacks by people that believe only in Jihad, and have no sense of reason or respect for human life.”

While further-reaching than previous statements, the spirit of this statement remained consistent with others from Trump, who has successfully built his campaign on a foundation of xenophobia, beginning with his earlier attack on Mexicans (“They’re bringing crime. They’re rapists”) and calls for a wall along the U.S.-Mexico border. This newest statement emerged even as his poll numbers drop, coming just hours after a new poll showed Trump lost the lead in Iowa to Senator Ted Cruz.

After the statement, Trump took to Twitter to extend his drumbeat of Muslim hatred for the U.S.:

The rhetoric is proving effective. At a South Carolina rally yesterday evening, Trump’s supporters cheered in support as he read his statement, which warned that without drastic action, the threat of attacks is “going to get worse and worse.” Said one supporter interviewed by the Associated Press, “Like he said, they are going to kill us and we’ve got to stop it.”

Although other Republican candidates and politicians have proposed tighter U.S. surveillance and a curtailing or banning on Syrian refugees, none have gone so far as Trump’s proposed plan. In the aftermath

of the statement, other candidates sought to separate themselves from it. John Kasich called out Trump’s “outrageous divisiveness,” while Jeb Bush tweeted that Trump “is unhinged. His ‘policy’ proposals are not serious.”

Nor are they legal, say a number of well-respected scholars who have denounced the constitutionality of Trump’s plan. They note that the only legal support for Trump’s approach stems from the largely discredited (though not explicitly overruled) Supreme Court case Korematsu v. United States, which upheld the internment of Japanese Americans during World War II.

Said Jerry Martinez, a Stanford Law professor and expert in international law, to MSNBC: “To the extent there are precedents for this kind of blanket discrimination, they are ones, like the Japanese internment camps . . . which all reasonable constitutional experts consider tragic mistakes that we should not repeat.”

Some worry that, with each of Trump’s escalations, the return of internment camps grows one step closer. If Trump is willing to ban all Muslims from entry, how long until the sequestering of Muslim-Americans already here? His anti-Islamic sentiments include closing down certain mosques located in the country and a national ID database of Muslims.