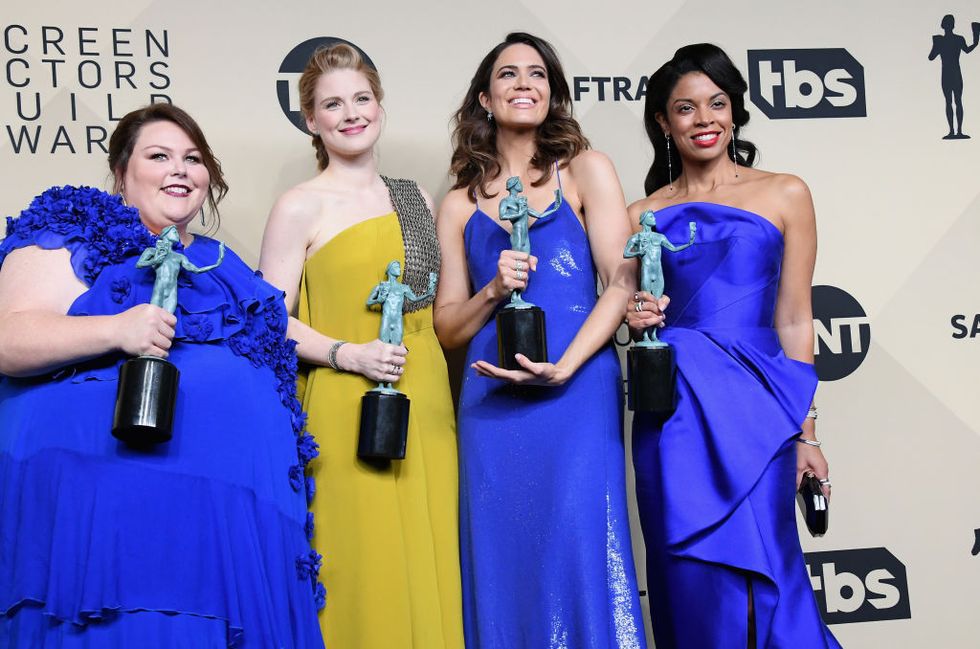 (L-R) Actors Chrissy Metz, Alexandra Breckenridge, Mandy Moore and Susan Kelechi Watson, winners of the award for Outstanding Performance by an Ensemble in a Drama Series for 'This Is Us,' pose in the press room during the 24th Annual Screen Actors Guild Awards at The Shrine Auditorium on January 21, 2018 in Los Angeles, California. (Photo by Steve Granitz/WireImage)

A new episode of This Is Us will air tonight (Feb. 27) on CTV and NBC at 9 p.m. EST. The show is back after a two-week hiatus for the Winter Olympics, which ended on Feb. 25.

The last episode aired on Feb. 6, only two days after the show's climactic "Superbowl Sunday" episode. Both episodes left fans heartbroken as the show finally revealed Jack's cause of death. Vulture gave "Superbowl Sunday" a five-star rating, after renaming the episode to "super bawl."

There are only two more episodes left in the season, following tonight's episode. The season finale will air on Tuesday, March 13 at 9 p.m. EST on NBC and CTV.

In an interview with The Hollywood Reporter, Isaac Aptaker, an executive producer on This Is Us, promised a lighter end to Season 2. He said, "It was very important to us to return with something a bit lighter and a bit more celebratory."

Milo Ventimiglia, who plays the beloved Jack Pearson, also looks forward to sharing more flashbacks of his character. "If Jack died in 1998, when the kids are 17, there’s still a lot to know," he told Entertainment Weekly. "There's a lot of life left in him."

As Elite Daily reports, Season 3 will likely show more of Rebecca's relationship with Miguel, which has yet to be explored. On the other end, flashing back, we can expect to see more of Jack's life before Rebecca.

Be sure to watch tonight's episode on CTV and NBC at 9 p.m. EST.