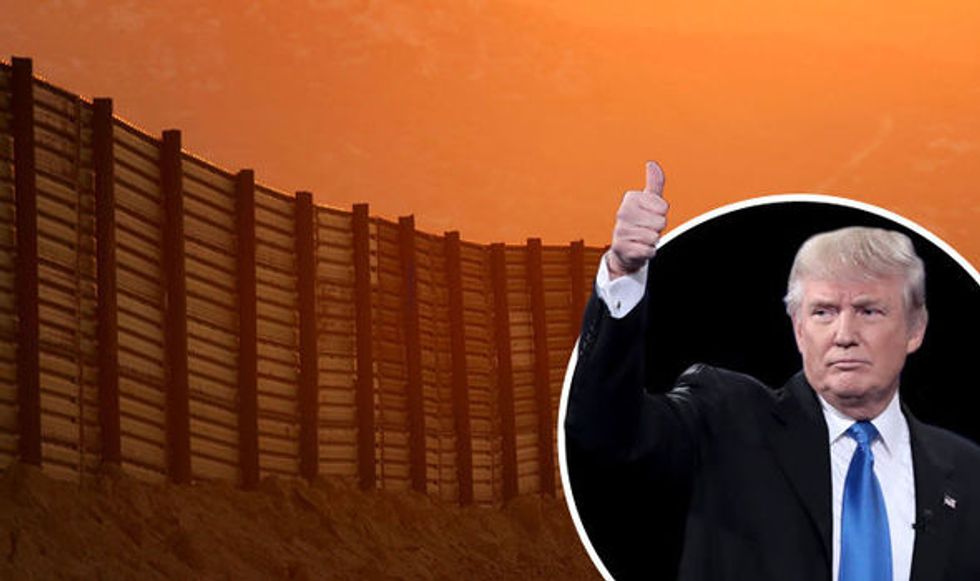 For some Texans, Donald Trump’s campaign promise to build a wall along the Mexican border is getting real. Earlier this year, Texans living along the border began receiving letters from the Department of Homeland Security, informing them that the government intends to take their property.

One of the recipients of the letter was Maria Flores, who owns property in Los Ebanos, along the Rio Grande, with her siblings. The Declaration of Taking offered her $2,900 for 1.2 acres of land. Yvette Salinas, Flores’s daughter, manages the estate.

“The United States of America is acquiring property along its border with Mexico in order to construct a fence and related improvements designed to secure the border,” read the letter. “The purpose of this letter is to confer about the amount of just compensation in this case.”

Salinas does not have to sign. But if she doesn’t, the government could nonetheless seize it through eminent domain. The landowner would be compensated, though the amount is unclear.

The 1.2 acres in question is part of a larger 16-acre tract that has been in the family for generations. Salinas said her family is against the sale, low compensation aside because it would remove their access to portions of their property. “They want to take the part on the side of the river, but we have cattle and cows there, and that would essentially mean the cattle can’t drink from the river.”

The Salinas family is not alone. Noe Benavides of Roma, Texas received a letter this March informing him that the government intends to take 5.7 acres of his land. “It’s a strip 60 feet wide by the lands on the river that we have there,” said Benavides. “And you know, I wouldn’t mind if they went parallel to the river, but they’re not. They’re following a road that I have there, and there’s probably about 20 acres plus left behind that fence.”

Salinas and Benavides have been through this before. After the Secure Fence Act of 2006, the Bush administration erected 110 miles of border fencing through Texas, much of it on private land. About 650 miles of fencing were built in total, mostly in Arizona and New Mexico. About 2,000 miles of fencing would be needed to build a sea-to-sea wall along Mexico. Of this 2,000-mile stretch, most of which is in Texas, about 67 percent is state- or privately owned. About 33 percent is federal or tribal land.

Both families escaped seizure under the Secure Fence Act through technicalities; Salinas, because her property lies on a floodplain. At the time, there was a treaty between Mexico and the United States that forbade building structures in the floodplain that could push floodwaters into surrounding communities. The U.S. has since dropped its objection to building on floodplains, clearing the way for construction on the property. For Benavides, it was only a clerical error that protected his acreage. This time around, they are not so protected.

Resistance to the Plan

Trump’s 2018 budget request foreshadows the likelihood of upcoming legal battles with residents along the border. Among other things, the budget priorities include the following bullet point: “Supports the addition of 20 attorneys to pursue Federal efforts to obtain the land and holdings necessary to secure the Southwest border and another 20 attorneys and support staff for immigration litigation assistance.”

In addition to landowners, legislators from the Texas-Mexico border area have criticized the idea of a wall. One Texas legislator, Beto O’Rourke, called the wall “racist.” Another, Henry Cuellar, focused on landowners rights. “You’re taking land that in some cases belonged to people for generations. In Texas, private property rights is a very, very important concept.”

Tom Jewetz, vice president of immigration at the Center for American Progress, a Democratic think tank, recalled the land fight that occurred in the aftermath of the Secured Fence Act. “There’s a lot of land and there are a lot of different land owners. He’s definitely throwing several billion dollars at something that is going to be unneeded, unwanted, and ineffective.”

The Trump administration plans to ask for $4 billion through 2018 for the wall’s construction, and has cited the wall’s cost at $12 billion. Homeland Security estimates that the wall could cost as much as $21.6 billion to build. This amount does not include annual repair costs.

The money to build the wall is “coming out of the treasury,” not Mexico, according to Mick Mulvaney, director of the White House Office of Management and Budget.

Representative Cuellar, who met with Mexico’s new ambassador to the United States in March , underscored that “Mexico is not going to pay for this wall.”

Democrats have castigated the proposal as Trump’s budget reveals his plan to move funds away from programs like the National Endowment for the Arts, and Meals on Wheels to build it.

“Although I believe it is important to protect our nation and our military’s strength, it is not the job of the working class to carry such a heavy financial burden by paying for the physical construction of a border wall,” said Representative Eddie Bernice Johnson, a Democrat from Dallas.

Trump’s vision for the wall is a 30-foot concrete monolith that extends without interruption across the 2000 miles of land along Mexico. This plan, according to many sources, is impracticable, at best, making the price tag even harder to justify.

The 2006 effort to build a fence along the border left gaps in the barrier so landowners could access their land south of the fence. “This is definitely not secure,” said Robert Cameron of the fence, who runs Texas Border Tours in the Rio Grande Valley. “I don’t know how that impenetrable wall is going to be built. People need access to their land.”

“We all want to secure the border, but there are smarter, better ways of securing the border. It’s a 14th-century solution to a 20th-century problem,” said Cuellar.

“Even if they build a wall, people will still come,” said Aleida Garcia, Salinas’s cousin. “What’s helped tremendously and it less expensive is the technology—the aerostat balloons, the ground sensors, and even boots on the ground.”

In the meantime, the demand letters loom.

“We don’t want this wall—the town is pretty much united on that,” said Salinas. “But we don’t want to get sued by the US government either.”