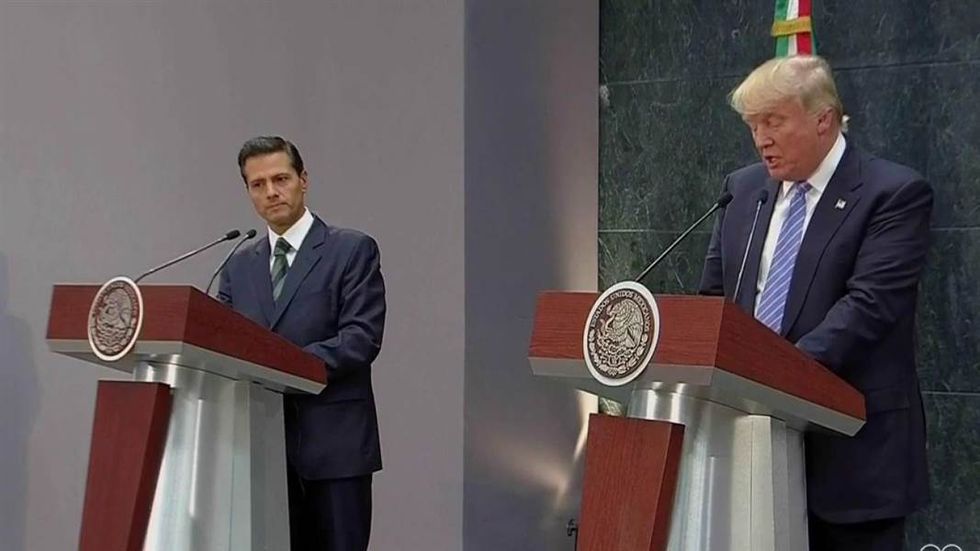 Yesterday, Mexico's Foreign Ministry offered  "all the help that can be provided" in response to the devastation across the state of Texas from Tropical Storm Harvey.

"The government of Mexico takes this opportunity to express its full solidarity with the people and government of the United States for the damages caused by Hurricane Harvey in Texas and reports that we have offered the US government all the help and cooperation that can be provided by the different Mexican governmental agencies to deal with the impacts of this natural disaster, as good neighbors should always do in times of difficulty," the agency said in a statement.

The Mexican government made the offer after President Donald Trump tweeted––once again––that Mexico would pay for his proposed border wall. Mexico reiterated that it would not pay "under any circumstances" for the wall. The president made the proposed border wall one of the cornerstones of his campaign. Since taking office, he has called for Congress to allocate money for the wall instead and have Mexico pay the U.S. back. Trump has also continuously sparred with Mexican President Enrique Peña Nieto over the proposal.

With Mexico being one of the highest crime Nations in the world, we must have THE WALL. Mexico will pay for it through reimbursement/other.
— Donald J. Trump (@Donald J. Trump) 1503841451.0

"As the government of Mexico has always maintained, our country will not pay, under any circumstances and under any circumstances, a wall or physical barrier built on US territory along the Mexican border," the foreign ministry statement said. "This determination is not part of a Mexican negotiating strategy, but a principle of national sovereignty and dignity."

The ministry's statement also addressed the president's comment regarding crime in Mexico. The agency said that crime is a "shared problem" for both countries exacerbated in part by U.S. demand for Mexican narcotics. "Only on the basis of the principles of shared responsibility, teamwork and mutual trust can we overcome this challenge," the statement said.

We are in the NAFTA (worst trade deal ever made) renegotiation process with Mexico & Canada.Both being very difficult,may have to terminate?
— Donald J. Trump (@Donald J. Trump) 1503841895.0

Mexico said its position at the negotiating table was "serious and constructive" and that it will not negotiate NAFTA nor any other aspect of the bilateral relationship through social media or the media."