Scientists Transplanted A Rat's Head Onto Another Rat. Are Humans Next?

Scientists successfully transplant a rat head onto another rat. 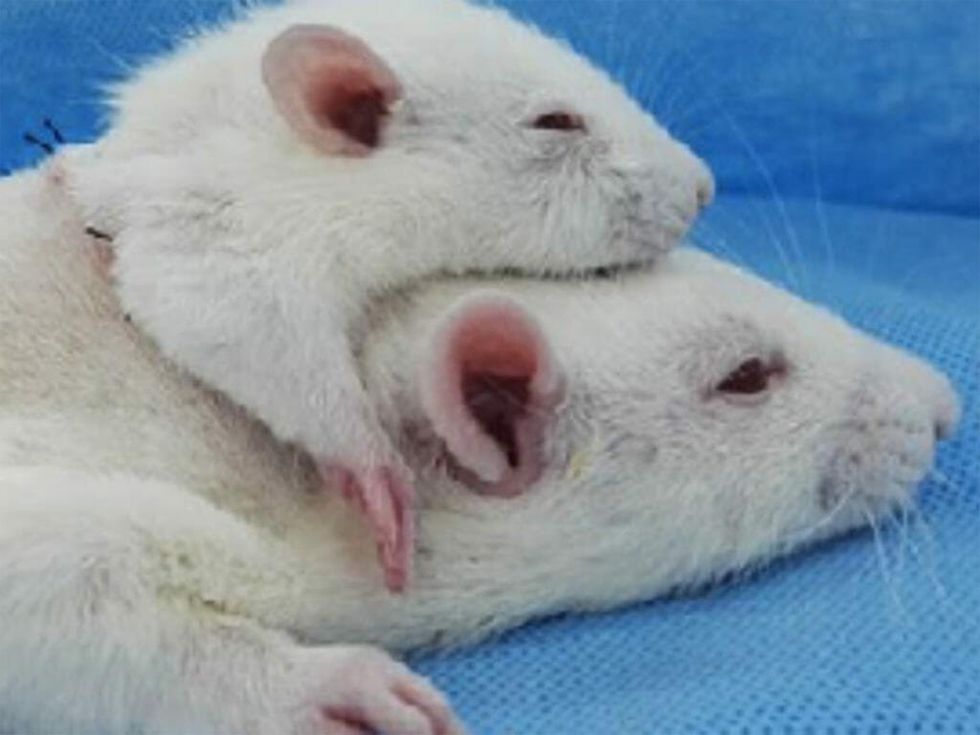 Rumors about head transplants have run rampant for years. While this may seem like the stuff of nightmares, scientists have been working toward a future where an ill or dying person could get a second chance at life—with a new body. In fact, an international research duo from Italy and China claim to have done just that. They successfully transplanted the head—and brain—of a smaller rat onto the body of another live rat.

The resulting Frankenstein is a rat with two heads, but it’s really two separate organisms—one just happens to be missing its body. This operation is a test in advance of plans to attempt the same surgery on a human later this year. The study, published inCNS Neuroscience is co-authored by Italian neurosurgeon Sergio Canavero and Chinese doctor Xiaoping Ren from the Harbin Medical University, China.

Though pictures reveal the two-headed result, the operation actually required three rats: a donor rat, a recipient rat, and a third one used to maintain the blood supply to the transplanted head. The researchers connected a pump from the third rat to the donor head to transfer blood so that the brain did not lose precious oxygen, which can lead to brain damage. The authors write that the transplanted rat head could see and also could feel pain, which demonstrated that the brain was functioning even after having been severed from its body. The rat head transplant study set out to explore issues that can arise around blood flow to the brain in such a delicate surgery, as well as issues of immune rejection, before they attempt a human head transplant, according toFuturism.

While this might sound groundbreaking, the first head transplant was achieved in 1970 by a team under the leadership of Robert White at Case Western Reserve University School of Medicine in Cleveland, Ohio. They transplanted one monkey’s head onto another monkey’s body. However, they didn’t join the two spinal cords so the monkey was unable to move and could only breathe through artificial assistance. The monkey, or its head, at least, lived nine days until the head was rejected. Canavero toldNew Scientist, “I think we are now at a point when the technical aspects are all feasible.”

Surprisingly, this is not the first head transplant Canavero and Ren have undertaken; in September 2016 they claimed to show successful head transplants on dogs, monkeys and

mice. They shared theirthree studies with New Scientist, however these papers had not undergone the traditional peer review process, so they have yet to be accepted by the larger scientific community.

In January 2016, Canavero released images of an allegedly successful monkey head transplant that Dr. Ren had performed in China, claiming the monkey had lived for 20 hours but had to be euthanized for ethical reasons. Researchers are skeptical of these results. Despite this skepticism, Canavero says they intend to perform a human head transplant sometime in 2017. Futurism reports that Canavero had said the patient would be a Russian man named Valery Spridonov, who lives with a degenerative muscular disease, Werdnig-Hoffman’s disease, but this has not been confirmed.

The process would require cooling the head and donor body to allow the newly severed tissues and cells time to survive without oxygen. They would then have to link the major blood vessels with tiny tubes before cutting the respective spinal cords and eventually connecting the spinal cords of the head and donor bodies. Canavero has said this requires flushing a chemical called polyethylene glycol into the spinal cords, and injecting it into the area hours later. In an analogy that compares the spinal cord to dry spaghetti, the chemical is supposed to help the fat in the cell membranes mesh. Canavero believes the person whose head was transplanted would be able to move the muscles in their face, feel it, and speak in their own voice.

While this may sound like ground-breaking for people who have no other chance at long-term survival, human head transplants raise ethical issues for many medical groups. “I would not wish this on anyone,” Hunt Batjer, the president-elect of the American Association for Neurological Surgeons toldThe Independent. “I would not allow anyone to do it to me as there are a lot of things worse than death.”