For the first time, two neutron stars were directly observed colliding with one another and collapsing into a black hole. For astronomers, this discovery is a huge deal, because it hints at where most of the heavy metals in our Universe, such as silver, uranium, platinum and gold, come from. 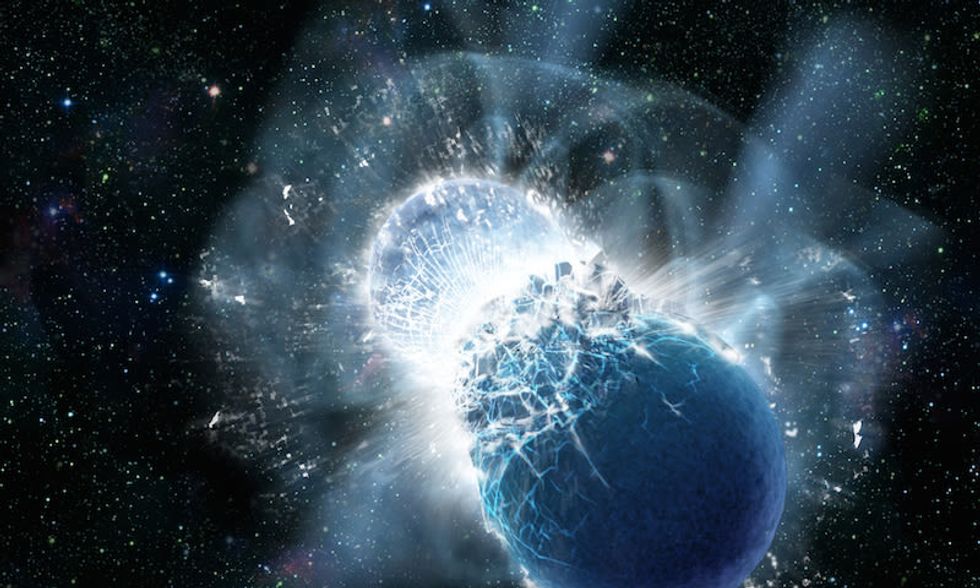 We are made of star stuff. With the exception of hydrogen and some helium, all the elements that we know and are made of were forged in the hot cores of giant stars billions of years ago. This includes carbon, nitrogen, oxygen and iron. Now, scientists are learning how most of the Universe’s heavy metals, like silver, gold, platinum and uranium, are generated. Without metals, life (as we know it) can not exist.

For the first time, in August 2017, two neutron stars were directly observed colliding with one another and collapsing into a black hole. The event occurred 130 million light years away. Astronomers at the Laser Interferometer Gravitational-Wave Observatories (LIGO) in the United States and the Virgo Interferometer in Italy detected gravitational waves, ripples in the fabric of spacetime caused by the birth of a black hole, emitting from a pair of merging neutron stars.

The resulting explosion is called a kilonova; the electromagnetic counterpart of gravitational waves. Albert Einstein predicted the existence of gravitational waves nearly a century ago, and recent detection of them confirms that empty space is, incredibly, not empty. Instead, it’s referred to as the fabric of spacetime, and it contains everything in the Universe.

The biggest astronomical discovery of 2017

For astronomers, this discovery is a huge deal, because it hints at where most of the heavy metals in our Universe, such as silver, uranium, platinum and gold, come from. The project involved 4,500 astrophysicists from around the world; in other words, most of them. Also, for the first time, gravitational waves were detected from such an event. It’s also the first time that a neutron star merger has been directly observed, although computer models predict that a kilonova should occur when neutron stars collide. Lighter metals like iron, barium, lead and tungsten are created when giant stars go supernova, blasting their guts into space in their final death throes.

When neutron stars merge and collapse into a black hole, they generate a powerful blast of electromagnetic radiation called a gamma-ray burst. GRBs are the most extreme explosions in the universe. Because they occur as focused jets of energy, GRBs need to be facing Earth to be seen. GRBs are so energetic that one occurring in our stellar neighborhood could easily sterilize the surface of our planet. In fact, some scientists believe that a GRB could have been responsible for the Great Dying, a mass extinction event that wiped out 95 percent of all life on Earth 250 million years ago.

What are neutron stars?

Neutron stars are arguably the wildest objects in the Universe. Neutron stars are created when massive stars with cores of 1-3 solar masses go supernova. The stars’ cores collapse under their own gravity once the star begins to fuse iron. Neutron stars are only 10-12 miles across, but have the mass of roughly 1.4 suns. This makes them almost unimaginably dense; just a teaspoon full of neutron star material would weigh billions of tons. For scale, this would be like shrinking all of Earth’s mass into a volume the size of a golf ball.

Neutron stars are so dense that their protons and electrons are forced together by gravity, forming a hot sphere of neutrons. It’s understandably difficult to form a visual of this. Their gravity is so strong that NASA compares their impact to “a marshmallow impacting the star's surface [hitting] with the force of a thousand hydrogen bombs.”

Amazingly, some neutron stars have planets orbiting them. In 2011, astronomers discovered a planet five times larger than Earth orbiting a neutron star. Originally a white dwarf, which is the dead core of a sun-like star, it lost most of its mass to its companion neutron star (though its diameter is about 3,000 times the diameter of its host star). The leftover material solidified into crystallized carbon, better known as diamond. The planet orbits its star in only two hours, and the distance between the planet and neutron star would fit inside the Sun. The Universe rarely makes just one of anything, so it’s therefore reasonable to suspect that our galaxy, the Milky Way, is littered with dead stars and planets that are made of diamonds.

There are two type of neutron stars: magnetars and pulsars. Magnetars have the strongest magnetic fields in the Universe. These magnetic fields are a trillion times stronger than Earth’s, and hundreds of times more powerful than typical neutron stars. Magnetars also emit powerful X-rays and gamma rays. Most neutron stars, however, are pulsars. Pulsars emit powerful jets of charged particles from their magnetic poles, a result of their fast rotation. This generates rotating beams of light, which can be seen from Earth, assuming they are pointing in our direction. Because the supernovae that created them are so powerful, pulsars rotate very rapidly. The most rapidly rotating radio pulsar so far discovered whips around at 716 times per second. Pulsars are, in a sense, cosmic lighthouses.

How do neutron stars create gold and other heavy metals?

As neutron stars approach each other, their rotational speed increases. Protons and neutrons are flung out into space in hot clouds of plasma, or superheated gas. “It’s like taking two jelly donuts and slamming them together,” said Dan Kasen, a member of the team of thousands that made the discovery. The intense heat and outward pressure of the expanding gas forces the nuclei of atoms together into metals like iron, silver, gold and uranium. As they drift through interstellar space, these heavier elements mix with other elements, eventually becoming part of rocky planets like Earth. The LIGO discovery found the amount of gold equivalent to ten Earths.

Iron and heavier elements are also created when giant stars explode as supernovae. The fusion of iron is what kills stars; fusing iron requires more energy than a star can produce in its core, and once a star begins fusing iron, a supernova occurs within a few seconds. This miniscule drop in outward pressure allows gravity to take over, and gravity always wins. The core collapses into a neutron star (or black hole in even more massive stars), and the outer layers are blown out into space. As this occurs, heavy elements like nickel, lead and cobalt are forged from the enormous pressure and high temperatures generated in the explosion. Stars big enough to create iron and other metals only live for a few million years, as they burn through their fuel faster than smaller stars like the Sun.

Does the Sun forge heavy elements too?

Nope. Stars like the Sun don’t have enough mass to forge heavy elements. Still, the Sun fuses a whopping 660 million tons of hydrogen into helium every second. In about one or two billion years, the Sun will begin to run out of hydrogen. As it starts to fuse helium into elements like carbon and oxygen, its outer layers will expand from the more intense pressure coming from the core, becoming a red giant.

At this point, Earth will be destroyed. The outer layers will form a planetary nebula (and they are gorgeous), gradually dissipating into space. The Sun will then become a white dwarf star; a super-dense Earth-sized ball of cooling stellar ash, made mostly of carbon. Eventually, white dwarf stars cool to the point of being black dwarfs. Black dwarfs have never been observed and are entirely theoretical, however, because the Universe isn’t old enough for any to have formed… yet.

Stars are the best example of how good the Universe is at recycling material. Stars like our Sun are, in fact, the children and grandchildren of massive stars that went supernova in the distant past, blasting into space the materials needed to form suns, planets and, of course, life. We are the Universe, and the Universe is us.