'Lucy' May No Longer Be Our Oldest Found Human Ancestor

Paleontologists in Germany discovered fossilized teeth that could rewrite our understanding of early human history and evolution. 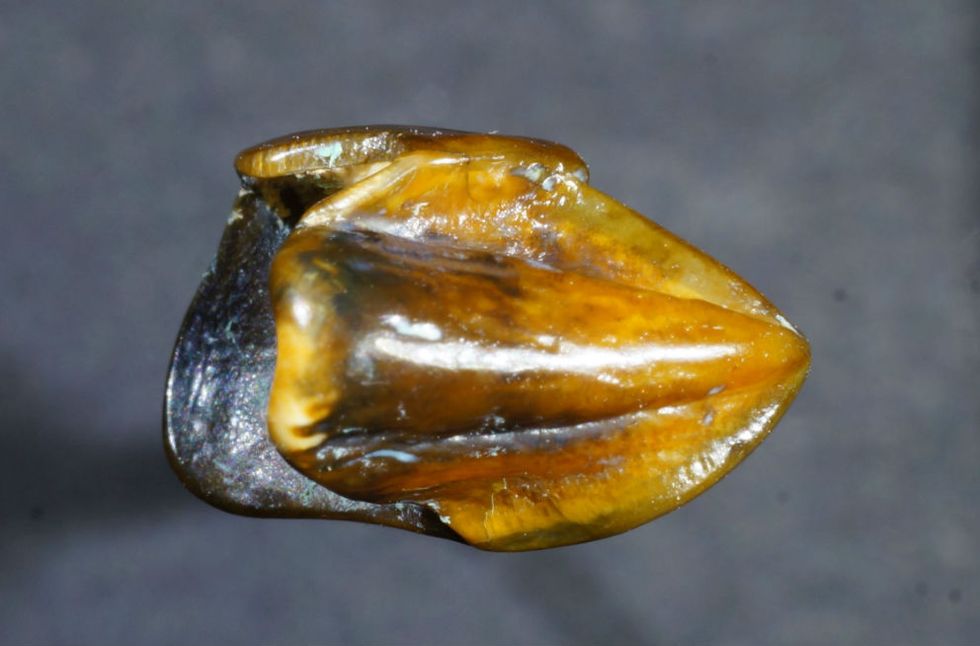 One of the teeth which was found in the excavation. Photo: DPA.

Forty-three years ago in east Africa, a team of scientists unearthed fossilized skeletal remains that rewrote the history of humanity. “Lucy,” an extinct primate of the family Hominidae (which includes humans), walked upright 3.2 million years ago and was believed to be our oldest found human ancestor. Last year, however, paleontologists in Germany discovered fossilized teeth, three times older than Lucy, that might once again rewrite our understanding of human evolution.

The dental remains were found during a research excavation near the town of Eppelsheim, in a former bed of the the Rhine river. The region has been a popular location for fossil hunters ever since a fossilized femur found in the 1820s launched the fields of paleontology and paleoanthropology. Deutsche Welle reports that although the 9.7 million-year-old teeth do not match any other known species found in Europe or Asia, they do resemble those belonging to Lucy. This baffled the research team so much that they delayed publishing their research for a year.

Herbert Lutz, director of the Mainz Natural History Museum and head of the research team, spoke with local media about the newly discovered dental remains: “They are clearly ape teeth. Their characteristics resemble African finds that are four to five million years younger than the fossils excavated in Eppelsheim.”

“This is a tremendous stroke of luck, but also a great mystery,” Lutz added. Local archeologist Axel von Berg says the findings will “amaze experts.”

Named after the Beatles song “Lucy in the Sky with Diamonds,” Lucy is several hundred pieces of bone fossils, representing 40 percent of a female skeleton, that were discovered in Ethiopia in 1974. Later classified as a hominid and designated as the species Australopithecus afarensis, she was previously the most ancient early human ever unearthed. Michael Ebling, the mayor of Mainz, speculates that the recent dental discovery will force a reassessment of early human history.

"I don't want to over-dramatise it, but I would hypothesise that we shall have to start rewriting the history of mankind after today," Ebling said.

Lucy and present-day humans are both classified as hominids, which is the term used for all members of the biological family Hominidae. Hominids (“Great Apes”) are primates that include today’s orangutan, gorilla, chimpanzee, bonobo, and human. Present day humans are of the subclassification genus Homo (which means “human”) and the species sapien. Though Homo sapiens are the only humans today, there have been other humans in the past: on the same evolutionary branch are the now extinct Homo neanderthalensis, and our ancestor Homo erectus. All human species past and present are distant descendants of Lucy’s species.

The origin of Homo Sapiens & timeline of human evolution

The Eppelsheim discovery finally provides fossil evidence that hominids, specifically a species closely related to humans, roamed Europe millions of years ago. This drastically changes the current scientific consensus that modern humans evolved out of East Africa between 400,000 and 200,000 years ago, before dispersing around the world as late as 70,000 years ago.

While the teeth are unlike anything found in Europe and Asia, Lutz is cautious to say what that means. “We want to hold back on speculation. What these finds definitely show us is that the holes in our knowledge and in the fossil record are much bigger than previously thought,” Lutz said in an interview with ResearchGate. “It’s a complete mystery where this individual came from, and why nobody’s ever found a tooth like this somewhere before.”

Others believe the mystery simply stems from confusion and misidentification, doubting that the teeth signify a new origin story for humans. Instead, experts like University of Toronto paleoanthropologist Bence Viola think the teeth more likely belong to a very distant branch on the primate family tree. An expert on the teeth of humans' extinct relatives, Viola says that one of the teeth, a molar, contradicts any case for a human connection. “I think this is much ado about nothing,” Viola wrote to National Geographic. “The second tooth (the molar), which they say clearly comes from the same individual, is absolutely not a hominin, [and] I would say also not a hominoid.”

The teeth are currently on display at the Mainz Natural History Museum. Lutz and his research team published their first paper last month regarding the discovery, which can be read HERE.