How Trump's EPA Chief Is Waging Open War On Science 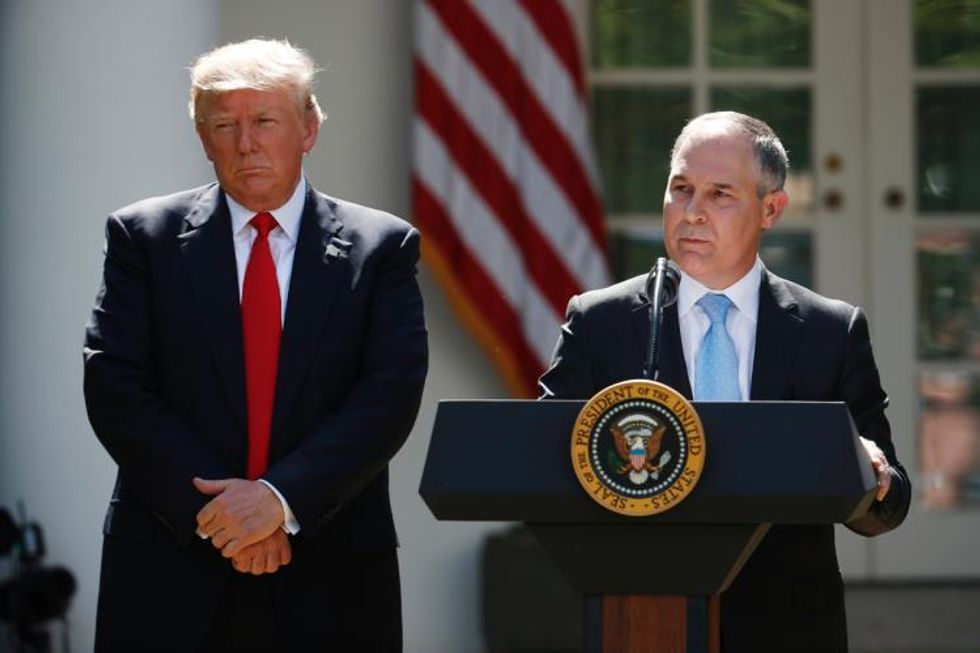 More than a few of President Donald Trump’s appointees to key cabinet posts hope to diminish — or even shutter — the very agencies they now lead.

In the 2012 primaries, Texas Governor Rick Perry famously said that he wanted to abolish the Department of Energy. Fast forward five years, and he’s now the Secretary of Energy. Betsy DeVos is a staunch supporter of private and charter schools — so long as they are unfettered by government oversight — but she has been a loud and vocal critic of public schools in America, and her many provocative statements sent ripples of fear through the educational community. DeVos is now Secretary of Education.

And then there’s Scott Pruitt, the nominal head of the Environmental Protection Agency (EPA). Pruitt can be judged not only by his words, but by his deeds, and there’s little doubt that he is at odds with the organization where he now directs policy. He’s on record as a vehement climate change denier and, as Oklahoma’s attorney general, he sued the EPA more than a dozen times as the agency fought to limit emissions of smog, mercury, and greenhouse gases.

Every environmental activist has been girding for an epic battle. If the early days of this administration are any indication, it promises to be a tumultuous time at the agency that is supposed to keep America’s air and waters free of harmful pollution.

For his part, Pruitt wants to return to an era before coal, mining and oil companies were hampered by onerous regulations. He would prefer his success be measured by the number of Obama’s environmental regulations he rolls back; regulations that he believes make it harder for companies to do business. He also wants individual states to decide which regulations to enforce, arguing that the previous administration’s top-down approach was killing industry.

Since his appointment in February, Pruitt has met stiff opposition at every turn. It’s not a surprise that environmental groups would be on the offensive. But it might surprise many to learn that Pruitt is finding deep resentment and resistance within the very agency that he heads. In order to enact his agenda at the EPA, he will have to overcome the experts and committed career bureaucrats who work for him — who understand the science of climate change and the need for urgent action.

One of the fiercest blasts came earlier this month from Elizabeth Southerland, a senior scientist who ended her 30-year career at the agency with a scathing review of Trump policies, and bemoaning the ascendancy of myth over science.

“The truth is there is NO war on coal, there is NO economic crisis caused by environmental protection, and climate change IS caused by man’s activities,” writes Southerland in her resignation letter. She added that dozens of regulations already scrubbed from the books will hurt Americans where they live, drink and breathe, and argues that potential budget cuts will make the agency nothing more than a hollow shell.

Outside the agency, environmental activists have been outraged by Pruitt’s appointment from day one, condemning his confirmation in terms like “a sad day for the country” and the “stuff that Big Oil’s dreams are made of.”

The Sierra Club went one better. In March, after Pruitt denied that carbon dioxide emitted by fossil fuel combustion was driving climate change, the environmental group launched a formal complaint with the EPA’s Office of the Science Advisor claiming that Pruitt had flouted the department’s Scientific Integrity Policy by knowingly spreading misinformation.

The charge failed. In early August, Pruitt was cleared of wrongdoing by the Office of the Science Advisor, which cited a key but terse passage from the Scientific Integrity Policy in rendering its decision.

It’s made many wonder what is going on at the EPA, since Pruitt’s contention is as tendentious as suggesting that microbes don’t cause disease or that smoking doesn’t cause cancer. The scientific consensus that anthropogenic global warming is advancing at a dangerous pace is overwhelming. Sophisticated, accurate computer models and thousands of peer-reviewed scientific studies all point in the same direction.

Mixed messages from the EPA

Many wonder if politics might already be in play. Think Progress curiously notes that the Scientific Integrity Policy wasn’t fully quoted in publicizing this decision. A fuller reading provides ample evidence that the issue is more nuanced than the Office of the Science Advisor has suggested.

When an Agency employee substantively engaged in the science informing an Agency policy decision disagrees with the scientific data, scientific interpretations, or scientific conclusions that will be relied upon for said Agency decision, the employee is encouraged to express that opinion, complete with rationale, preferably in writing. It is expected that any differing scientific opinions will be resolved during internal deliberations and if not, will be addressed during scientific peer review.

The document further explains that when an EPA employee publically disagrees with established policy, he or she must indicate that they are speaking as a private citizen and that their contentions are not official agency positions.

Pruitt failed to meet either of these requirements, so environmentalists held this decision up as proof that the EPA is slowly being dismantled from the inside.

Certainly, the evidence supports this claim. With the White House mired in constant, wide-ranging controversies, a number of important stories have only garnered passing note. But this administration, and Pruitt, have been very busy.

Interestingly, the opening salvo against environmental legislation came after Pruitt was tagged for his new post, but before he could be confirmed. The White House launched a war on science — and, by extension, President Obama’s environmental legacy — by scrubbing all mention of climate change from its official website. In the months since, that imperative has spread like a contagion to several government websites, including the Department of Energy, Department of the Interior, and the EPA.

Once Pruitt was confirmed, he joined the White House efforts to dismantle onerous legislation designed to curtail carbon emissions. The most momentous switch for the Trump administration was largely symbolic as the president announced that the U.S. would withdraw from the Paris Climate Accord. Though many Republicans applauded the news, a full withdrawal from the accord can only occur in four years, and may be reversed in November 2019 if Trump fails to win reelection.

White House budgets are aspirational and, due to the EPA’s strong influence during the Obama Administration, President Trump proposed a budget that would cut EPA funding by nearly one-third, and shift that money to defense spending. It flies in the face of common political sense because, on the whole, environment stewardship enjoys a plurality of support in both political parties, though Republican enthusiasm has waned notably during the Bush and Obama administrations. But budgets are hammered out in Congress, so Trump’s EPA proposal went nowhere, and the agency’s money was largely left intact, with increased funding for renewable energy programs.

But that bill, and the fiscal year, both end on September 30, 2017, and it’s déjà vu all over again. For 2018, the White House has again proposed EPA budget cuts of nearly 30 percent, which includes reducing funding to the EPA federal enforcement by 40 percent, and the culling of 3,800 jobs. Through Pruitt, Trump would eliminate cleanup programs in the Great Lakes, Chesapeake Bay, and Puget Sound, and shutter the Energy Star Program — which helps consumers purchase the most energy-efficient home appliances.

In a similar vein, the budget takes aim at environmental programs at other government agencies. Research to better predict tornadoes in the South? Eliminated. A tsunami warning system for the Pacific Coast? Eliminated. Grants to renewable energy companies through Rick Perry’s Department of Energy? Eliminated, of course.

Funding for pure science would also be cut, with climate change research budgets at NOAA and NASA eliminated or severely curtailed.

With environmental enforcement and state environmental cuts at 40 and 45 percent respectively, it’s very likely that unlawful pollution by disreputable businesses and industries would spike dramatically.

But only if Trump gets his way for 2018. Unfortunately for the White House, the Budget Control Act passed in 2011 — better known as sequestration — makes it difficult for Trump to cut nondiscretionary funding from various government departments and move it to defense. Congress can overcome this impediment, but only with 60 votes in the Senate, and it’s hard to see any Democrats supporting such a shift in priorities.

With Trump unable to fulfill his campaign promise to outright kneecap the EPA, Pruitt is turning to other means to remake the agency as a pro-business cheerleader. In May, at least half of the 18 experts on a scientific review board — the Board of Scientific Counselors (BOSC) — have been, as one member colorfully suggested, “trumped.” Instead the panel will be reconstituted with business leaders from heavily-polluting industries.

In June, fully 38 members of a BOSC subcommittees were sent packing to make room for “new blood” from the very industries the EPA is designed to monitor.

The message seems clear. Science is out of fashion at the EPA. After dismissing and probably replacing many advisory scientists with business tycoons, Pruitt is now suggesting that the American public deserves “a true, legitimate, peer-reviewed, objective, transparent discussion about CO2.”

To do so, Pruitt suggests a red team-blue team approach would lead to a lively and authoritative debate. In a nutshell, the red team would challenge the scientific consensus, and the blue team would be forced to defend it.

But, as several scientists have suggested, science already has a red team, and it’s called peer review. Scientific studies supporting climate change have already been vetted by acknowledged experts in the field. A red-blue approach also injects a false equivalency into the debate by creating two equal sides. To reflect the true nature of scientific opinion, as HBO comedian John Oliver once explained, the red team should only have two members to the blue team’s 98, and debate times should be apportioned by the same percentage.

It remains to be seen if Pruitt will get his wish. He’s acting quietly because he knows his machinations would be darkly viewed. According to the New York Times, Pruitt is accompanied by armed guards everywhere he goes — even in the EPA — and senior employees don’t have access to him. He is cutting environmental oversight dramatically, changing regulations without consulting experts, removing vital information from the EPA website, and doing so in secrecy.

In the meantime, the Chinese have a curse: May you live in interesting times. Clearly, the next four years will be unsettling for anyone who cares about clean air and water. But although science is on the run, many activists are heartened to see Pruitt being hoisted on his own petard: the courts. He delighted in taking the Obama administration to court, and environmental groups and progressive states are deploying the same approach, to greater effect.

When the EPA Administrator paused an Obama-era regulation limiting oil and gas industry emissions, a federal appeals court refused, and forced the regulations to be implemented. Pruitt was also forced to backtrack on ozone emissions after 16 attorneys-general filed a lawsuit at the United State Court of Appeals in DC.

Even Obama’s signature legislation, compelling power plants to reduce carbon emissions by 32 percent by 2030, could be tied up in hearings and court challenges for years.

The question still to be answered is if Pruitt will implement the legislation with a wink and a nudge. As Trump suggested with his budget, EPA enforcement isn’t a high priority. But it might not matter. Economies of scale and new technologies have largely made the renewable energy a better deal than traditional fossil fuels, and they certainly could employ many more people. The future arrived at just in the nick of time.

So perhaps an old Rolling Stones song will become a rallying cry for environmentalists. “You can’t always get what you want… But if you try sometimes, you just might find, you get what you need.”