Everyday Items You Didn't Know Were Invented By Women

Men have almost exclusively monopolized the role of the world’s decision-makers; here are some oft-overlooked women who have molded the course of history. 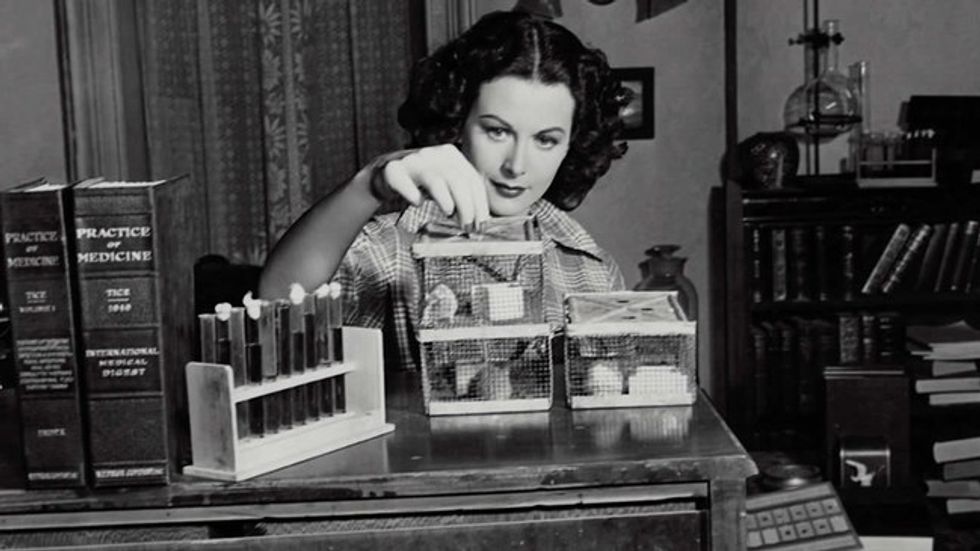 Throughout modern history, women have had to navigate a world predominantly run by men. Whether at the podium or the pulpit, the rig or the rectory, the boardroom or the bedroom, men have almost exclusively monopolized the role of the world’s decision makers.

While males hold a slight lead in terms of population (102 men for every 100 women), they hold a tremendous lead in terms of corporate leadership. In fact, of the Fortune 1000 CEOs, only 54 of them are female. And in Fortune’s top 50, females currently fill three CEO positions.

We live in a civilization wherein the accomplishments of women are far less celebrated than those of male counterparts. Yet many of their contributions not only changed the quality of life for our ancestors, they molded our history. To appreciate the importance of female contributions, consider the following modern “day in the life” illustration:

Your day starts at home, and you have a long list of things that need to be accomplished. You gather the baby and pack his bag for a trip to your favorite discount department store. To save a few minutes you hop on your computer and fill up the online cart with a few things you need: coffee filters, chocolate chip cookie mix, a birthday present for your 10 year-old-nephew, maybe even a new pair of windshield wipers.

The technology that enables your access to the Internet essentially was invented by a woman. That’s right. Hedy Lamarr, the beautiful, green-eyed actress of 1930s and 1940s films (Algiers [1938], Tortilla Flat [1942], White Cargo [1942], SamsonandDelilah [1949]) was the co-inventor of “spread-spectrum radio” during World War II. Working with composer George Antheil in 1942, Lamarr and Antheil’s “Secret Communication System” solved the problem of enemies blocking signals from radio-controlled missiles. The invention of the transistor and its later miniaturization made Hedy’s idea critical to the military and to the cell phone industry.

You’re Online Thanks to a Woman – Now What?

Did you know that your online shopping cart is possible because of the groundbreaking work of Dr. Grace Murray Hopper? Dr. Hopper, who was a U.S. Navy reservist during World War II, became a senior computer programmer at Remington Rand after the war and worked on the first large-scale computer – UNIVAC. In the late 1950s and early 1960s she was the lead programmer for the team that developed the first user-friendly business computer software program – COBOL (Common Business-Oriented Language). The technological foundations and concepts that sprang out of her work – including the manual punch system she invented in 1953 that converted human commands into computer code – were the very building blocks of Internet commerce.

But long before Dr. Hopper developed her first piece of code there was Augusta Ada Lovelace. Born in 1815, Lovelace was the only child of Annabella Milbanke and the poet Lord Byron. Her mother, who had mathematical training and whom Lord Byron referred to as his “Princess of Parallelograms,” insisted that her daughter study mathematics. Good thing.

At the tender age of 17, she met and began working with renowned mathematician Charles Babbage. She helped translate his “analytical engine” into an algorithm for Bernoulli numbers (principles that apply to the flow of fluids). Then, in 1843, she published a translation from the French of an article on the Analytical Engine by an Italian engineer, Luigi Menabrea, to which Ada added extensive notes of her own. Her notes included the first published description of a stepwise sequence of operations for solving certain mathematical problems, earning her the title as “the first programmer.”

So now that you’ve gone online and filled up your shopping cart—both tasks thanks primarily to women—you head out to pick up your order. You strap the baby into the car and head to the store. You park, remove Junior from his car seat and let him sink into the carrier strapped to your chest. If you, too, are grateful for this invention that allows you to exercise, cook and move at your own pace, while calming the baby and keeping him close, then you need to give a nod to Ann Moore.

Inspired by watching content and happy African babies, Ann Moore attempted to construct her own carrier when she returned from the Peace Corps and became a mother. She could not successfully secure the carrier to function on her back; rather, she moved the device to her front and named it the Snugli. There are no words to accurately describe the freedom of being able to use your arms and hands while also holding a baby. If you’ve been there, you know.

When you arrive to pick up your order, in your actual, physical shopping cart are three items: coffee filters, windshield wipers and the gift you chose, the classic board game of Monopoly. All three of these household essentials were invented by women and sprung from necessity. (Fun fact on the game of Monopoly: it was invented by a woman named Elizabeth Magie and was originally named “The Landlord’s Game.” It was intended to demonstrate the evils of land-grabbing.)

In your challenge to get out of the house with a baby, you neglected to bring your recycled plastic shopping bag. You might need to grab a paper one from the checker’s counter and snap it open. That bag would not stand up by itself if it were not for Margaret Knight.

While working in a Massachusetts paper bag plant after the Civil War, Knight thought it would be much easier to pack items in paper bags if the bottoms were flat (which they were not at the time). That idea inspired her to create the machine that would transform her into a famous woman inventor. Knight's machine automatically folded and glued paper-bag bottoms – creating the flat-bottom paper bags that are still used to this day in most grocery stores.

Her biography underscores the challenges faced – which still exist today – by women with brains:

“Of course, no story of triumph would be complete without a villain. In this case, the villain was a man named Charles Annan – who attempted to steal Knight's idea (he spied on the woman hired to make her prototype) and receive credit for the patent. Not one to give in without a fight, Margaret took Annan to court to vie for the patent that rightfully belonged to her. While Annan argued simply that a woman could never design such an innovative machine, Knight displayed actual evidence that the invention indeed belonged to her. As a result, Margaret Knight received her patent in 1871.”

Once home you fire up the oven and think about baking those cookies. You reach into the paper bag and realize that you forgot to buy them. You improvise with scratch cookie dough and baker’s chocolate. But the chocolate fails to melt, so you substitute a chocolate bar broken into small pieces.

That’s exactly what Ruth Wakefield did. Don’t recognize her name? She’s the owner of the famous Toll House Inn. When her baker’s chocolate did not blend with the cookie dough, she broke a semi-sweet chocolate bar into small pieces and – voila! Twelve minutes later she had created chocolate chip cookies, which still hold the number one slot as America’s favorite.

Time for a Beer?

After the shopping and the baking, it’s time to relax for a few minutes, so you grab a beer and settle down with a magazine. Dad takes the baby for some playtime and you crack open the growler.

Despite being traditionally marketed to men, beer comes courtesy of our foremothers over 7,000 years ago. Beer was created during a time when running taverns, operating the equipment, and brewing beer was strictly women’s work. Beer became a staple of the Norse diet, and female brewers earned significant money for their households. Of course, today’s beer is considerably different than the beer of 7,000 years ago, whose main ingredients consisted of bear saliva and honey.

You’re enjoying your deliciously cold brew and your article when the phone rings. You’re not ready to step out of your solitude, so you check the caller ID first and see that your ex-husband’s new wife is calling you.

That’s when you pause and thank Shirley Anne Jackson for your ability to recognize and ignore that call. Caller ID was not Jackson's only “first." She was also the first black woman to earn a Ph.D. from the Massachusetts Institute of Technology (MIT) and the first woman to chair the U.S. Nuclear Regulatory Commission (NRC).

Your beer break over, it’s time to clean up and put away the cookie dough leftovers. The butter gets placed on a small dish and returned to the refrigerator. The eggs get loaded into that molded holder designed only for eggs. And of course, both the butter dish and the egg tray have their very own refrigerator shelf designation. For the shelves in the refrigerator and so much more, you need to pay homage to “the mother of modern management,” Lillian Moller Gilbreth.

Gilbreth, who was an industrial psychologist by trade, mothered 12 children and became masterful at inventing items that maximized human efficiency. Gilbreth and her husband/business partner, Frank, focused their industrial psychology experiments on the tedious chores that demand more efficiency than skill. By the end of her career, Gilbreth had become the first female professor in the engineering school at Purdue University and the first woman elected to the National Academy of Engineering.

As you continue tidying your kitchen, take a second look at that trash can pedal you are stepping on to open the lid. Gilbreth also is responsible for that creation, which is critical to well-equipped kitchens worldwide. Scholars of today deem her “a genius in the art of living.”

Time to gather the baby who has been playing with Dad for the last couple of hours. Baby needs a diaper change, so you scoop up the little one and head for the changing table. Baby’s skin is soft and delicate and you are grateful to Marion Donovan for eliminating the need for dangerous pins, non-absorbent cloth and rash-causing plastic pants. The diaper cover started from a shower curtain that was then finessed with snaps and pins. Marion thought that the garment looked like a boat and named the cover a Boater. In 1951 she received her patent for the diaper cover, then moved on to create the first disposable diaper, which took a full decade to gain market approval. In 1961 came the very first disposable diaper – Pampers. Marion Donovan went on to earn 20 patents during her lifetime.

The wiper blades are replaced on the car, the Monopoly game present is wrapped and the cookies are cooling. Time to change into your comfortable clothes and relax. As you pull those cottony-soft pajamas out of the dresser, consider the contribution of Sally Fox, whose Fibre-cotton creation revolutionized the clothing industry. Fox, while working as a pollinator for a cotton breeder, isolated and developed two colored strains of cotton, brown and green. These colored cotton fibers had longer stems, could be spun on a machine and could be replanted over and again. With the colored cottons, bleaching and dying the products was no longer necessary, saving the environment from the output of toxic pollutants. Fox patented the two colored strains and purchased land to continue to grow and replant the cotton. Sally Fox’s environmentally sustainable cotton ultimately helped grow companies including Levis, Land’s End and LL Bean.

To be fair, many of the women included in this article had to work with men along the way. In some cases, the women were not taken seriously and therefore, neither were their inventions or innovations. These female inventors were not motivated by money, fame or power; efficiency and practicality was their objective. It had to be. They were working women, who changed our lives by turning innovation into invention.