Michelle Wolf Just Savagely Clapped Back at Donald Trump After He Tried to Shame Her Over Her White House Correspondents' Dinner Speech, and She Used Melania's Hashtag Against Him 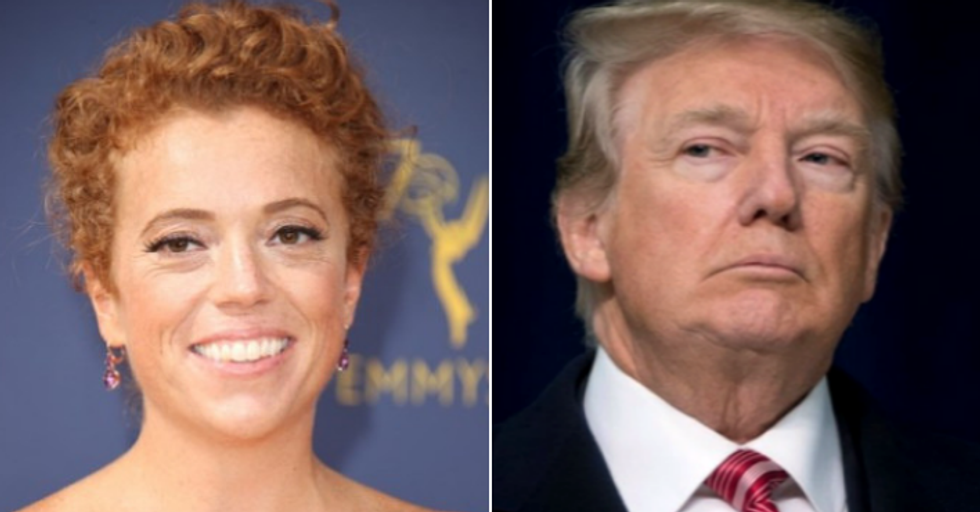 After decades of the White House Correspondents Dinner (WHCD)—put on by the White House Correspondents Association—featuring a roast style comedian as the guest speaker, the WHCA announced Monday it would replace the usual comedian with author and presidential biographer, Ron Chernow. And both last year's speaker, comedian Michelle Wolf, and President Donald Trump had something to say about it on Twitter.

The annual event is a century old tradition. According to last year's dinner chair, the WHCD "has been and will continue to be a celebration of the First Amendment and the important role played by an independent news media in a healthy republic."

This year, the WHCA took to Twitter to announce a new direction for the planned 2019 event.

Which President Trump couldn't help but comment on in a barbed tweet on Tuesday directed at Wolf, whose speech last year caused a stir, ruffling the feathers of the thin-skinned commander in chief and his aides.

"So-called comedian Michelle Wolf bombed so badly last year at the White House Correspondents’ Dinner that this year, for the first time in decades, they will have an author instead of a comedian. Good first step in comeback of a dying evening and tradition! Maybe I will go?"

But Wolf immediately fired back with a reference to Trump's announcement that he would back Saudi Arabia and their Crown Prince even though they directed the murder of a United States resident, journalist Jamal Khashoggi.

"I bet you'd be on my side if I had killed a journalist. #BeBest"

Wolf also included a reference to First Lady Melania Trump's anti-bullying campaign: Be Best. This is not the first time the two sparred on Twitter since the 2018 WHCD.

Others also weighed in on Trump's dig at Wolf and the WHCA capitulation to White House pressure.

People had plenty to say in response to the President's dig at Michelle Wolf and the reason for WHCA changing their longstanding traditional dinner format.

@realDonaldTrump No, it's because EVERY president before you, including Nixon had a sense of humor & attended, laug… https://t.co/zEtCaGZzLj
— N TX Resistance (@N TX Resistance) 1542812090.0

@realDonaldTrump I do believe you should!! It's been way too long since a room full of people laughed at you.
— Angelika Sabine (@Angelika Sabine) 1542813828.0

One Twitter user pointed out that more people viewed Michelle Wolf's WHCD remarks on C-SPAN than had watched President Trump's inaugural address according to the views count on each video. "252K" watched Trump while "6.8M" watched Wolf.

But others assured someone would pick up the slack.

Some asked about the President's fears.

Others thought skipping the 2019 WHCD event might still be a good idea for Trump.

@realDonaldTrump you won't go, you're a coward! Just like you're scared to visit troops
— CuttleBoogie (@CuttleBoogie) 1542819720.0

The annual White House Correspondents Dinner is scheduled for April 27, 2019.