A Republican Congressman Is Sounding the Alarm About Russian Influence Over Trump, and He Would Know 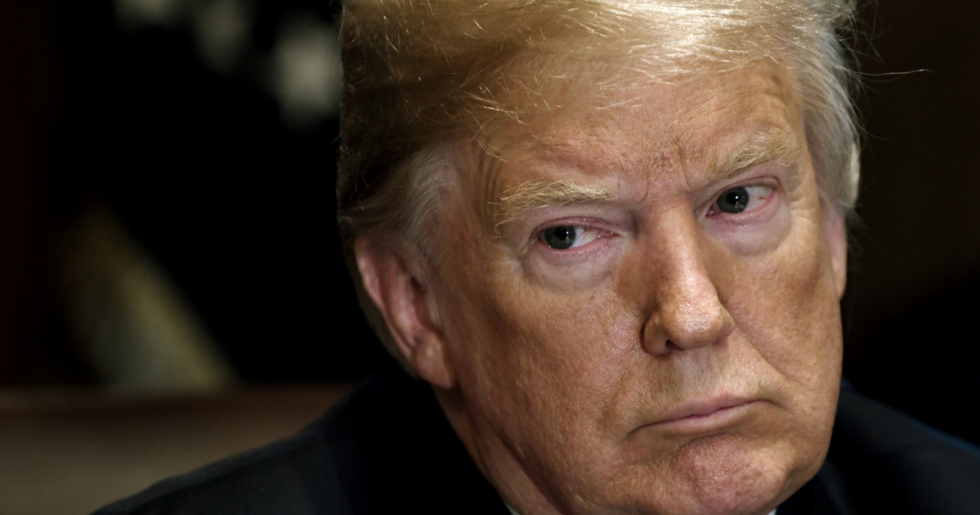 WASHINGTON, DC - JULY 18: (AFP OUT) U.S. President Donald Trump looks on during a cabinet meeting in the Cabinet Room of the White House, July 18, 2018 in Washington, DC. (Photo by Olivier Douliery-Pool/Getty Images)

A Republican congressman is sounding the alarm on Russia's influence over President Donald Trump, adding to growing public opinion that the president is being manipulated and even controlled by Russian President Vladimir Putin and his vast covert intelligence operations.

In a blistering op-ed in Thursday's New York Times, Will Hurd of Texas wrote that Trump "actively participated in a Russian disinformation campaign" by meeting with Putin in Helsinki, Finland on Monday.

Hurd, citing his experience as a former CIA officer, said he "never thought I would see the day when an American president" would become a target of manipulation by Russian intelligence.

Hurd accused the president of failing to defend the American intelligence agencies' unanimous conclusions that Russia attacked the United States by hacking the 2016 presidential election and mounting a campaign to influence voters in favor of Trump.

"By playing into Vladimir Putin's hands," Hurd warned, Trump "actively participated in a Russian disinformation campaign that legitimized Russian denial" by holding a private summit with Putin in Finland.

Hurd continued, adding that "lawmakers must fulfill our oversight duty" to keep the "American people informed of the current danger" posed by Trump and his unending submission to Russia.

"Russia is our adversary," Hurd added, noting that Russia's history of meddling in elections throughout the world, propping up dictators, and invading "sovereign nations" such as Ukraine, "all to the detriment of United States interests."

"Mitt Romney had it right in 2012 when he told President Barack Obama that Russia was 'without question our No. 1 geopolitical foe,'" Hurd wrote.

The American intelligence community has concluded and continued to warn of Russian efforts to "sow chaos in our electoral system," he said. "Russia’s efforts to hack political organizations and state election boards are well documented, as are the Russian disinformation campaigns on social media platforms."

@nytopinion Thank you for serving our country and speaking out for the United States of America. Putting country ov… https://t.co/qZpzjkHOvu
— SjWinsome🍑 (@SjWinsome🍑) 1532106680.0

This has resulted in "Russian disinformation spreading like a virus throughout the Western world," such as the 2016 Brexit referendum which broke Great Britain from the European Union and Russian backing of right-wing nationalist candidates in France and Montenegro.

These actions, Hurd wrote, are intended to shatter the world order established after World War II that was put in place to prevent another global conflict.

Hurd called on Congress to strengthen the capabilities of American intelligence operations and to "take the lead on European security issues as it has in recent years," like when Congress sent weapons to Ukraine to help the country fight off Russian aggression in 2014, which resulted in the annexation of Crimea.

Hurd mentioned the passage of the Countering America’s Adversaries Through Sanctions Act which imposed strict sanctions on Russia for its role in interfering in the 2016 election, as well as the Ukraine Cybersecurity Cooperation Act, giving Ukraine more power to combat Russian propaganda.

@nytopinion Thank you @HurdOnTheHill for putting your country over your party. To get through this we all need to b… https://t.co/mfnwmC2tmv
— TraceyfromVa (@TraceyfromVa) 1532057886.0

Hurd also said he supports the effort of the Senate Foreign Relations Committee to get Secretary of State Mike Pompeo to testify on what he knows about the meetings Trump held with Putin and North Korean dictator Kim Jong Un, both of which took place behind closed doors with only translators present.

The Intelligence Authorization Act "authorizes funding to support critical national security programs across the intelligence community," Hurd said, urging lawmakers to send it to the president's desk as soon as possible.

As a member of the House Oversight and Government Reform Committee, I strongly believe in the importance of Congress’s oversight responsibilities and will work with my colleagues to ensure that the administration is taking the Russian threat seriously.

Without action, we risk losing further credibility in international negotiations with both our friends and foes on critical trade deals, military alliances and nuclear arms.

Hurd did not, however, broach the topic of impeachment, which has permeated Democratic circles as far back as Trump's inauguration last year. We've since learned Trump was briefed on Russian election interference in the weeks before taking office, the evidence for which he "grudgingly" accepted. Still, this hasn't stopped the president from undermining American efforts to stop further attacks on our democracy.

His habitual chastizing of Special Counsel Robert Mueller's investigation into Russian efforts to disrupt our elections as a "rigged witch hunt."

Hurd closes his piece by saying: "I hope the president shares my conviction that American strength, not weakness, is the best way to preserve a secure world in the face of adversaries like Russia."