In Bonkers Video, Roy Moore Explains Why He Won't Concede the Senate Race He Lost 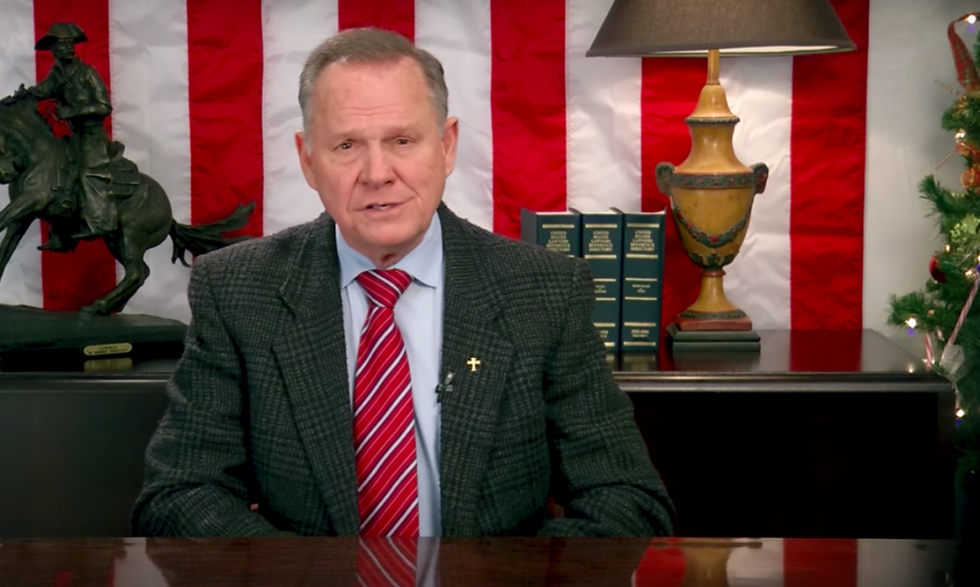 Roy Moore, in the latest video from his campaign, refuses to concede the Alabama Senate Race to Doug Jones, his Democrat opponent. (Screenshot via Youtube)

Roy Moore has issued a new statement refusing to concede the Alabama special Senate election until completion of the final count. In a video address posted online, Moore explained that the race between him and Doug Jones, his Democrat opponent, remained close, and cited the importance of counting all military and provisional votes.

But the video he released isn't your typical post-election statement: Moore uses his four-minute address to admonish all he considers immoral, including abortion, same-sex marriage, sodomy, and the expanding secularism in American society.

"We are indeed in a struggle to preserve our republic, our civilization, and our religion and to set free a suffering humanity," he said. “Today, we no longer recognize the universal truth that God is the author of our life and liberty. Abortion, sodomy and materialism have taken the place of life, liberty and the pursuit of happiness.”

We have stopped prayer in our schools. We have killed over 60 million of our unborn children. We have redefined marriage and destroyed the basis of family, which is the building block of our country. Our borders are not secure. Our economy is faltering under an enormous national debt. We have a huge drug problem. We have even begun to recognize the right of a man to claim to be a woman, and vice versa. We have allowed Judges and justices to rule over our Constitution, and we have become slaves to their tyranny. Immorality sweeps over our land.

Moore further characterizes the election as a battle of warring ideologies, one in which “the heart and soul of our country" are at stake. “In this race,” he said, “we have not received the final count to include military and provisional ballots. “This has been a very close race, and we are awaiting certification by the secretary of state.”

Alabama Secretary of State John Merrill has said it's "highly unlikely" Jones will not be certified the winner, despite calls from Moore's campaign manager for a recount, which is mandated by state law if the final margin of victory is within half a percentage point. The margin between the final votes was larger than the required 0.5 percentage point for an automatic recount, however.

Speaking on Today two days after his surprise win, Jones said he is "confident" he won Tuesday night's election and urged Moore to "move on."

"I understand the frustration a little bit. It is a close race," Jones said. "It's time to move on. Every race is tough. It's bitter sometimes. I think this one was one that people in Alabama have now spoke and they decided to heal. I think [Moore] would do well to go ahead and let's get this behind us so that the people of Alabama can get someone in there to start working for them."

Jones added he and his team have no doubt he won the election. "We've looked at these numbers. We feel very confident in the outcome of this race," he said.

Jones' win was a surprise upset in a race which took a dramatic turn after nine women came forward accusing Moore of sexual misconduct. Several of them alleged they were as young as 14 when Moore, then in his 30s, pressured them into sex. Despite the scandal, political pundits and voters alike assumed victory would undoubtedly be Moore's. (Moore still managed to claim 48 percent of the vote, though he would lose to a coalition of black voters––namely black females––in Alabama who ensured Jones' victory.

Moore has denied the sexual misconduct allegations. He briefly mentioned them in his video address, telling his supporters that "our political process has been affected with baseless and false allegations."

“Even our political process has been affected with baseless and false allegations, which have become more relevant than the issues which affect our country,” Moore said. “This election was tainted by over $50 million dollars from outside groups who want to retain power and their corrupt ideology.”