Using his platform to speak truth to power. 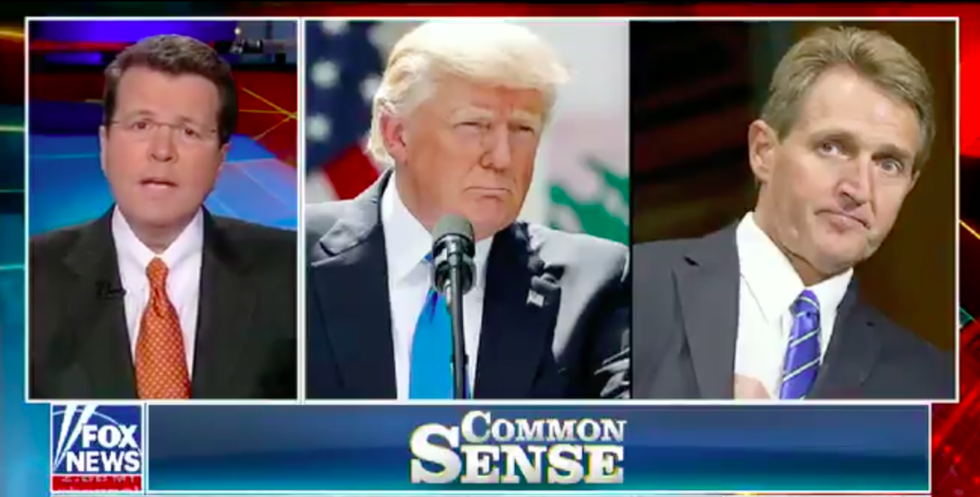 Fox News has enjoyed a rather cushy position as the de facto network of choice for President Donald Trump and his supporters, but now yet another high profile reporter at the media outlet has spoken out against him.

Fox News host Neil Cavuto took aim at the president in a blistering on-air rant yesterday, admonishing him for his recent tweets.

Over the weekend, Trump lashed out at LaVar Ball, the father of one of three basketball players jailed in China on shoplifting charges. Trump said he should not have orchestrated the players' release––"I should have left them in jail!"–– after Ball downplayed his role in the matter.

Trump had also attacked Senator Jeff Flake (R-AZ), suggesting that his political career was "toast." Last month, Flake called the president's conduct “dangerous to our democracy” and urged his fellow legislators to denounce the president’s behavior during an emotional speech on the Senate floor in which he announced his decision not to seek re-election.

The president's highly public outbursts prompted Cavuto to speak out. “Forget about either comment not being presidential,” he said. “At what point does the president see such remarks don’t even border on being human?” He added that Trump’s attacks are like “using a bazooka to respond to a pea shooter.”

"Let your achievements speak for themselves," he said. "Let your clear influence to get those players out of China speak for you. Not a kid's dad who just might be embarrassed, but that kid and his buddies who already told the nation and you they were grateful."

He continued: “Last time I checked, you are the president of the United States,” he said. “Why don’t you act like it?”

The responses to Cavuto's commentary were rather mixed.

"Neil, quit criticizing and belittling the President. You are a journalist not a partisan commentator. Wake up!" wrote one Twitter user.

Another: "Not very common [sense] and who are you to to tell the president what he should do. We all know he’s a counter puncher learn to live with it."

And yet another: "Your president is a white supremacist, a religious bigot & a sexual predator. it's disingenuous in the extreme to pretend he's only a sensitive bully. He doesn't like when women and PoC don't grovel before him. He's a disgusting disgrace to this nation. Every minute of every day."

@TeamCavuto Neil, quit criticizing and belittling the President. You are a journalist not a partisan commentator. Wake up!
— Pamela Wilkes (@Pamela Wilkes) 1511217259.0

This isn't the first time Cavuto has criticized the president. Last month, he scolded the president for his continued attacks on members of the Republican Party, saying Trump "is running out of friends."