Kellyanne Conway Was Asked About Her Husband's Anti-Trump Tweets, It Did Not Go Well 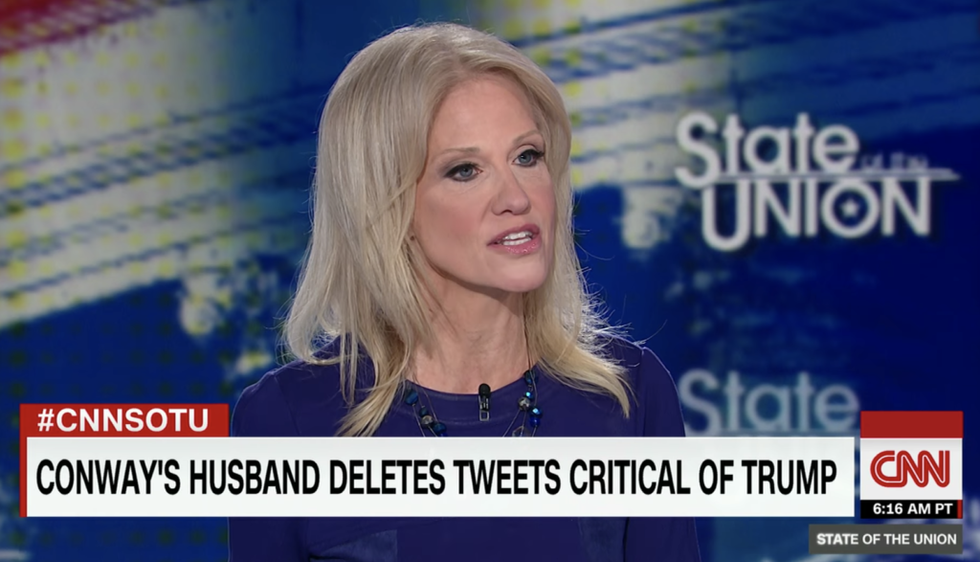 During an appearance on CNN's State of the Union, Dana Bash asked Kellyanne Conway a seemingly innocuous question:

"What is up with your husband's tweets? Your husband is a very well-respected lawyer and he's been sending tweets very critical of the administration."

CONWAY: "It's fascinating to me that CNN would go there but it's very good for the whole world to have just witnessed that it's now fair game how people's spouses or significant others would differ with them. I'm really surprised but in some ways relieved and gratified to see that, this should be fun."

BASH: "First of all I would ask you that if you were a man."

BASH: "It's about publicly questioning what you are doing for a living with regard to your boss. It has nothing to do with your gender."

CONWAY: "This ought to be fun moving forward, Dana. Are we going to do that? You just went there, CNN just went there...It was meant to harrass and embarrass."

BASH: "It absolutely was not."

CONWAY: "By definition, spouses have a difference of opinion...this is a fascinating cross the Rubicon moment."

BASH: "You are a professional working for the President of the United States. When their spouse is saying critical things about them."

You can watch the exchange below (begins 9:52 in):

FULL clip from @CNNSotu with @DanaBashCNN. (5 mins in) I say double standard against me has nothing to do w gende… https://t.co/RK2KLCNKKH
— Kellyanne Conway (@Kellyanne Conway) 1524419561.0

So Kellyanne Conway obviously did not appreciate you asking about her husband’s tweets. Why do you think that hit such a nerve with her?

I have no idea. I really don’t. I obviously can’t read her mind. But it was probably obvious from my reaction that I was surprised by the way that she responded. I still kind of am. But I really don’t know why, because I thought then and I think now that it was a completely legitimate question that can and should be asked to somebody who is the counselor to the president out there defending and explaining his positions and what goes on inside the White House. Her husband, who is a prominent Republican lawyer pretty regularly retweets or tweets criticism of the administration in which she works. I thought it was a legitimate question and I still do.

But is Kellyanne Conway's refusal to speak about the subject really the last word? Not on Twitter.

Conway may not want to address the issue, but the Twittersphere has long been monitoring George Conway's activity and many had something to say on her refusal to discuss the subject.

As expected, some people really went in on the Trump spokesperson.

Some stories have a clear hero who has to overcome insults , lies and personal attacks- this is one of them.… https://t.co/b6Mifl6ZDm
— Nicolle Wallace (@Nicolle Wallace) 1524418656.0

Saw it live. @DanaBashCNN ‘s poise in face of Kellyanne’s Orwellian drivel was heroic. Chief enabler of a man who b… https://t.co/2BoDtTIOXX
— Bradley Whitford (@Bradley Whitford) 1524430174.0

I am afraid Dana Bash is not able to keep up with the perfected lying-machine that is Kellyanne Conway! Why give t… https://t.co/ARfXYvaP93
— Gail Mackinson (@Gail Mackinson) 1524402778.0