They have only one viewer that matters. 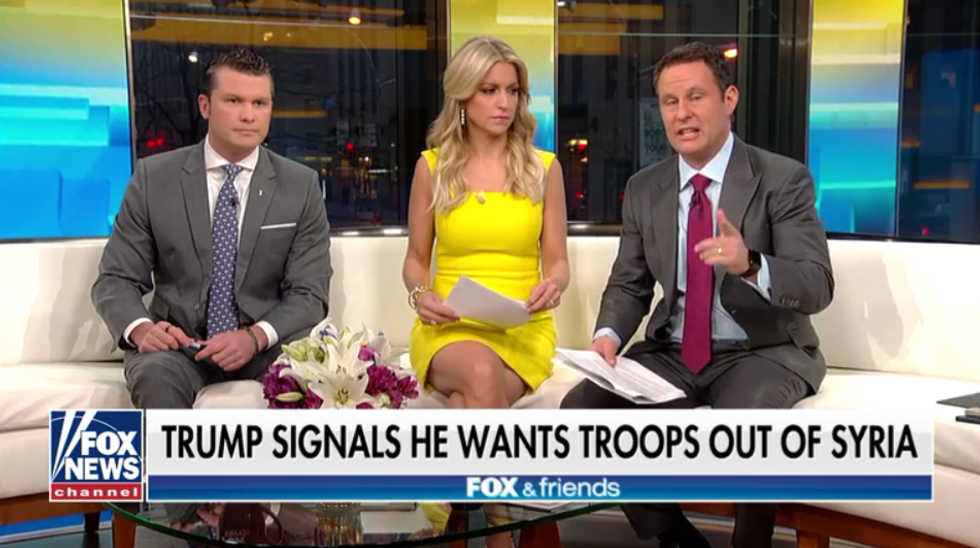 We'll be coming out of Syria, like, very soon. Let the other people take care of it now.”

The president reiterated his plans on Tuesday.

I want to get out. I want to bring our troops back home. I want to start rebuilding our nation.”

Trump added the United States gets “nothing — nothing — except death and destruction” out of military spending in the Middle East. “It's a horrible thing.”

But the folks at Fox did not agree with the president's intentions to pull out of Syria and told him as such on their programs in a series of interviews and commentary.

Wednesday morning saw the hosts on Fox & Friends advising against a troop pull out, calling the idea a "disaster".

“I was really disturbed when the president said this last week,” host Brian Kilmeade said.

“If you pull out of Syria too quickly, you create a vacuum,” host Pete Hegseth added.

ISIS — the caliphate has been defeated, but they've all fled into Turkey. Islamist Turkey. And they're still involved. You've got the Kurdish allies still not ready to stand up by themselves. And you've got Iran wanting to take over that entire vacuum and wanting to build a land bridge to our friends in Israel.”

“I think the president is too smart,” Kilmeade interjected. “He knows what happened when President Obama took his troops out of Iraq. ... Man, it was a dumb move for him to do that. Look, it created ISIS.”

Kilmeade added that Trump “wants Saudi Arabia to pay for our 2,000 troops [in Syria]. I'm fine with that because we are doing their work. But there is not a person around the president, I believe, that would support him pulling out the troops. It would be a disaster.”

“This could be a negotiation,” Hegseth offered.

“I hope it's a negotiation,” Kilmeade replied. “It would be a disaster.”

And it appears that the president listened.

Wednesday the White House released a statement committing US troops to continuing to fight the Islamic State in Syria.

“The military mission to eradicate ISIS in Syria is coming to a rapid end, with ISIS being almost completely destroyed,” Sarah Huckabee Sanders announced.

“The United States and our partners remain committed to eliminating the small ISIS presence in Syria that our forces have not already eradicated.”

The rapid turn around raised more than a few eyebrows. Just the day before, the president said the opposite.

“I want to get out — I want to bring our troops back home,” Mr. Trump said on Tuesday during a news conference. “It’s time. We were very successful against ISIS.”

The move fueled ongoing speculation that Fox News has undue influence over the president.

@CNNPolitics Trump has totally confused Our Soldiers in Syria. Trump mouths off info WITH OUT consulting with Milit… https://t.co/lxanrU9IQw
— Sage (@Sage) 1522863776.0

Trump contradicts his secretary of defense and declares ISIS defeated in Syria and time for US to "get out". https://t.co/LRUiI9oirY
— TrumpLog (@TrumpLog) 1522873397.0