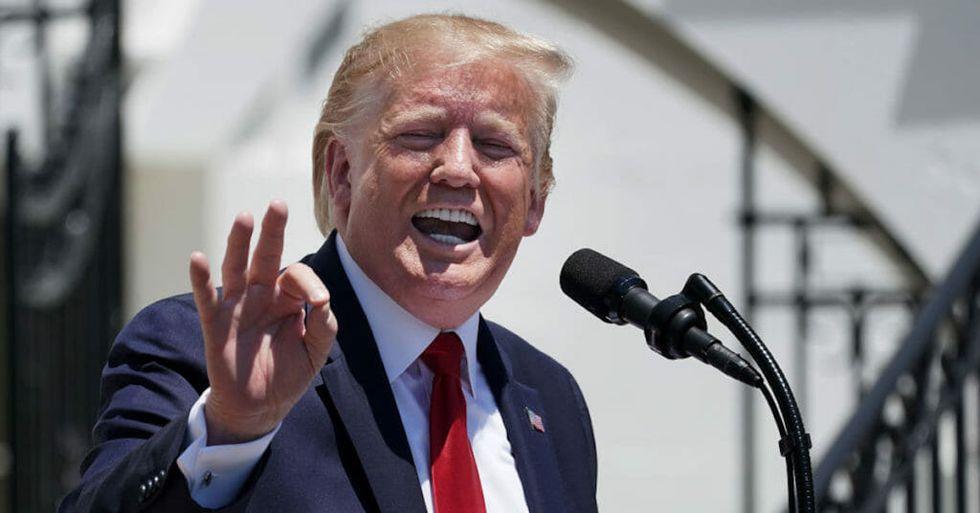 President Donald Trump takes questions from reporters at the White House July 15, 2019 in Washington, DC, one day after Tweeting that four Democratic congresswomen of color should "go back" to their own countries. (Photo by Chip Somodevilla/Getty Images)

In an article that began with a laundry list of how other news media—both print and visual—handled a racist tweet storm from President Donald Trump on Sunday, The Washington Post announced their decision to no longer tread lightly around the President's tweet that quoted White nationalism and White supremacist talking points.

The Washington Post acknowledged they like the other organizations they highlighted at the beginning of their article "initially avoided any direct characterization of the tweets, sticking to the reaction of others" in their early Monday coverage. But they added "later in the day, [The Post] began using the direct, unvarnished label."

"The Post traditionally has been cautious in the terminology it uses to characterize individuals’ statements, because a news organization’s job is to inform its readers as dispassionately as possible."

"Decisions about the terminology we use are made only after a thorough discussion among senior editors. We had that discussion today about President Trump’s use of a longstanding slur against African Americans and other minorities."

"The ‘go back’ trope is deeply rooted in the history of racism in the United States. Therefore, we have concluded that ‘racist’ is the proper term to apply to the language he used Sunday."

While many praised The Post's decision, it wasn't a fix-all.

The Post pointed out their fellow news organizations' attempts to report on Trump telling four United States citizens—all women of color—that the countries they came from were lawless and without functioning governments and the Congresswomen should go back where they came from before criticizing the USA.

Most news media either used couched language or attributed the charge of racism against the President of the United States to others. The Post quoted Arizona State journalism professor Dan Gillmor to explain why that is a problem they needed to address.

Gillmor called it "weasel wording" when the media tries to avoid calling Trump's lies lies and his racism racism.

"My favorite [weasel wording], in a grind-your-teeth sense, is ‘racially tinged'."

"It demonstrates journalistic weakness at a time when we need news organizations to be undaunted by the escalating attacks on the craft."

The Washington Post wrote in their article that while those reading or watching the reports of Trump's racist tweet are going to understand the implication, it's important to call things what they are.

"It’s unlikely that readers or viewers will miss the implications of news reports that refer to such controversies obliquely...But the issue may be credibility and trust: Many people, particularly people of color, have long harbored the suspicion that the news media underplay stories about race and racism."

As pointed out by The Post, people of color immediately recognized the implications of Trump's statements, having heard it throughout their lives.

Even Native Americans, with a less than White complexion are told to "go back" to their own country when mistaken for people of another race.

While there is humor in a group of White nationalist protestors referring to themselves as patriots telling a Navajo state representative in Arizona to "go back" to his own country because they assumed he was Latinx, the idea is rooted in racism which is not funny.

The Post recognized most media have no official policy on when to label racism as racist or lies as lies, but they acknowledged the Associated Press used no couched language in their own coverage. One AP headline read:

"'Many people agree with me': Trump digs in on racist tweets."

"President Trump, unbowed by criticism of his racist tweets targeting Democratic congresswomen, says 'If you’re not happy here, then you can leave'."

However President Trump has expanded on his racist tweets, demanding an apology from the four Congresswomen of color he targeted. Meanwhile his 2020 campaign staff, Vice President and allies in Congress try to spin his racist tweets to be something other than what they are: racist rhetoric from White nationalists.

If you want to learn more about racism and the White supremacy movement in the United States, there are several books available.

The book Rising Out of Hatred: The Awakening of a Former White Nationalist is available here.

To understand why talking about and even acknowledging racism is difficult for many people, the critically acclaimed book White Fragility: Why It's So Hard for White People to Talk About Racism is available here.

And if you want a definitive history of the rise of White supremacy and White nationalism, the book White Rage: The Unspoken Truth of Our Racial Divide, is available here.