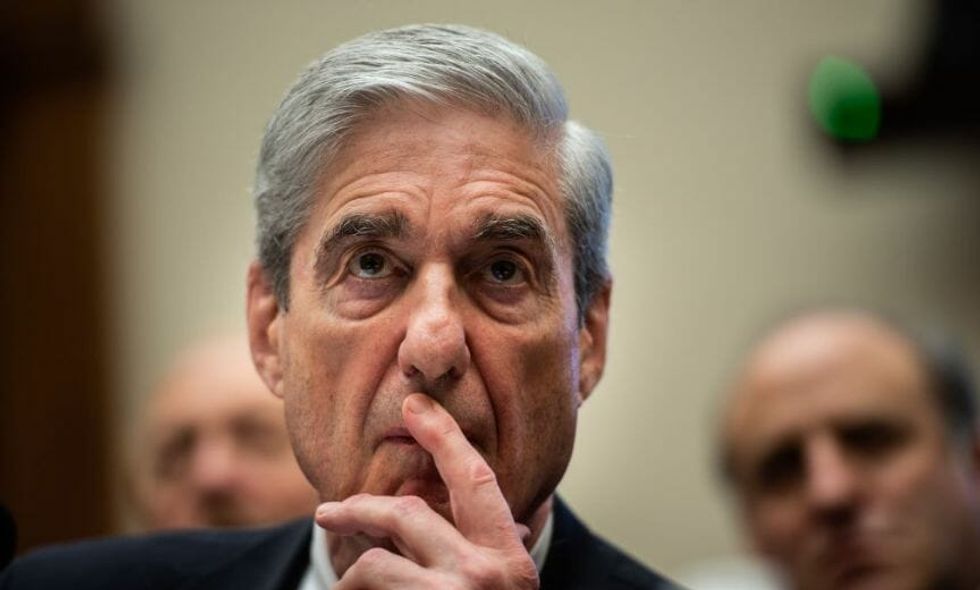 Former special counsel Robert Mueller's testimony before the House Judiciary and Intelligence committees on Wednesday clocked in at around seven hours. Representatives questioned him about his 400+ page report on Russian interference in the 2016 presidential election and President Donald Trump's numerous efforts to obstruct the investigation.

Though the hearings were lengthy, a new op-ed Washington Post writers Greg Sargent and Paul Waldman highlights two exchanges summarizing the most damning revelations featured in the report.

Schiff: During the course of this Russian interference in the election, the Russians made outreach to the Trump campaign, did they not?

Schiff: The campaign welcomed the Russian help, did they not?

Mueller: We report indications that that occurred, yes. [. . .]

Schiff: The president himself called on the Russians to hack [Hillary Clinton’s] emails?

Mueller: There was a statement by the president on those general lines."

Watch the full exchange below:

"This confirms the basic outlines of what this scandal has been about all along," the piece states. "The president and his advisers eagerly expected to gain from a massive foreign attack against our political system — one undertaken to elect Trump in 2016."

The piece highlights another interaction from Mueller's testimony before the House Judiciary Committee, in which Mueller confirms for Chairman Jerry Nadler (D-NY) that the report by no means exonerates the President regarding obstruction of justice.

Nadler: Now, in fact, your report expressly states that it does not exonerate the president.

Nadler: And your investigation actually found, quote, “multiple acts by the president that were capable of exerting undue influence over law enforcement investigations, including the Russian interference and obstruction investigations.” Is that correct?

Nadler: Now, Director Mueller, can you explain in plain terms what that finding means so the American people can understand it?

Mueller: Well, the finding indicates that the president was not exculpated for the acts that he allegedly committed."

This moment directly contradicts Trump's repeated claims that the report exonerates him.

Sargent and Waldman don't hold back in what this means:

But it didn't take seasoned political commentators for Americans to see through Trump's lies.

@ThePlumLineGS Please tell this to a large part of the media who are more focused on the performance than what actually came out of it.
— Ezra (@Ezra) 1564057744.0