The White House Just Held Its 'Made In America Day' Event, and People Are Trolling Donald Trump for Exactly the Reason You Think 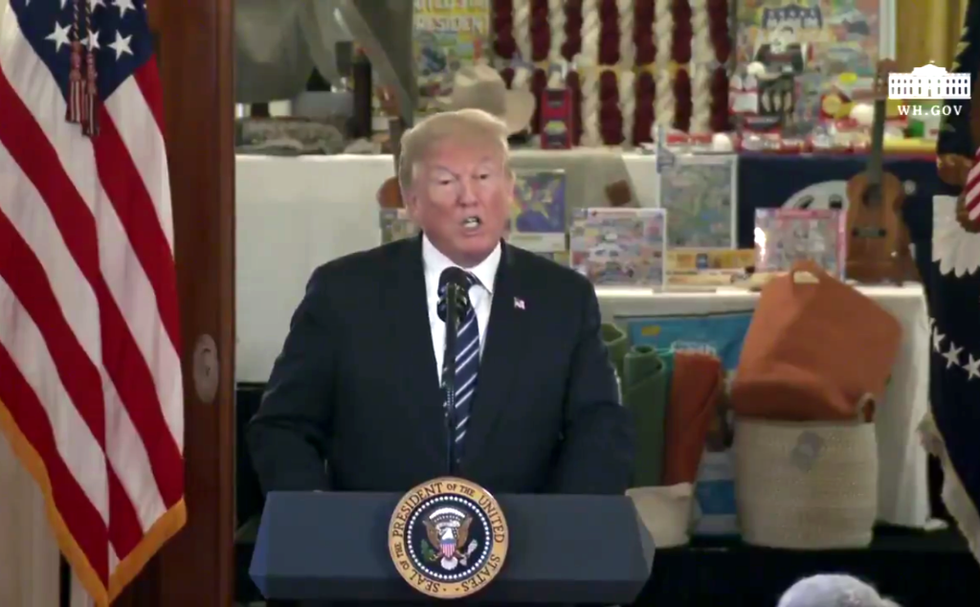 President Donald Trump stands before a display of products Made in America during an event of the same name at the White House July 23, 2018 (White House video)

The official White House Twitter account posted a video Monday of President Donald Trump speaking at the Made in America event being held at the White House. In the tweet, they included the hashtag #MadeinAmerica.

"American manufacturers gathered at the White House today to showcase American-made goods from all 50 states. #MadeinAmerica," the tweet reads.

The short video clip showed the President before a display of products from each of the 50 states all "Made in America."

However the internet being what it is, people seized upon the hashtag to make a point to the Trump Organization —the private businesses owned by the family— and the Trump presidential administration.

People shared photos of Trump brand merchandise labels, showing the goods were not #MadeinAmerica. Instead of kudos, people trolled the First Family accusing them of hypocrisy.

Everything from golf shirts...

...to the hats synonymous with the President were shared with the hashtag #MadeinAmerica.

After considerable criticism, official MAGA logo hats sold on the President's campaign website are now made in the United States according to fact checking organization Politifact, but people online claim free hats given away at rallies are still made in China.

Other members of the Trump family received negative feedback for their branded products as well, most notably First Daughter Ivanka Trump. Tweets and images called her out for her products manufactured overseas.

@GOP @realDonaldTrump What about @IvankaTrump @IvankaTrumpHQ stolen clothing designs and her clunky shoes that are made in China?
— RJ (@RJ) 1532381113.0

@WhiteHouse Conspicuously absent from #MadeInAmerica is Ivanka Trump, since her stuff is all made in China! Tone deaf & shameful!
— Mona Soliman (@Mona Soliman) 1532377140.0

@realdonaldtrump had a #MadeinAmerica event today, sans ANY products from Trump or @IvankaTrump b/c they have their… https://t.co/ikUTQyRvyt
— grey-sister (@grey-sister) 1532381798.0

@GOP @realDonaldTrump Look at what is not Made in America and exempt from tariffs! #Hypocrite https://t.co/R0vKBmUMJG
— Lisa Amaral (@Lisa Amaral) 1532381126.0

The hats given to Republican members of Congress during the Trump inauguration also bore made in China labels. Photos of those special black hats also made it back onto Twitter in celebration of Monday's White House #MadeinAmerica event.

Late night comedian Jimmy Kimmel also took the Trump family to task back in March for the lack of products made in America in the Trump online store.