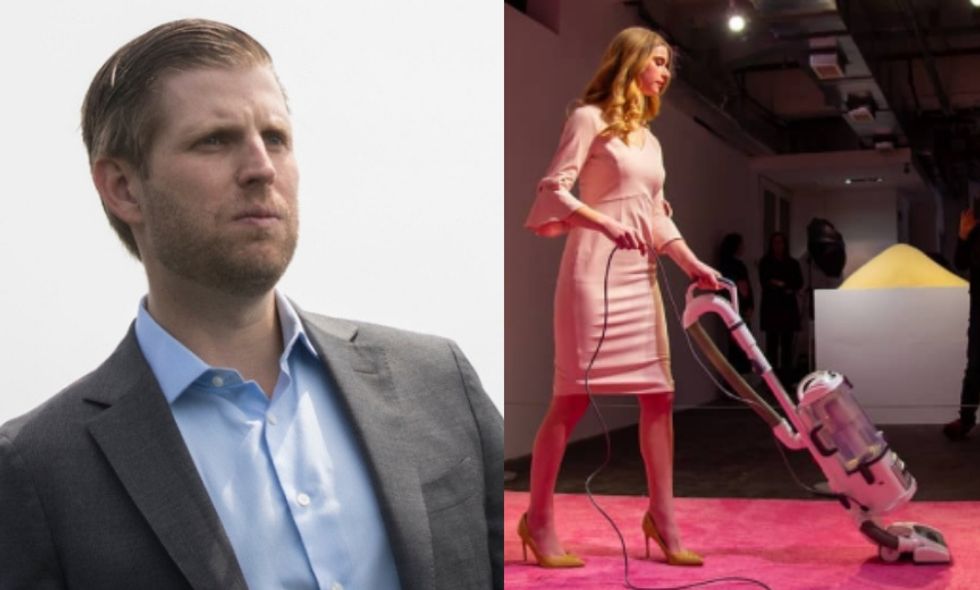 A Washington D.C. museum is showcasing a controversial exhibit featuring an Ivanka Trump lookalike, and Eric Trump is not happy about it.

Spectators are encouraged to throw crumbs on the pink carpet for Fakevanka to suction up, which the exhibit's designer, Jennifer Rubell, stresses is a metaphor for how the public views Ms. Trump.

"Here is what’s complicated: we enjoy throwing the crumbs for Ivanka to vacuum,” Rubell said in a statement. “That is the icky truth at the center of the work. It’s funny, it’s pleasurable, it makes us feel powerful, and we want to do it more.”

The exhibit is not sitting well with the First Family.

President Donald Trump's middle son said on Fox & Friends Tuesday morning that his sister "has done more for women" than anyone else in D.C.

There really is nothing quite like a Trumpian hyperbole.

"These leftists called up a modeling agency, saying, 'You know what, I want to get a nice woman to come stand on a carpet, with a vacuum of all things, so that our people can throw food and crumbs to mimic a powerful woman who has done more for women than probably anyone in Washington, D.C.," E. Trump said.

"Think about that hypocrisy," he said. "They label themselves the quote, unquote 'party of women,' yet they're throwing food, they're throwing garbage at a woman on a carpet holding a vacuum cleaner to mimic someone who really does care and who has fought so hard for women."

Unfortunately for the Trumps, Twitter sees things quite differently.

The exhibit is not intended to be offensive, however. The concept, though unusual, is an attempt to represent the struggle between women's empowerment and traditional gender roles.

“Inspired by a figure whose public persona incorporates an almost comically wide range of feminine identities—daughter, wife, mother, sister, model, working woman, blonde— ‘Ivanka Vacuuming’ is simultaneously a visual celebration of a contemporary feminine icon; a portrait of our own relationship to that figure; and a questioning of our complicity in her role-playing,” a press release for the exhibit states.

The exhibit “is not a stand-in for one feeling, one relationship or one point of view toward this powerful and sexualized female form," the release says. Rather, it is “intentionally open to multiple, often contradictory interpretations that are critical of the interpreter as they are of the subject.”

Nevertheless, Ms. Trump also blasted the performance art in a tweet, accusing it of being harmful to women.

"Women can choose to knock each other down or build each other up," she wrote. "I choose the latter."

People had questions, specifically, what has Ms. Trump done to help women since going to work at the White House?

@thehill I literally have no idea what she's actually accomplished since being in the WH.
— DailyMusings (@DailyMusings) 1549390270.0

@IvankaTrump Do you? Where were you during the Kavanaugh hearings? Or when it comes to mothers having kids ripped f… https://t.co/LqgW9X5BnV
— Brad Wollack (@Brad Wollack) 1549381675.0

@atrupar He chides the left for not pulling themselves up their own bootstraps and he's been reared from the crib w… https://t.co/40ncPAYx1l
— moneybaggsyo ✈️ (@moneybaggsyo ✈️) 1549373164.0

Ms. Trump's perceived complicity in her father's cruel policies toward immigrants has soured her public image.

Mothers to mother, where are the kids?

@IvankaTrump Your father has taken babies away from their mamas and purposely orphaned them- those mamas happen to… https://t.co/SLGLtqCH8o
— Stephy (@Stephy) 1549386046.0

@IvankaTrump Reunite the children being held in detention camps (or with surrogate guardians) with their parents an… https://t.co/vPCyi0xwWI
— Megatron (@Megatron) 1549387949.0

@IvankaTrump You are in service to a man who has done more to hurt the interests of women than ANY president in rec… https://t.co/qEoREw2qzf
— Justin Hendrix (@Justin Hendrix) 1549379647.0

The exhibit runs through February 17.