Donald Trump Just Claimed That He Didn't Fire James Comey Because of Russia, But the Internet Has the Receipts 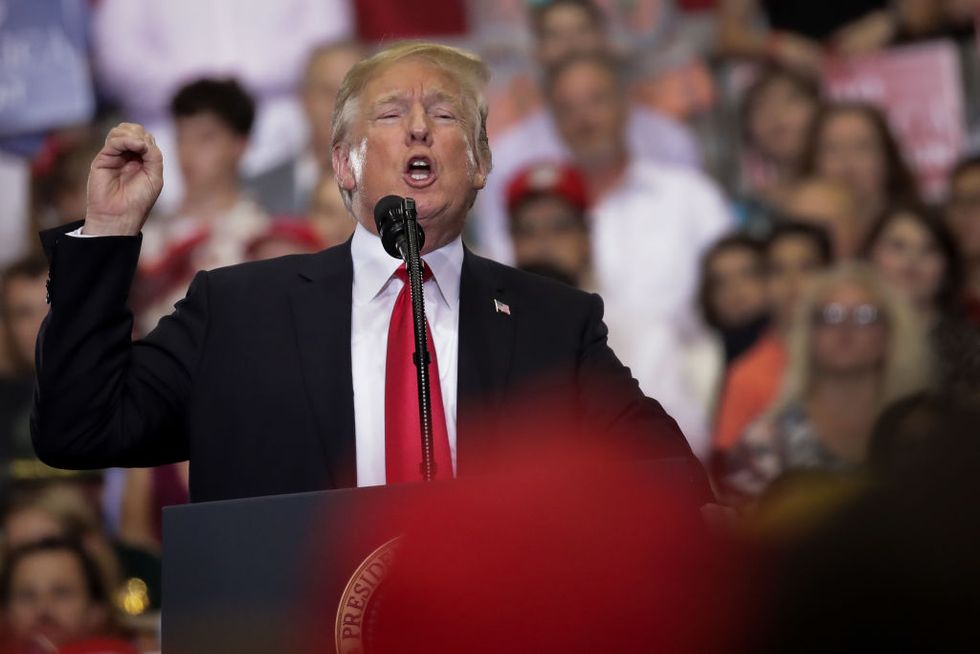 NASHVILLE, TN - MAY 29: U.S. President Donald Trump speaks during a rally at the Nashville Municipal Auditorium, May 29, 2018 in Nashville, Tennessee. Earlier in the day, President Trump held a fundraising event in support of Rep. Marsha Blackburn (R-TN), who is running for a U.S. Senate seat against former two-term Tennessee Gov. Phil Bredesen, a Democrat. They are competing for the Senate seat currently held by Sen. Bob Corker (R-TN), who declined to run for a third term. Recent polling indicates a close race between Blackburn and Bredesen. (Photo by Drew Angerer/Getty Images)

President Donald Trump rehashed one of his favorite talking points earlier this morning, claiming that he never fired James Comey, the former FBI Director, because of the agency's investigation into Russian interference. The president also slammed members of the media for propagating a narrative he says is false.

"Not that it matters but I never fired James Comey because of Russia! The Corrupt Mainstream Media loves to keep pushing that narrative, but they know it is not true!" the president wrote.

But there's video evidence of the president claiming otherwise, as a clip shared by Senator Charles "Chuck" Schumer (D-NY) demonstrates.

"But regardless of recommendation, I was going to fire Comey knowing there was no good time to do it," Trump says in the clip from an interview he gave to NBC News several days ago. "And, in fact, when I decided to do it, I said to myself, I said, 'You know, this Russia thing, with Trump and Russia, is a made-up story, it's an excuse.'"

MSNBC also shared the clip, noting that the president's tweet contradicts what he told interviewer Lester Holt during his televised appearance.

New York Times television critic James Poniewazik also weighed in, saying, "You should have a word with the guy who was saying it on NBC."

The president's outburst comes amid a report that Andrew McCabe, the former acting FBI director, wrote a confidential memo last spring documenting a conversation he had at the Justice Department with the deputy attorney general, Rod J. Rosenstein. Rosenstein, notes The New York Times, "played a key role" in Comey's dismissal, "writing a memo that rebuked Mr. Comey over his handling of an investigation into Hillary Clinton." Rosenstein also revealed that the president had asked him to reference Russia in his memo, although he did not elaborate on what Trump wanted him to say.

To McCabe, the Times report continues, "that seemed like possible evidence that Mr. Comey’s firing was actually related to the F.B.I.’s investigation into the Trump campaign’s ties to Russia, and that Mr. Rosenstein helped provide a cover story by writing about the Clinton investigation."

This is only the latest example of the president contradicting himself so publicly, and one need only scroll through Trump's Twitter feed to find other instances of him assailing Comey for his hand in the Russia probe, now led by Special Counsel Robert Mueller, himself a frequent target of the president's attacks.

Trump lashed out at the former FBI director on Twitter last month over memos written by Comey that detail a series of phone calls and encounters between the two men in the months leading up to Comey’s termination.

James Comey Memos just out and show clearly that there was NO COLLUSION and NO OBSTRUCTION," the president wrote at the time. "Also, he leaked classified information. WOW! Will the Witch Hunt continue?"

James Comey Memos just out and show clearly that there was NO COLLUSION and NO OBSTRUCTION. Also, he leaked classif… https://t.co/YfMYBrTkza
— Donald J. Trump (@Donald J. Trump) 1524195446.0

The declassified memos––15 pages in total, which you can read HERE––were sent to Congress from the Justice Department on April 19, at the urging of top Congressional Republicans who felt the memos would benefit Trump’s case in the Mueller probe.

The three Republicans––Representative Robert W. Goodlatte, Chairman of the Judiciary Committee, Representative Devin Nunes of the Intelligence Committee, and Representative Trey Gowdy of the Oversight Committee––believe the memos prove the president wanted an investigation, and, as they made clear in a statement:

We have long argued former Director Comey’s self-styled memos should be in the public domain, subject to any classification redactions. These memos are significant for both what is in them and what is not.

Former Director Comey’s memos show the President made clear he wanted allegations of collusion, coordination, and conspiracy between his campaign and Russia fully investigated. The memos also made clear the ‘cloud’ President Trump wanted lifted was not the Russian interference in the 2016 election cloud, rather it was the salacious, unsubstantiated allegations related to personal conduct leveled in the dossier.

The memos also show former Director Comey never wrote that he felt obstructed or threatened. While former Director Comey went to great lengths to set dining room scenes, discuss height requirements, describe the multiple times he felt complimented, and myriad other extraneous facts, he never once mentioned the most relevant fact of all, which was whether he felt obstructed in his investigation.

Representative Elijah Cummings (D-MD) soon countered that statement, expressing his belief that the president's "interference was a blatant effort to deny justice, and director Comey was right to document it as it happened in real time.”

The president fired Comey on May 9, 2017, an action which, many legal experts say, constitutes grounds for an investigation of Trump for possible obstruction of justice. A New York Times report the following Monday revealed that Trump asked Comey to halt the criminal investigation into Michael Flynn, his former national security advisor. (Flynn would later plead guilty to lying to federal investigators about his conversations with Sergey Kislyak, the former Russian ambassador to the United States.)

The release of the memos––which came the same week as the release of Comey’s book, A Higher Loyalty: Truth, Lies & Leadership, an account that paints an unflattering picture of the president and his administration––has appeared to push limits for a president many already see as overly combative.