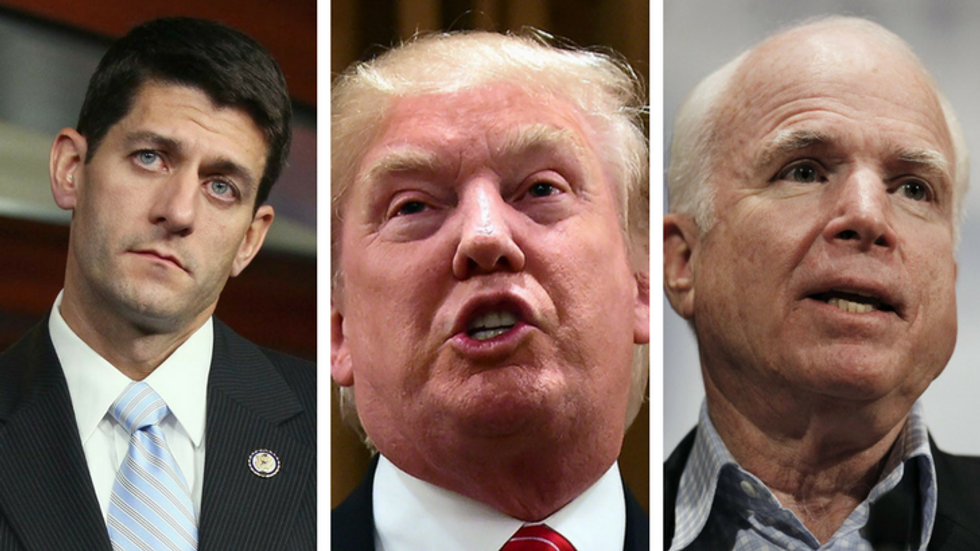 Donald Trump's public break with GOP leaders and nosedive in the polls since the first presidential debate and the release of a 2005 tape containing his lewd comments and boasts about sexual assault have Democratic strategists openly considering going after two historically red GOP strongholds--Georgia and Arizona. Supporters have begun urging Hillary Clinton to move aggressively on Congressional races to try and take back not just the Senate but the House of Representatives.

Trump Assails His Own Party’s Leadership

On Tuesday, Trump deepened the crisis within the GOP when he went on another signature Twitter rant about Republican defectors from his campaign. He declared himself a liberated man: “The shackles have been taken off me,” he wrote.

The very foul mouthed Sen. John McCain begged for my support during his primary (I gave, he won), then dropped me over locker room remarks!
— Donald J. Trump (@Donald J. Trump) 1476204748.0

He also gave an interview Tuesday night blasting Ryan and McCain for abandoning him and saying he neither wanted nor needed Ryan’s support.

The escalating war between Trump and Republican leaders is a sign that Republicans will need to work long and hard to repair fractures within the party. Meanwhile, Trump has continued to rile up his supporters with his withering criticisms of those who have defected from his campaign. Rather than tone down his rhetoric, his attacks seem to grow in intensity the closer the election looms. He reiterated his claim, for example, that he would hire a “special prosecutor” to investigate Clinton should he become president.

The Fallout Could Flip Congress and Transform the Electoral Map

GOP strategists are very concerned that, should Trump continue to blast the Republican Party, his base could reject outright the established GOP candidates who abandoned him. GOP insiders fear voters will punish the party, with anti-Trump Republicans choosing to stay home while Trump’s base casts ballots for Trump alone and against incumbent GOP members. Even a few percentage points could mean loss of control over Congress. The GOP has not figured out a way to rein Trump in as he implodes not only his own chances but the party’s in general. The party’s main donors have little control over Trump, for example, because he relies largely on small donors and his own wealth to continue.

This dynamic could poison Republican chances in swing states already in heated races for the House and Senate, where the party’s candidates must choose between estranging themselves from their party base or standing behind a nominee whom most mainstream voters cannot accept. The party could lose Senate races in Pennsylvania and North Carolina to Democrats while centrist Democrats take Senate and House races in places like Missouri, Arizona, and Kansas.

Things are so dire that internal GOP polling even looks worrisome in Georgia, according to anonymous sources within the campaign. The Clinton camp, seeing opportunity, may force the GOP to defend and spend resources in George and in Arizona, which were both supposed to be safely red. Priorities USA, a super PAC backing the Clinton campaign,

may direct its funds into Senate races in both states, according to two sources. The super PAC may begin broadcasting ads as soon as next week.

Congressional Democrats also have urged Clinton to continue utilizing campaign resources in states like Virginia and Colorado, where it is nearly certain she will win. They argue that a Clinton victory could boost Democrats in both states. In a sign that Republicans are scrambling to somehow still maintain their Congressional majority, several Senate candidates have already prepared ads asking voters to elect them to preserve Republican interests should Clinton win the White House--a tactic once employed in the Clinton/Dole race when it was clear Dole had little chance of prevailing.

As evidence of her willingness to go after Congressional seats, during a visit to Miami on Tuesday, Clinton criticized both Trump and Sen. Marco Rubio for climate change denial. “We need to elect people up and down the ballot, at every level of government, who take it seriously,” Clinton said. “It is an unacceptable response for Marco Rubio, when asked about climate change, to say, ‘I’m not a scientist.’” A strategist told reporters that super PAC Priorities USA will seek to defeat Rubio should it decide to take on the Senate.

With polls now showing Trump behind in the key battleground states of Pennsylvania, Florida, Ohio and North Carolina, and national polls giving her between a 5 and 11 point lead, many GOP candidates are effectively conceding the race for the White House and now want to focus on stemming the tide. Whether the tactic will succeed will depend ironically on how much further damage Trump can do to his own prospects.