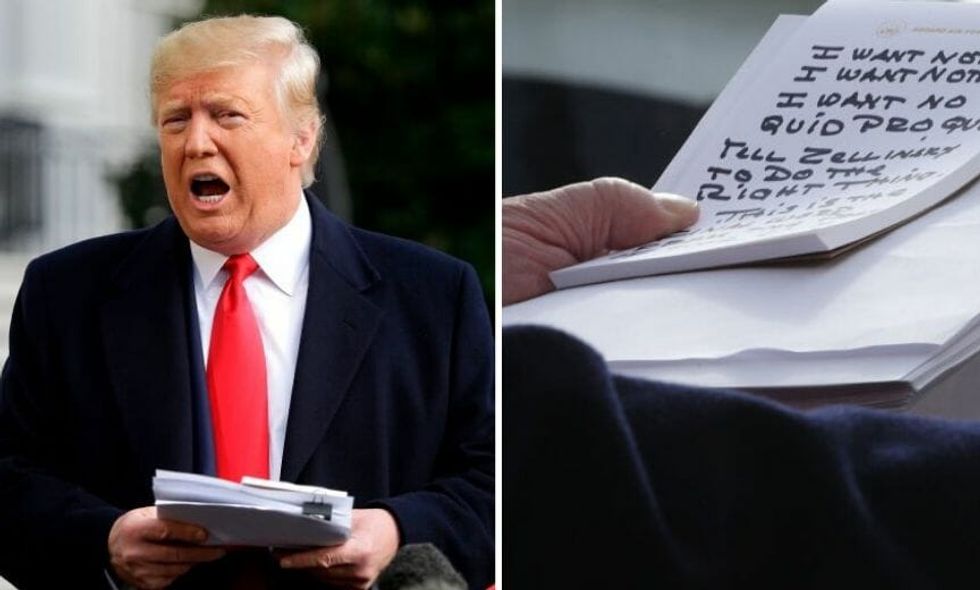 Ambassador to the European Union, Gordon Sondland, testified before the House Intelligence Committee in what many saw as a damning testimony against President Donald Trump.

After further confirming there was, in fact, a quid pro quo instructed from the President through his personal lawyer and unofficial Ukraine diplomat Rudy Giuliani, Sondland also testified that those in the highest levels of Trump's administration, Vice President Mike Pence and Secretary of State Mike Pompeo, knew of his efforts.

The one piece of evidence Republicans are using in their favor is Sondland's testimony that the President told him in a September 9 phone conversation that he wanted "no quid pro quo" and "nothing" from Ukraine, only for Ukrainian President Volodymyr Zelensky to "do the right thing."

The New York Times article first reporting on the link between investigations into former Vice President Joe Biden and Ukrainian aid withheld by the White House just happened to be published the same day of that call.

Never one to forego a chance at misleading the public, Trump trotted onto the White House Lawn regurgitating that defense to reporters.

That was when a picture of Trump's handwritten notes went viral.

I WANT NO QUID PRO QUO. TELL ZELLINSKY [sic] TO DO THE RIGHT THING.

THIS IS THE FINAL WORD FROM THE PRES OF THE U.S."

The all-caps notes, which misspelled the name of the foreign leader who's one of the key players in the scandal, drew widespread ridicule across the internet.

They couldn't believe it was real.

What does it say about both Trump's mental capacity and innocence if he needs to remember the so-called facts he's claimed all along?

As "I WANT NOTHING" began to trend on Twitter, others again pointed out the odd timing of the call Trump quoted.

I did. I found it incredibly telling that the President had a conversation with Sondland on September 9, the day af… https://t.co/b30oLjIGfy
— Susan Hennessey (@Susan Hennessey) 1574272202.0

Trump's "no quid pro quo" comment to Sondland on September 9 was clearly put in his mouth by a lawyer because of th… https://t.co/xlQoGwsKeh
— David Rothkopf (@David Rothkopf) 1574283304.0

The hold on aid was released two days after the call and report.