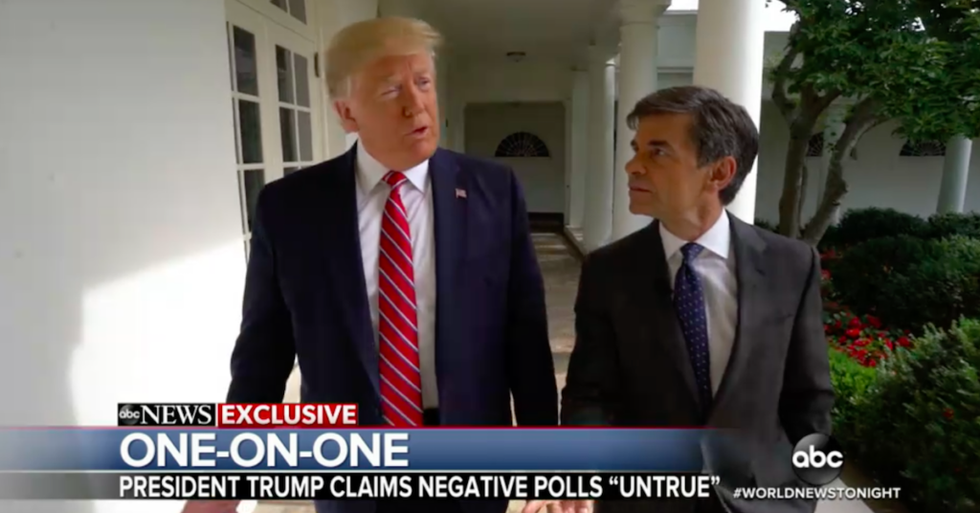 It is no surprise to most people that President Donald Trump has issues with the truth. Multiple organizations track the lies, half-truths, inaccurate statements and misleading information Trump shares on Twitter and in his dealings with the press.

But according to the man himself, President Donald Trump is a champion of the truth.

In an ABC News interview, Trump told George Stephanopoulos the reason he dislikes polls showing him losing in the 2020 presidential election is because they are "fake news" and not true.

Stephanopoulos asked the President, regarding the poll results:

"Why does it bother you so much?"

"Because it’s untrue. I like the truth. You know, I’m actually a very honest guy."

People were quick to refute the President's claim.

People were in agreement that Trump's dishonesty is a rampant and consistent pattern.

“The consistent pattern here is he is not someone … who cares a whole heck of a lot about whether he is adhering to… https://t.co/JbHHEArR4e
— CNN Newsroom (@CNN Newsroom) 1560457687.0

This never happened. Warner, trying to get in touch with Christopher Steele, texted with a Washington lawyer-lobbyi… https://t.co/wdD1fYQ6A4
— Daniel Dale (@Daniel Dale) 1560451312.0

Schiff spoke in 2017 to Russian pranksters who purported to be a Ukrainian politician with damaging info on Trump.… https://t.co/ol7H8GecEQ
— Daniel Dale (@Daniel Dale) 1560451608.0

@realDonaldTrump False again. You and your admin altered video about Acosta and about Pelosi. You’re anti-American.… https://t.co/7wPh7qHese
— Lesley (@Lesley) 1560459922.0

In addition to The Washington Post fact checker that tracks President Trump's lack of honesty, the Toronto Star also keeps tabs on Trump's less than honest statements. CNN is also tracking the statements that can be proven wrong.

A very honest guy appears to be the latest less than honest claim from President Trump.