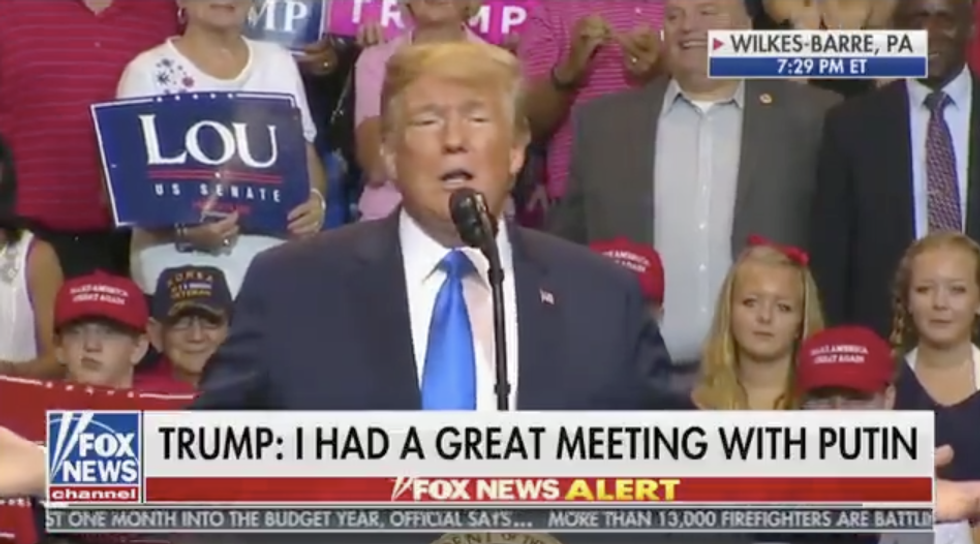 President Donald Trump continues to double down on his claims that Russia doesn't want him in the White House.

Mr. Trump made the assertion at a rally for Congressman Lou Barletta (R-PA) in Wilkes-Barre, Pennsylvania on Thursday.

“I’ll tell you what, Russia is very unhappy that Trump won, that I can tell you. But I got along great with Putin.”

Trump receives warm applause when he mentions his secret meeting with Putin. He then lies and says Putin was unhapp… https://t.co/UjIcXIpWt7
— Aaron Rupar (@Aaron Rupar) 1533252784.0

It's a claim the president has made before:

Trump's claims were contradictory to Russian President Vladimir Putin's own words at the two leaders' joint press conference in Helsinki last month, in which a reporter asked Putin if he wanted Trump to win.

Trump's latest regurgitation of the lie came just hours after his National Intelligence Director, Dan Coats, appeared in the White House Briefing Room to caution that Russia's efforts to influence and manipulate midterm elections are an ongoing threat. The intelligence community has also unanimously agreed that the Russian government unleashed a concentrated effort during the 2016 presidential campaign to help Donald Trump achieve the presidency.

Americans across social media were quick to remind the President of Putin's support.

Trump just said that Russia was "very unhappy" when he won the election. Putin himself said at the Helisnki summit… https://t.co/x3Cj8mO9UK
— Kyle Griffin (@Kyle Griffin) 1533253202.0

It was far from the only unsettling moment at the president's rally in Wilkes-Barre.

Over the course of the evening, Trump made numerous false assertions.

One of the falsehoods was hearkened back to one of the inaugural lies of Trump's presidency: crowd size.

Trump insisted that he continued to draw bigger crowds than Beyoncé, Jay-Z and Bruce Springsteen. If, as the president has previously claimed, his crowds drew upwards of over 40,000 people, the number is nowhere near comparable to the larger crowds drawn by the nation's biggest stars. What's more, their events primarily charge for entry, whereas a Trump rally is normally free.

The president also made false assertions about highways, saying that they'd taken over 20 years to get approved until his administration lowered it to two. In reality, the approval process for these highways take three to six years on average.

Trump touts cutting regulations to build highways: "Highways would take 21 years to get approved. We have it down t… https://t.co/DcIemUa7jq
— Aaron Rupar (@Aaron Rupar) 1533252290.0

Then there was the all-too-familiar vilification of the press.

“They can make anything bad because they are the fake, fake disgusting news.”

This came the day that White House Press Secretary Sarah Huckabee Sanders refused to say in a press briefing whether or not the press was "the enemy of the people," as Trump has asserted multiple times.

The rally did, however, reinforce one harsh truth: Despite documented falsehoods and contradictions, Trump's base remains loyal to him and angry at others.