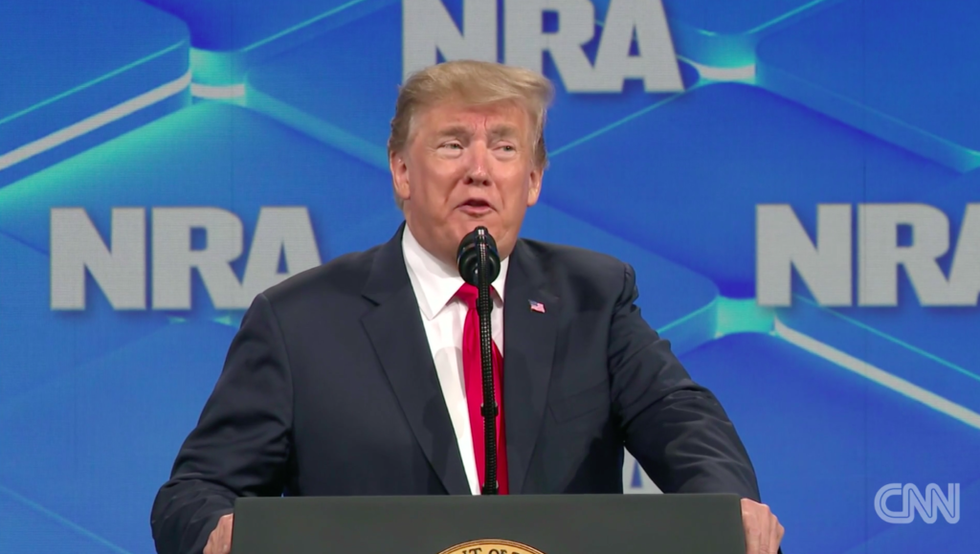 President Donald Trump left the White House Friday to travel to Indianapolis, Indiana for the National Rifle Association (NRA) convention. The President delivered a speech before the attendees that raised eyebrows and criticism.

One area of contention is Trump's use of the mass shooting in Paris, France to advocate for fewer sensible gun control laws, like universal background checks. Repeating the NRA rhetoric of the "good guy with a gun," Trump claimed if only the "other side" in the Paris mass shooting had one gun, things would have turned out differently.

But the exploitation of the Paris tragedy was not the most disturbing part for many. It was the choice by President Trump to act out the gesture of shooting with his hand while relaying his version of events in France.

Despite law enforcement stating when they arrive at a scene of a shooting, the "good guy with a gun" is a "second gunman" that they do not have time to suss out, the NRA brings up this rhetoric after almost every mass shooting. The exception being when the victims have been Black or Muslim.

@maddezmom @atrupar He conveniently forgets things. You know, always in the moment for the benefit of the audience in front of him.
— The octopus said… (@The octopus said…) 1556299742.0

They also called out the President's favorite validation for his claims: many people say, many debates had, many experts...

Others called out flaws in the logic of one or more people consuming alcohol while carrying weapons being able to act quickly and efficiently in a crisis.

@atrupar There were also suicide bombers in the Paris attacks. Does Trump think everyone should strap on a bomb, j… https://t.co/nywksbEafK
— Oreo (@Oreo) 1556301201.0

The NRA is one of the largest gun rights lobbies in the United States, donating millions to mostly Republican candidates and campaigning to block laws for universal background checks and making it illegal for those convicted of domestic abuse or stalking to own a firearm. The organization recently faced backlash after ties to Russian operatives and funding were revealed.