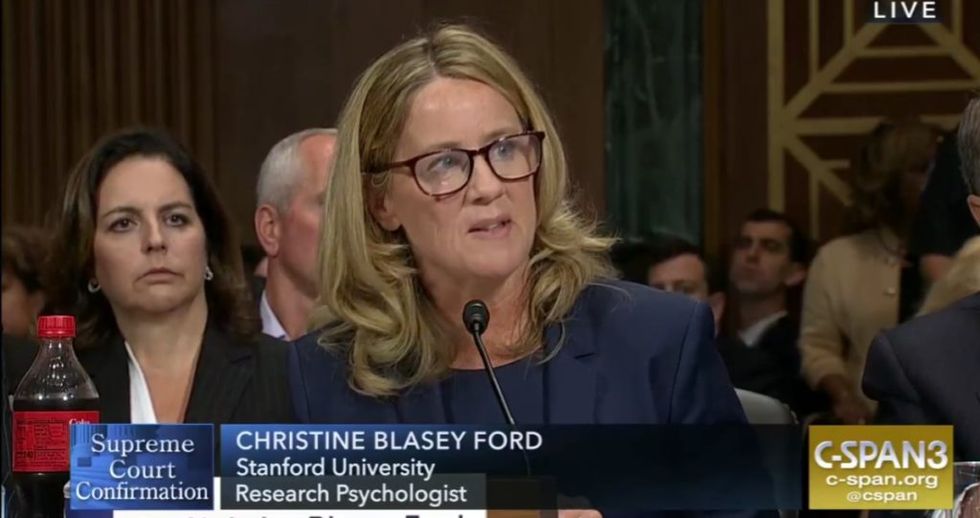 Thursday, many in the United States watched the highly anticipated testimony of Dr. Christine Blasey Ford before the Senate Judiciary Committee during the confirmation hearing for President Donald Trump's Supreme Court nominee. Dr. Ford alleged Brett Kavanaugh sexually assaulted her when she was 15 years old.

But people also wondered if Trump himself watched the proceedings. The President's preference for getting his news and information from television versus the printed word is well documented.

While the President can generally rely on Fox to give him good news, today's coverage even on that network presented Ford as "highly credible."

This bodes ill for the President's nominee, which cannot sit well with the man himself. And according to those same sources, it has not.

Person close to Trump says Trump is raging at how bad this has been for Republicans so far. Trump told people Ford… https://t.co/8n4RFxrziZ
— Gabriel Sherman (@Gabriel Sherman) 1538064792.0

@gabrielsherman @christinawilkie What is striking here is how Trump is only concerned with how she comes off on TV,… https://t.co/1A36LwUCpR
— Forrest Brakeman (@Forrest Brakeman) 1538065800.0

People could certainly understand why Ford's testimony would upset the President.

In addition to Ford's credible testimony, the GOP came off poorly during her portion of the hearing as well. With the midterm elections looming on the horizon, alienating female voters could prove disastrous in November.

@gabrielsherman The Republicans seem to be handling this in a way that's lose-lose: Kav is sinking, before our eyes… https://t.co/mJXnzgDNck
— Steve Kettmann (@Steve Kettmann) 1538065040.0

@ClaudiaWheatley @SteveKettmann @gabrielsherman I'm 44 and was a teenager during those hearings. I was absolutely h… https://t.co/IoG8SltN3x
— Wendy Darling (@Wendy Darling) 1538066734.0

@SteveKettmann @gabrielsherman This is bringing up memories for older women who realize it didn't have to be that w… https://t.co/nvbLtTY4Wi
— miss speech (@miss speech) 1538073306.0

As Brett Kavanaugh takes over to end the day's hearing, it is hard to say how the President will feel by  tomorrow morning.