Donald Trump Somehow Made His Visits to El Paso and Dayton All About Him in This Over the Top Campaign Style Video, Because of Course He Did 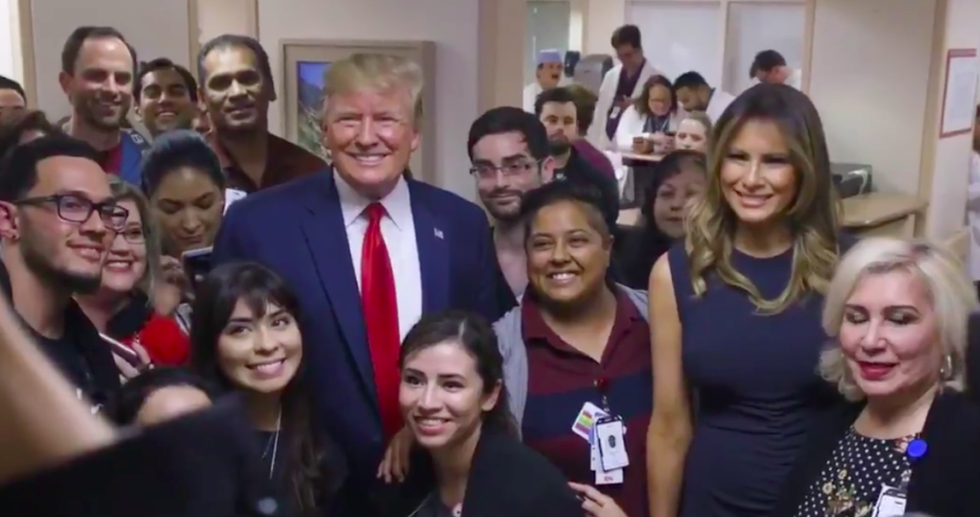 On Wednesday, President Donald Trump visited the cities of Dayton, Ohio and El Paso, Texas. The two cities saw devastating mass shooting attacks over the weekend while President Trump was out of Washington DC at his New Jersey golf resort.

The press corps that travels with the President on Air Force One was told—first in Dayton then again in El Paso—there was no reason for them to leave the plane as the visits were to be completely about the victims and not a photo op for the POTUS and FLOTUS. But shortly after each visit, professional photos and video taken, edited and produced with accompanying music were posted to Twitter by Trump, the White House Twitter account and members of the Trump administration, one of whom described the visit to victims of gun violence as the President being treated "like a rock star."

People noted the progression to the final video featuring less footage of meeting or comforting victims and more and more displays of the President's apparent popularity—culminating in the last video being only about hospital personnel's enthusiasm over getting photos of Trump.

Not a single victim meeting is shown in the final video which compiles footage from Dayton and El Paso. The last video is now pinned on the Presidents Twitter page.

Watch the videos in order here.

After making it clear no other cameras were allowed because it was not a photo op, people are crying foul over the production value—including soundtracks—put into the multiple videos.

Also a sticking point is the repeated emphasis by Trump and members of his staff on how popular the President is versus any mention of the tragedies, their causes or possible solutions to mass shootings in the United States.

This doesn’t feel right. This video is released days after El Paso and Dayton, but you wouldn’t know what it was ab… https://t.co/VxUeVdZk6c
— Keaton Raney (@Keaton Raney) 1565273195.0

Although in El Paso, apparently there was a reason no victim visits were included.

@realDonaldTrump People who get what you are didn’t want to be part if your gross self-promoting videos, complete w… https://t.co/1DTXRZftLh
— Ichabod (@Ichabod) 1565275037.0

However if the sole point of the visit was to comfort victims and not a photo op, why still go if the victims refuse?

@realDonaldTrump You barred the press from accompanying you inside and instead, on taxpayers dime, your team assemb… https://t.co/XfeYYgGTVh
— Mia Farrow (@Mia Farrow) 1565269128.0

To many online, the Trump administration coverage of the visits looked very much like photo ops and campaign ads full of big smiles and thumbs up while the victims were little more than set dressing and props if they were shown at all.

People were less than pleased with the tone and emphasis.

At least one of the mass shootings has been labeled a domestic terror attack by a White nationalist and a potential hate crime by law enforcement. The decision was based on the shooters statements during arrest and his online manifesto where the terrorist quotes talking points made popular by the President.

The second attack is still under investigation as the perpetrator revealed no set motive, his online activities bounced around the political spectrum and died on scene after murdering his own brother, Jordan Cofer.

If you want to make a statement about gun violence in the United States, this shirt is available here.