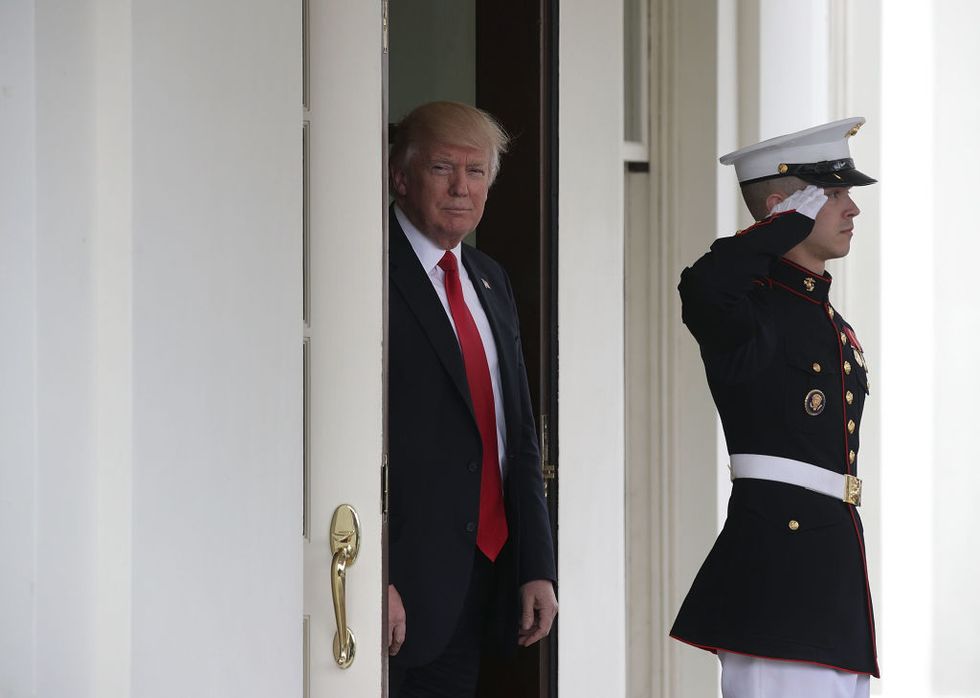 Earlier this morning, President Donald Trump urged Democrats to "come back from vacation now" and vote on border security amid a partial government shutdown.

"I'm in the Oval Office," the president wrote on Twitter.

I’m in the Oval Office. Democrats, come back from vacation now and give us the votes necessary for Border Security,… https://t.co/anAk2LBNsa
— Donald J. Trump (@Donald J. Trump) 1546270634.0

POTUS tweet minutes ago claimed he was in the Oval Office. No marine there so that’s another lie. ⁦@realDonaldTrump⁩ https://t.co/rnJnQt88HO
— Brian J. Karem (@Brian J. Karem) 1546270582.0

A marine sentry at the door of the Oval Office signals the president is inside. The Obama administration once produced a video which, while about the Marines' feelings toward Christmas trees, explains some of the history behind this tradition.

People weren't surprised that Trump wasn't there. This is, after all, a president who keeps fact checkers in overdrive.

@BrianKarem @realDonaldTrump He’s going to MaL. There is absolutely no doubt in my mind. His trip to Afghanistan ta… https://t.co/zgY3kasr1m
— Jane Peterson (@Jane Peterson) 1546271174.0

There is indeed going to be a New Year's Eve party at Mar-a-Lago tonight. According to government spending data, the Secret Service paid Grimes Events & Party Tents Inc. of Delray Beach, Florida, $54,020 on December 19 for “TENT RENTAL FOR MAL.”

Some appeared to defend the president, saying his tweet "is just a metaphor."

The "metaphor" comments appear to relate to Senator Lindsey Graham's claim that the border wall the president has proposed is nothing more than a “metaphor” for border security.

The government has been partially shut down since the president opted not to sign a stopgap funding bill which would have avoided a shutdown but did not allocate the $5 billion in funds he’d demanded for his proposed wall along the U.S.-Mexico border.

On Saturday, the president wrote he was “waiting for the Democrats to come on over and make a deal on Border Security” but said they were too busy with “Presidential Harassment.”

The government shutdown is the third of Trump’s presidency. It will likely not be resolved until Democrats are sworn in on January 3.

Brian Karem's quick sleuthing comes after presidential counselor Kellyanne Conway was caught on vacation in Florida shortly after she criticized Nancy Pelosi for vacationing in Hawaii.

“Nancy Pelosi needs to come back from Hawaii. Less hula, more moola for the [Department of Homeland Security] and Customs and Border Patrol, funding our border security,” Conway said during a Fox News interview yesterday.

Internet sleuths soon discovered that right after criticizing Pelosi, Conway flew to West Palm Beach, Florida, for a vacation of her own, an act which made her vulnerable to immediate criticism.

@KellyannePolls Ur In FLA on Vaca mar a lago; @stevenmnuchin1 on vaca; @IvankaTrump on Vaca; @realDonaldTrump alway… https://t.co/9E3YTe9sRJ
— OfficialMike (@OfficialMike) 1546230635.0

Conway’s criticism prompted Pelosi spokesman Drew Hammill to release a statement saying Pelosi had been in her hometown of San Francisco since Saturday. Pelosi is currently back in Washington and plans to work today and tomorrow. Hammill noted that no congressional leaders––Republican or Democrat––are currently in Washington, D.C.