Donald Trump Just Escalated His Racist Claims About the Caravan of Migrants Headed to the Border, and People Are Calling Him Out 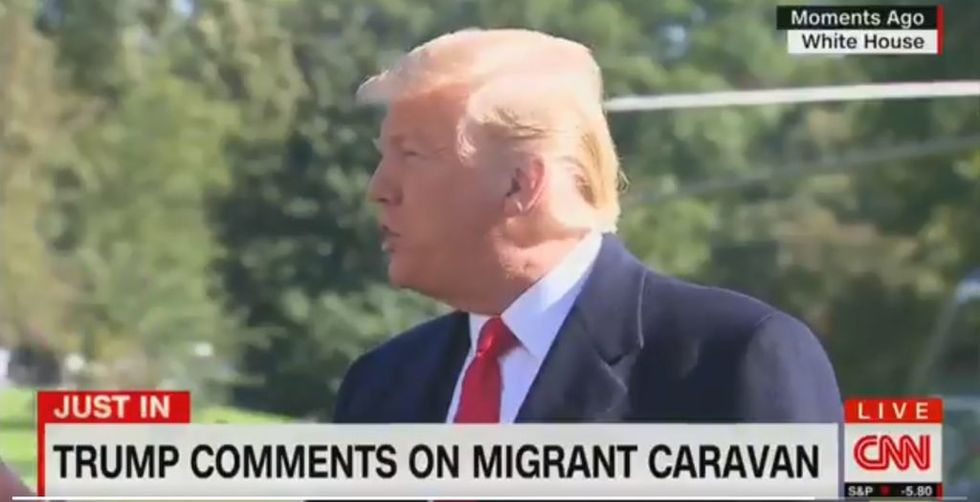 As approximately 7200 migrants continue to caravan to the United States border, Donald Trump continues to sow fear against them.

The president has used the numbers and races of those seeking to enter the country to paint the picture of an American invasion when, in reality, these caravans have happened before and due to the thousands of miles required of the journey, the numbers are usually down to only hundreds by the time the groups actually arrive at the border.

Nonetheless, the president continued to vilify the asylum seekers making the arduous trek to the United States.

Trump claims, without evidence, that if journalists "took cameras" into the migrant caravan, "You're going to find… https://t.co/hUSKi3WOs2
— Aaron Rupar (@Aaron Rupar) 1540238681.0

The president has frequently stoked the irrational fears of his base by invoking the Middle East and the gang MS-13.

Today as he doubled down on the comments, people are making sure to call the president out for the many holes in his logic.

Others asked exactly what he meant.

When the president said reporters would find "everything," Twitter users were quick to pounce on his lack of specificity.

Others told him what the media would really find (and has found).

@atrupar We're going to find families with children - so desperate for a safe home for their children they will emb… https://t.co/VWnSi7bgpT
— Cathy Coleman (@Cathy Coleman) 1540239329.0

The Trump administration - with regulations cracking down on who can seek asylum and with the separation of children from their parents - has repeatedly proven that it does not hold the humanity of immigrants in high regard, instead choosing to characterize the lot of them as criminals, similar to the way then-candidate Donald Trump did at the start of his campaign.

It is unclear why Trump believes there are Middle Eastern people among the caravan or why being Middle Eastern alone is enough to be cause for concern.

The caravan currently has over 1,100 miles to go before reaching the United States border. We're sure the Trump administration won't make the already hazardous journey any easier.