Donald Trump Just Managed to Make His Visit With Hurricane Florence Victims About Himself, Because of Course He Did 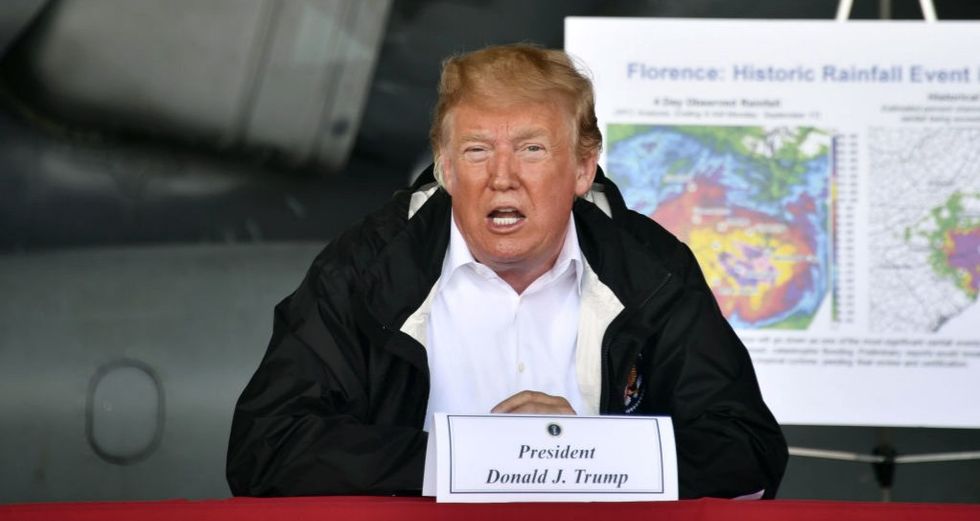 The group convened to discuss the devastation caused by Hurricane Florence. 37 people died as a result of the storm, 27 of those from North Carolina.

An official from Duke Energy spoke about their efforts to restore utility service to their customers. When she finished, Trump asked her one question that caused a few chuckles among those in attendance, but outrage from others.

The worst of the storm tore across the coastline of North and South Carolina on Thursday into Friday. Hurricane Florence made it to the Charlotte, North Carolina, area over the weekend as a tropical depression with wind speeds around 35 mph.

While Duke Energy reported about 12,300 homes without power in the Charlotte area on Monday morning, that did not compare to the 630,000 homes they reported along the coast. Lake Norman sits north of Charlotte. While low lying areas flooded due to heavy rains, the most devastating impact of the storm fell miles away along the coastline.

So why ask an energy official about a much less devastated area instead of asking about restoring power to those most affected?

President Trump owns a golf course on the shores of Lake Norman. A power outage would cost the Trump Organization in lost revenue.

This is not the first time the President drew criticism for thinking of himself in times of crisis. After the Unite the Right rally in Charlottesville, Virginia, Trump brought up the winery he owns there.

When reporters asked about the volatile situation in Charlottesville—that resulted in the murder of Heather Heyer and injuries to 19 others when a white supremacist drove his car into a crowd of counter protesters—Trump stated:

"It is the winery. I mean, I know a lot about Charlottesville. Charlottesville is a great place that's been very badly hurt over the last couple of days."

"I own actually one of the largest wineries in the United States, it's in Charlottesville."

But it could be something else entirely.

When speaking of most events, the President displays a definite pattern of inserting himself into the situations however he can. When he spoke of the death of Aretha Franklin, Trump made claims of knowing her well and stating she worked for him many times.

His comments then angered people as well. All records indicated they met in passing 2 or 3 times and Franklin never worked directly for Trump.

When he spoke last month of the 2020 Republican Convention taking place in Charlotte, he bragged about his golf course instead of congratulating the city as he intended. He said:

"You know where my club is, right? Trump National. It’s a very big success on Lake Norman. Beautiful. Largest man-made lake in the world by far, right?"

Trump's schedule indicated he would return to the White House Wednesday evening.