Donald Trump Just Got Played by Kim Jong Un Again, and People Are Calling Him Out 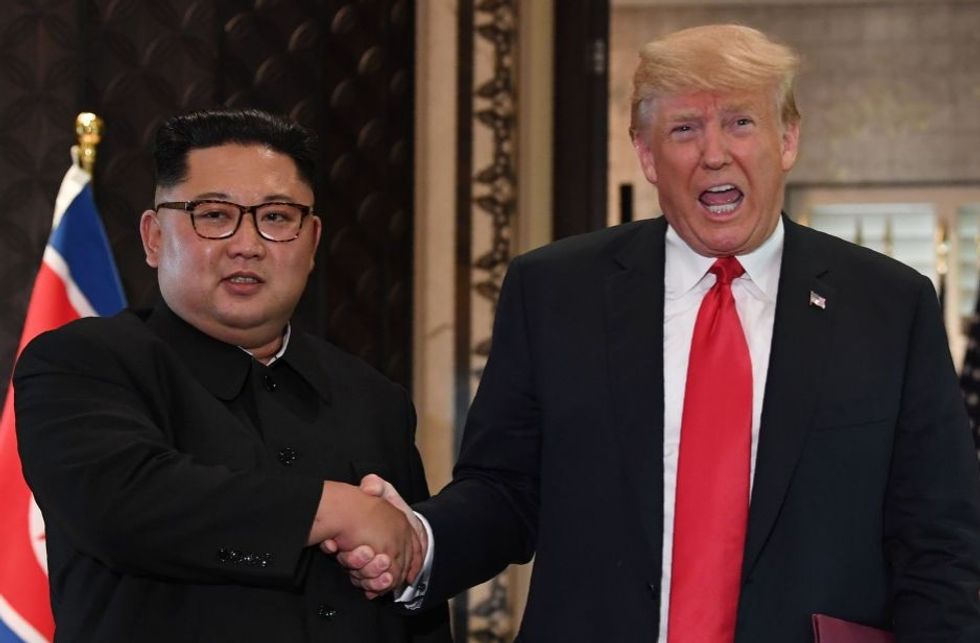 On Sunday, North Korea held a military parade and a massive celebration to mark 70 years since becoming a nation. Notably, the parade had a conspicuous omission: no inter-continental ballistic missiles were featured in the parade as they usually are.

So predictably, President Donald Trump took to Twitter to hail the move as a triumph of his own diplomatic efforts with Kim Jong Un:

The news from the U.S, intelligence community, however, shows that the president's reaction is rather naive.

The latest evidence from U.S. intelligence indicates that Kim has not ceased his nation's nuclear weapons program and has "escalated efforts to conceal its nuclear activity," according to three senior U.S. officials. They say that since the June 12 Singapore summit between Kim and Trump, North Korea has erected structures to conceal the entrance to at least one warhead facility. The Trump administration has launched a "maximum pressure" campaign against North Korea in response.

But the president isn't acting as if he's received the memo. A few days prior, Trump praised Kim for having "unwavering faith" in him.

Kim Jong Un of North Korea proclaims “unwavering faith in President Trump.” Thank you to Chairman Kim. We will get it done together!
— Donald J. Trump (@Donald J. Trump) 1536231521.0

Given the confirmation that North Korea's nuclear weapons program continues unabated, Trump is being called out for claiming a premature victory.

@realDonaldTrump So why are they continuing their nuclear research program? Pompeo was basically rebuffed by NK.… https://t.co/NhXpAigxUl
— Bill Y (@Bill Y) 1536506715.0

@realDonaldTrump @FoxNews So the president of the US just stated he likes dictators who control the press, and kill… https://t.co/deBPKxSied
— Tipsy Tiffany (@Tipsy Tiffany) 1536541472.0

A spokesperson for the National Security Council said Trump is personally directing the Trump administration's pressure campaign against North Korea.

The president closely directs every aspect of the administration's DPRK policy including the negotiations and the pressure campaign. He is clear-eyed about the challenges and sees this as a unique and fleeting opportunity to use diplomacy to achieve our objectives," they said.

The production of nuclear weapons isn't the only way North Korea is defying its agreements with the United States. NBC confirmed last week that China "escalated both legal and illegal trade with North Korea since the Singapore summit, in defiance of sanctions":

From coal shipments to revived construction projects to planes ferrying Chinese tourists to Pyongyang, China has reopened the door to both legal and illegal trade with the North, throwing the North Korean government a vital lifeline while derailing U.S. diplomacy. North Korea depends almost entirely on its larger neighbor to keep its economy afloat.

An international coalition which includes military ships from the U.S., U.K., France, Australia, New Zealand, Japan, and South Korea, has patrolled waters for months and a senior U.S. official says the coalition would soon begin to publicly denounce those who violate sanctions at sea.

But James Faeh, a former Pentagon desk officer focused on Korea, says more sanctions would not get North Korea to denuclearize.

This is highly unlikely to work," he said. "Keeping pressure on North Korea in a tangible way is the right path forward, but that has to involve outreach to other countries in the region and holding their feet to the fire about their cooperation with the brutal North Korean regime."

Trump's admiration for dictators has been well documented, and in June, shortly after the Singapore summit, he called Kim  a “smart guy” and a “great negotiator.”

“He’s a tough guy. Hey, when you take over a country, tough country, tough people, and you take it over from your father, I don’t care who you are, what you are, how much of an advantage you have, if you could do that at 27 years old, I mean, that’s one in 10,000 that could do that,” Trump told Fox News’ Bret Baier at the time. “So he’s a very smart guy, he’s a great negotiator, but I think we understand each other.”

The president’s comments are particularly alarming when one considers Kim’s human rights record, which is widely considered the worst in the world. The North Korean representative’s human rights abuses are lengthy and include torturing, starving, and killing his own people and charges of indefinite detention.

The president also addressed Baier’s concerns that he had offered North Korea several concessions, including the cessation of military-preparedness training with the South Koreans and the possible removal of U.S. troops from the Korean Peninsula. The president’s critics allege that these concessions––diminished American influence on the penninsula––are precisely what China wants.

To that, Trump said that the Chinese have been “very helpful”:

No, I think China would really like to see no nuclear weapons, you want to know the truth, because look, whether you’re semi-friendly with a nation or not, when they have nuclear weapons and you’re that close, that can’t be a positive feeling. t just can’t be. So China’s been very helpful. I think over the last two months, maybe less so. I think the border got a little more open. Now, it didn’t affect today’s negotiation, but I think the border opened up a little bit more because China could be a little bit upset about trade because we’re very strongly clamping down on trade.

The day before, members of the press and the general public found themselves flummoxed by a five-minute film made by or on the orders of Trump’s White House which depicts the president and North Korean leader Kim Jong-un in what the president characterized as an elevator pitch.

"Of those alive today, only a small number will leave a lasting impact,” the narrator says near the video’s start, as shots of Trump, Kim and North Korean pageantry appear on the screen. “And only a very few will make decisions or take actions to renew their homeland, or change the course of history.”

The film progresses, showing images from the Korean War.

“The past doesn’t have to be the future,” the narrator says. “What if a people that share a common and rich heritage can find a common future?”

The video proceeds into a montage of destruction from the conflict before giving way to what The Washington Post refers to as a “science-fiction like version North Korea,” in which “crane-dotted skylines, crowded highways, computerized factories and drones” signal what the country could become should Kim choose to forge positive relations with the United States.

“You can have medical breakthroughs, an abundance of resources, innovative technology and new discoveries,” the narrator continues, before concluding, in pure Hollywood movie trailer fashion: “Featuring President Donald Trump and Chairman Kim Jong Un in a meeting to remake history.”

Reporters expressed disbelief and the president maintains that the film is an elevator pitch, similar to what he, during his time working in real estate, would have used to persuade potential investors to finance a hotel.